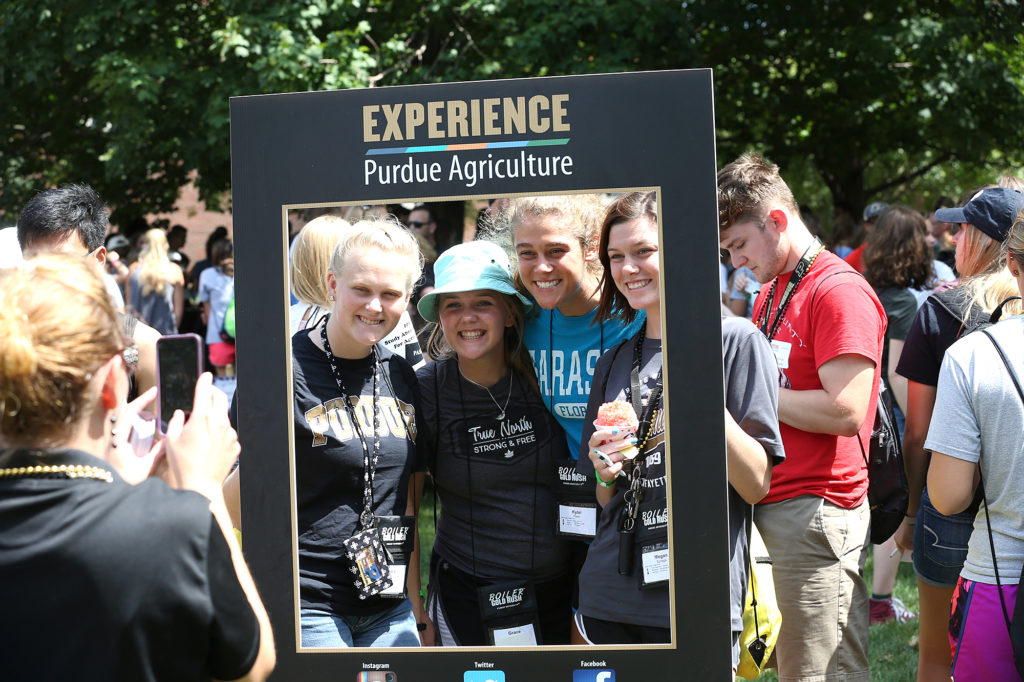 The College of Agriculture, which offers 31 different majors ranging from agribusiness to turf management and wildlife, welcomed 643 new undergraduate students as part of its 2017-18 incoming class. As a result, the total undergraduate class of 2,782 students — the largest since 1982.

Interest in graduate studies also has been increasing. For fall 2017, 690 graduate students were enrolled in the College of Agriculture.

“It is a great time to be part of Purdue University and the College of Agriculture, and our strong enrollment figures attest to this,” exclaims Marcos Fernandez, associate dean and director of academic programs for the college.

The latest incoming class for the College of Agriculture also reflects a significant number of students with Indiana roots. Of the 570 first-year students accepted, 75 percent are Indiana residents. New students arriving at Purdue represent 82 of Indiana’s 92 counties. Including current students, Purdue Ag students come from all 92 counties, according to data from the Purdue Office of Admissions.

In addition, when asked what influenced them to major in an agriculture-related field at Purdue, the top five factors included: being able to make a difference in my career; related to my hobbies; working with animals; work experiences and future job market.

Kerri Swingley of Selma, Ind., who is working at DuPont Pioneer as a production agronomist under its Emerging Leaders Program, said Purdue provided studies that were “applicable to real-life scenarios as a professional in the agriculture industry.”

“I chose Purdue for the combination of opportunities it has for students, the world-renowned reputation of the agriculture program, and the family-like environment of Agronomy,” the 2016 graduate added.

Alacyn Cox of Walkerton, Ind., who also graduated from Purdue in 2017, is now working at John Deere in marketing. “I chose my major before deciding on a college,” she recalled. “Once I chose agricultural engineering, the rest was easy. Purdue’s Agricultural & Biological Engineering program is ranked #1 in the country.”

The growing popularity of agriculture-related majors is a nationwide trend, spurred in part by an ongoing demand for college graduates with agriculture degrees. Purdue’s College of Agriculture reported that 95 percent of its 2016 graduating class already landed jobs or were continuing their education.

Students graduating from agriculture programs should continue to see high employment rates in the next few years, according to a study released by the USDA in partnership with Purdue University in 2015. Employment Opportunities for College Graduates in Food, Agriculture, Renewable Natural Resources, and the Environment, 2015-2020, revealed that this trend should continue throughout 2020.

The recent statistics also revealed that the state of Indiana would retain a significant amount of the talent. Nearly 60 percent of the graduating students with jobs chose to work in Indiana. Of the 98 students continuing their education, more than 50 percent are studying at Indiana schools.