How a life on Mars simulation in the deserts of Utah helped this recent ABE graduate learn more about his field and himself.

“As it turns out, a lot of people aren’t down with you taking swabs of their poop,” Jake Qiu said.

This was one of the many things Qiu, a 2018 graduate from Purdue University’s Department of Agricultural and Biological Engineering (ABE) program, learned during a recent simulation in rural Utah.

During December, Qiu participated in a two-week program with the Mars Desert Research Station, an organization recreating the conditions of life on Mars in the desert of Utah. The project’s objective is to conduct both scientific and human factors research to inform the realities of space travel and colonization. This involved living in close quarters in a habitat designed for space colonization, executing research projects and suiting-up in full gear to explore the surrounding terrain.

Everyone participating in the project has a role and an experiment. Qiu’s initial proposal was to obtain fecal samples to evaluate participants’ overall health and record how their gut microbes changed during two weeks of close-quarter living, reduced rations and exposure to other stressors.

“As it turns out, a lot of people aren’t down with you taking swabs of their poop.”

With the help of ABE professor D. Marshall Porterfield, Qiu redesigned his experiment to involve introducing microbes found in the living spaces of the ‘astronauts’ into the microgreens growing inside the MDRS habitat. This way, Qiu said, he could evaluate whether or not certain microbes developed into pathogenic strains, which could lead to illness.

“I swabbed the habitat, got into the toilet water, the kitchen sink water, and then inoculated the microgreens with the microbes I collected. I took all the samples, put them in sterilized water and then used that to water our greens,” Qiu explained. “The overarching idea was to see if any pathogenic strains developed and to see if microgreens proliferated these strains, which would be bad for our gutmicrobiomes.

He gathered a lot of data, which he is still processing.

Of course, Qiu continued, conducting an experiment in a simulated Mars habitat is a bit different than the research conducted in Purdue’s laboratories. Unplanned and uncontrollable circumstances are all part of the reality of conducting research in space.

“This experience makes me so grateful for the facilities we have at Purdue,” Qiu said. “For example, at MRDS we had power conservation limits, which impacted my experiments. Here at Purdue we don’t have those constraints; we even have back-up generators.”

It’s useful to understand these scientific realities before launching a mission to Mars, Qiu continued, but human factors research is equally, if not more, important. During his two weeks at MDRS, Qiu said he learned a lot about himself and how he handles stressful situations of the professional and social variety.

“This experience makes me so grateful for the facilities we have at Purdue. For example, at MRDS we had power conservation limits, which impacted my experiments. Here at Purdue we don’t have those constraints, we even have back-up generators.”

“After this, I’m definitely identifying as an introvert,” Qiu laughed. “Going forward, I’m more than comfortable being on the sidelines and supporting the process of space travel. I just don’t know if I want to be the guy on Mars for eight months or more. I don’t have to be that front page picture guy.”

While some things didn’t come as a shock to Qiu, like introverted aspects of his personality, other facets of the simulation defied expectations. 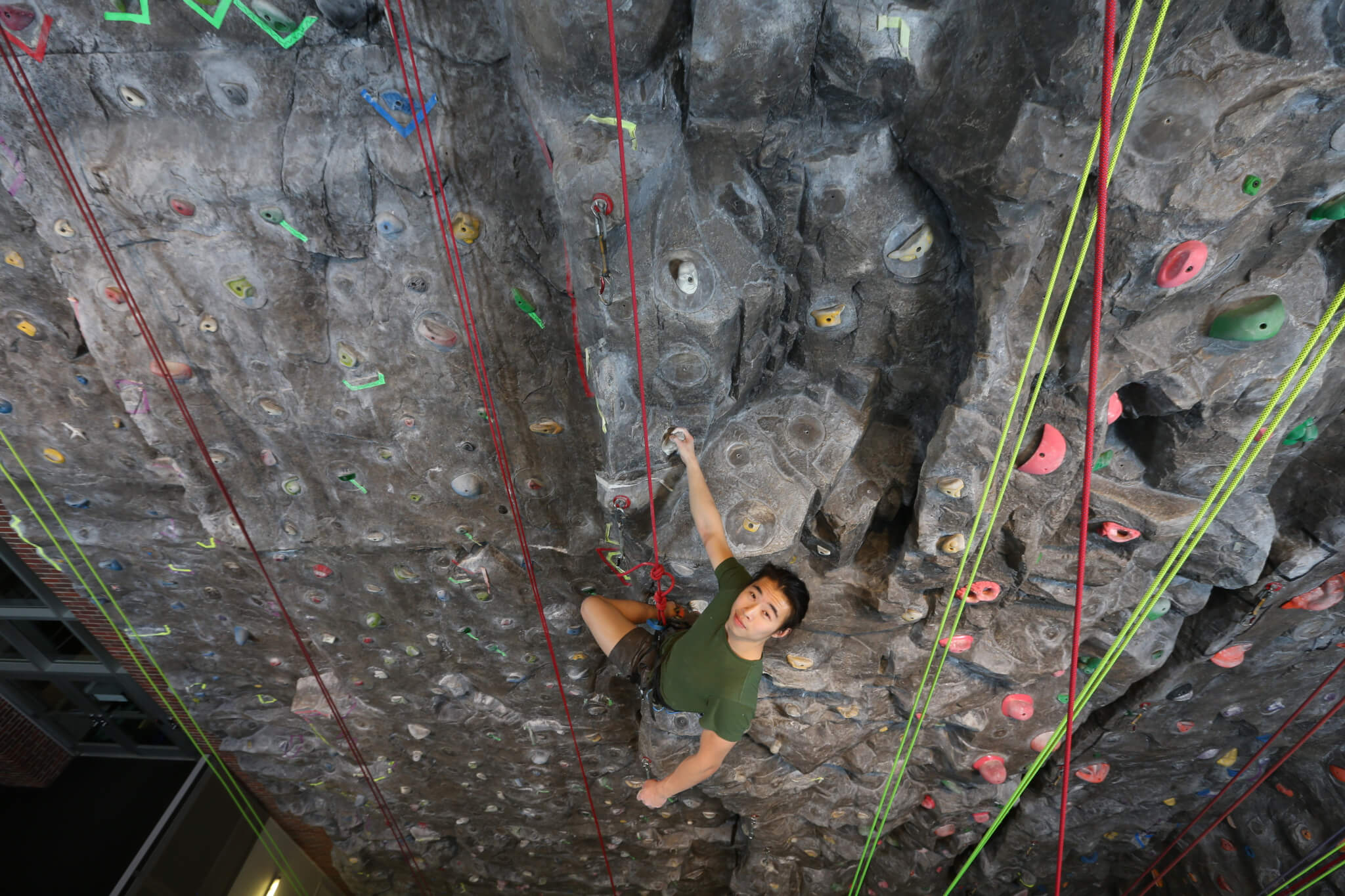 Qiu is an avid rock climber, a hobby that helped prepare him for the MDRS simulation.

Qiu, for example, was surprised by how adaptable the team’s schedule was. They operated more like a household than a barrack, adjusting schedules and meals as needed to accommodate team members. Everyone started the day together with yoga stretches and ended the day together at mealtime, he continued, but beyond that, schedules remained fluid.

And another thing that shocked Qiu? The loneliness or, rather, the lack thereof.

“I never felt very isolated,” he said. “You’re with a team and there was always someone around. Maybe you felt isolated in the grand scheme of things but in the local sense you’re never alone. I never once felt stranded.”

Although Qiu graduated last December, he’s sticking around campus to finish up some research projects with his advisor, ABE professor Mohit Verma. He is working to understand how some microbes may play a role in Inflammatory Bowel Disease. Eventually, he would like to move out west and focus on understanding the mechanistic principles behind our microbial ecology and health. As an avid rock climber, he hopes to find himself near these prime climbing locations.

It’s his climbing experience and long-hours in Purdue’s laboratories that Qiu said helped get him through his experience at MDRS.

“As it turns out, it’s not that difficult to be uncomfortable. I did lose weight and I didn’t shower much but it wasn’t bad,” Qiu elaborated. “I go on climbing trips a lot, you know, I sleep in Walmart parking lots and such. The more difficult part, for me, was the social component. It sounds cliché but after this I know more about myself. Also, I learned that not showering for 11 days is surprisingly doable.”