Indiana is home to roughly 2,000 sheep farms and over 50,000 head of sheep, making the state number 28 for sheep production in the U.S. Even with Indiana’s bountiful flocks, however, it’s unlikely you’ll find a Hoosier sheep’s wool in any store-bought knitwear.

Sheep are raised for many different reasons in Indiana, but, in most cases, wool is not their primary purpose. Most sheep are farmed for meat or breeding, and the wool they produce is a secondary commodity. A handful of small farms around the state that raise specialty breeds, like Merino or Shetland, sell the wool to hand spinners and other craftsmen for up to $10 a pound.

“The price of wool through commercial channels doesn’t support the endeavor financially, at least in Indiana,” Michael Neary, Purdue Extension sheep specialist, explained. “The only producers in the state that get a return over shearing charge for their wool are the producers that specialize in wool used by hand spinners. Wool of this type sells well and for a good price, but it is a small and niche part of the industry.”

Larry Hopkins, president of the Indiana Sheep Association and a sheep farmer, is one of these businesspersons. He said fleeces from his flock of Shetland sheep fetch a good price among hand spinners. Artisans like to work with wool from specialty breeds because of its quality, texture, versatility and the care farmers take in raising the flock. 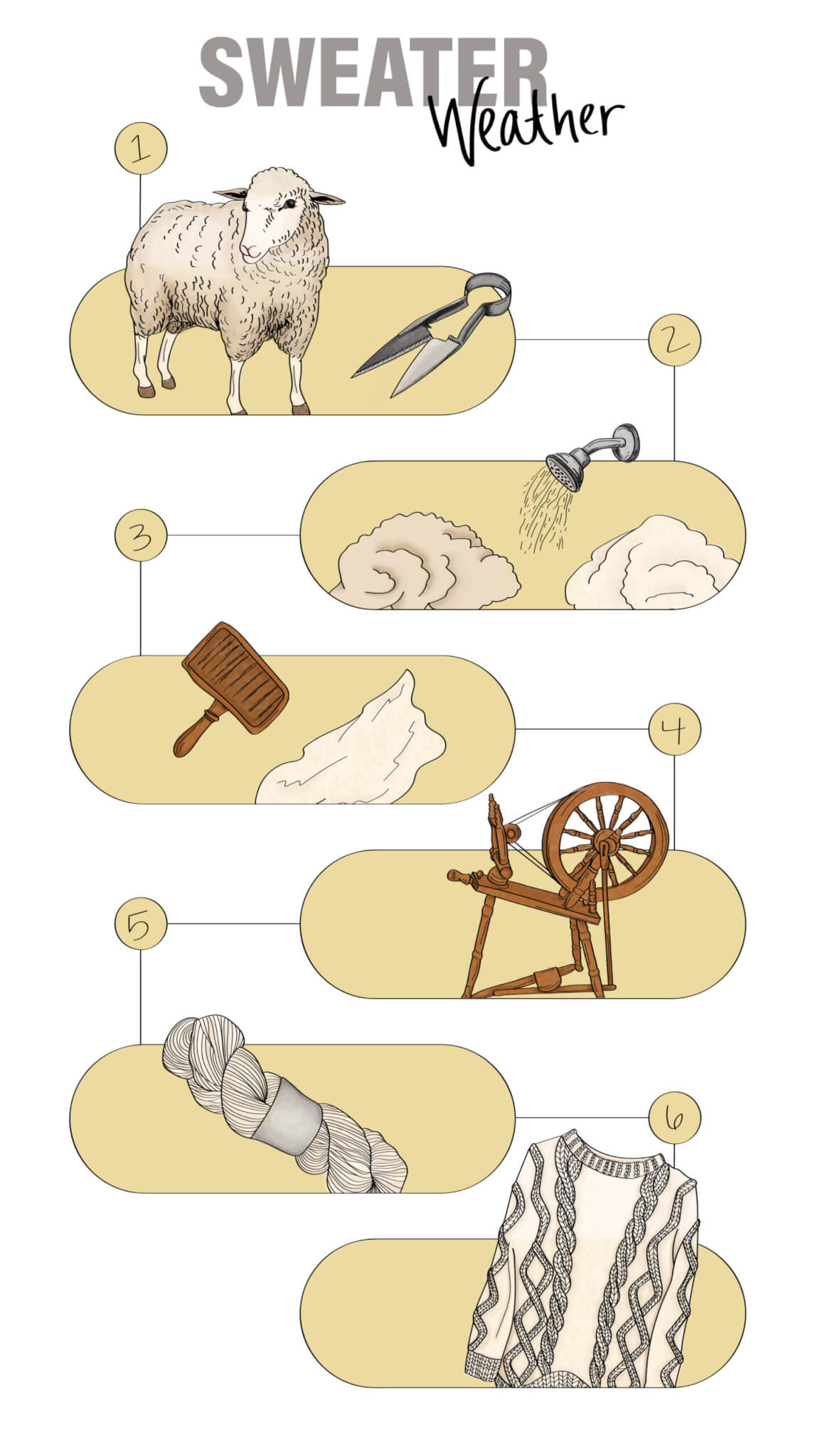 This graphic depicts all the stages hand spinners and other artisans work through when turning fleeces into yarn or roving, bundles of fiber. First, the fleeces are sheared then washed and dried. The wool is then carded, brushing to clean, untangle and integrate the fibers. The wool can then be spun into yarn.

“If we’re planning to sell the wool directly to the customer, there are some things we do differently than if we were just raising sheep for meat production or breeding,” Hopkins added. “The main thing is maintaining clean fleeces, so not having noxious weeds in the fields, like burs, and also feeding them in a way so the fleeces stay clean of hay and feces.”

Once in possession of the fleeces, the customer must process the wool before using it. This involves washing and disentangling the wool before it can be spun into yarn. While craftsmen do this by hand, at the commercial level this is done on an industrial scale.

Unlike Hopkins, most sheep farmers sell fleeces for commercial usage, at around $0.5 a pound or contract with a professional shearer, like Stephen Kennedy, to shear their flocks. Kennedy travels around the state shearing sheep and then sells the fleeces to Gronewold Fur & Wool, a commercial facility in Illinois. Kennedy has been doing this for 18 years. He learned from his father and uncle, who both learned from his grandfather.

“It’s a family business and it’s an art,” Kennedy added. “You need a lot of strength to shear a sheep. I use an unconventional method, too; it’s called the Australian method. Instead of putting the sheep on a stand, I place them on their butt. It’s faster that way if you know what you’re doing. I can shear around 150 sheep a day.”

Emma Hopkins-O’Brien, a writer for the Indiana Sheep and Wool Market Development Council, housed within the College of Agriculture, is also an agricultural sciences education and communication alumna and Larry Hopkins’ daughter. They work together on the family farm and she maintains a small flock of sheep with her husband in Lebanon, Ind.

She said while it’s unlikely breeding sheep for wool will ever be most sheep farmers’ main source of income, she has witnessed an increase in demand for those looking to buy good quality, unprocessed wool. Fiber arts are increasing in popularity around the country and in Indiana. While her family farm was one of the first to corner the hand spinner market for high-quality wool, she said it’s possible more sheep farmers will begin introducing specialty breeds for this purpose.

“Artisans are looking for several qualities in their fleeces, including luster, amount of fleece, crimp and fineness,” Hopkins-O’Brien explained.

Hopkins and Neary say they are observing another trend on the supply side of the wool industry: farmers transitioning to hair sheep.

“The biggest growth in the industry has been in hair sheep, which, as the name implies, means the sheep have hair instead of wool,” Neary added.

Hair sheep are easily maintained because they do not require shearing and can be kept on small, uneven plots of land. Their popularity is growing throughout the country, Hopkins said.

“The hair sheep are a good trend, I think, because farmers are now able to use previously under-utilized land and they can save on management costs,” Hopkins added. “In terms of wool production, we have nothing to worry about domestically. Hand spinners and the like still have plenty of access to their chosen materials.”

Why ginger is at the root of holiday traditions

For Mark Russell working with animals is all about the people

How the hybrid teaching model is succeeding