lint Chapple’s furnace was on the fritz. He was driving back to campus in a rainstorm after meeting the repairman, and he ignored his ringing phone. “I don’t know anyone in Los Angeles, so I figured it was spam and I didn’t answer the call.” he says.

Fortunately, the persistent individual calling to notify Chapple that he had been elected to the prestigious National Academy of Sciences (NAS) called several of his Purdue colleagues, who relayed the urgency of the call. 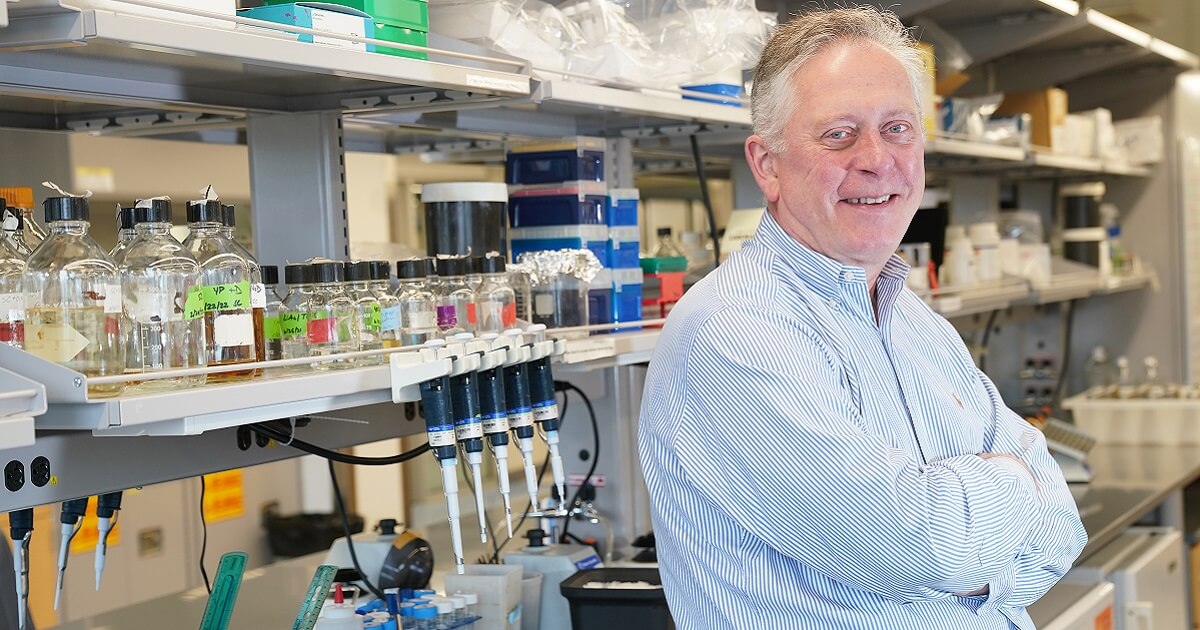 And that’s how Chapple, distinguished professor in the Purdue University Department of Biochemistry, initially missed learning that he had received one of the highest honors in science and technology.

“Election into the NAS is an outstanding honor for scientists,” said Karen Plaut, Glenn W. Sample Dean, College of Agriculture. “Clint is most deserving —a top-notch scholar who has received awards for research, teaching and mentoring students. We are elated he has been recognized for his contributions to his field, and we are proud to have him as part of our faculty.”

The NAS specifically cited Chapple’s work in understanding the biosynthesis of lignin, the hardening component in plant cell walls that serves various important biological functions. He has worked with this polymer since joining Purdue’s biochemistry faculty in 1993, and his research has evolved with knowledge of its applicability.

“In the old days, our work was based on pulp and paper production and animal feedstocks,” Chapple explains. “If you’re running a pulp mill, you’re trying to rid lignin from the wood. If you’re feeding cows, the lignin in the plant material limits access to the polysaccharides in the plant cell wall. As a result, rumen bacteria can’t get as much nutrition out of what you are feeding them.”

“More recently, the interest in biofuels has led to a lot of research on lignin. Again, you’d like to get the polysaccharides out of the cell wall to convert them into sugars and ferment them into fuels. The lignin itself also can be used to make fuels, and so there’s two sides to that area of interest.”

Along the way. Chapple’s lab found mutants of the model plant Arabidopsis that made different sorts of lignin. Unlike the regulated synthesis of other biological polymers, lignin is polymerized from available monomers, and scientists can change the availability of those building blocks. The result, Chapple explains, is different polymers with different chemistry and architecture.

“The plant cell wall is a fundamental part of a plant body, and sometimes when you modify lignin, the plants are very unhappy,” Chapple says. Such unhappiness would translate to significantly reduced yields, an important consideration when growing crops for biofuel. In another manipulation, Chapple’s lab changed a cross-linked polymer into a linear one, which has implications for processing.

“We learned a lot about how the cell wall was made and what plants could tolerate,” Chapple says. “We learned about the fundamentals of what genes and enzymes are important for plants to make lignin in the cell wall. We were able to manipulate their expression and learned to ‘reprogram’ the plant to make a lignin that might be more suitable for a variety of applications. Sometimes we made lignins that were worse, but learned a lot even then.”

“His research reflects the breadth and depth of our department,” says Andrew Mesecar, head of the Department of Biochemistry. “He has applied everything from classical metabolism studies to modern-day metabolomics and genetics — and he does it seamlessly.”

In addition to his groundbreaking research, Plaut notes that Chapple also has been instrumental in advancing plant sciences initiatives in the College of Agriculture. He co-founded and directed the Center for Plant Biology, which hired 10 new assistant professors to work across multiple disciplines within the center, funded as part of the Institute of Plant Sciences.

Investment in plant sciences through Purdue Moves and its successor, Purdue’s Next Moves, has helped sustain an environment in which Chapple’s research has flourished.

“Purdue has always been strong in plant sciences,” Chapple says. “That’s the reason I came here in 1993, in addition to the fact that the Department of Biochemistry was very strong. So it’s been great to see the recent investments that have brought Purdue plant sciences even more visibility.”

Chapple values his NAS election as affirmation from highly accomplished peers, but it caught him off guard. “How would I have ever imagined that I would be elected to the National Academy?” he asks.

His colleagues were less surprised.

“He was elected because of his forefront contributions to his field,” Mesecar says. “He is world renowned for that and for his service to the plant sciences community. This is what the world sees. What the world doesn’t see is an exceptional leader who is willing to sacrifice for the greater good of the department. He served as department head. He was chosen by his undergraduate students for the Book of Great Teachers and named Outstanding Graduate Mentor in the college. Clint is one of those rare unicorns who is a role model in all the categories — science, teaching, service and collegiality.”

He has especially enjoyed receiving congratulations from current and former students, whom he credits for their contributions to his research program: “I’ve had great people in my lab, many of whom are in industry or faculty members at other universities,” he says.

“If you can move the needle in terms of human knowledge — and get paid for it and have fun! — that’s a great opportunity. I’ve been very fortunate.”