Sorghum is a great crop for grazing, but livestock producers who use it always have some concern in the backs of their minds. Certain conditions, such as drought or freezing weather, can cause the plants to become deadly for grazing animals, and it’s not always clear when the forage is safe.

Those producers’ minds might soon be put at ease. Purdue University’s Mitch Tuinstra, a professor of plant breeding and genetics, has developed a sorghum that contains no dhurrin, a compound that combines with plant enzymes to create hydrogen cyanide, known more commonly in the livestock industry as prussic acid. Without dhurrin, the modified plants do not produce hydrogen cyanide, reducing the risk of cyanide poisoning in grazing animals no matter the weather. 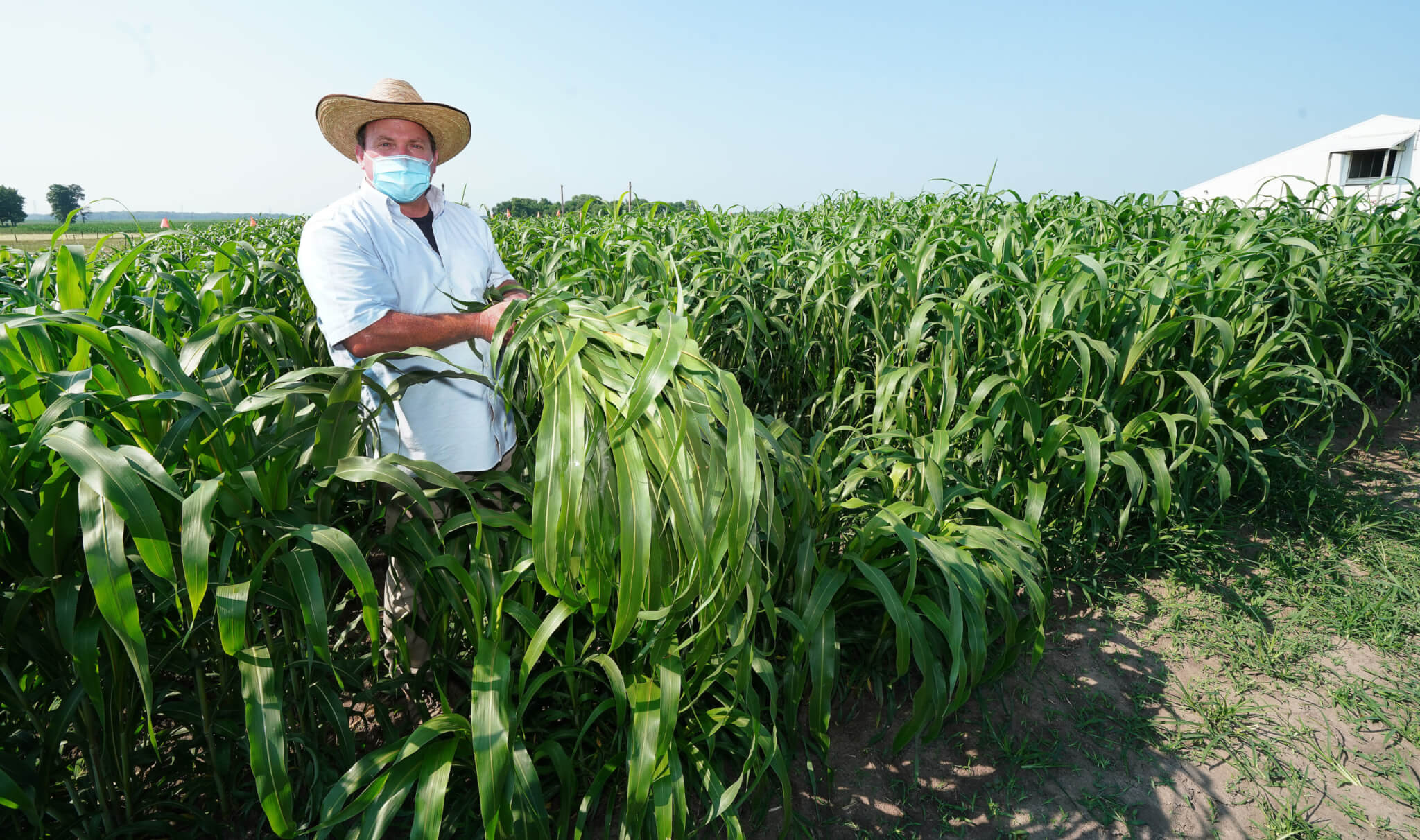 Mitch Tuinstra created 12,000 mutant lines of sorghum to identify one that does not contain dhurrin, a metabolite that creates deadly prussic acid in the plants. (Purdue Agricultural Communication photo/Tom Campbell)

“Sorghum is a great option for forage, but farmers have always had to be really careful about it,” said Tuinstra, Purdue’s Wickersham Chair of Excellence in Agricultural Research and scientific director of the Institute of Plant Sciences. “Removing the dhurrin from the plants takes away that worry. Animals aren’t going to suffer if they eat it at the wrong time. And it’s possible that livestock producers in more areas will be willing to use sorghum as a forage, which would be helpful as the climate changes since sorghum is more heat- and drought-tolerant than some other plants.”

Livestock producers who use sorghum and sorghum-sudangrasses as forage for their animals are acutely aware of the coming of the fall or winter’s first freeze. At that point, many of them abandon the forage and turn to other feed options.

That’s because of dhurrin, whose role in plants is unclear but may provide defense against insects. As temperatures become cooler, this secondary metabolite is thought to accumulate in sorghum leaves and stems, which increases the risk for livestock.

Producers want to get as much out of their forage as possible, since once the forage sorghum is thought to be unsafe, they have to spend money on other feed for their animals. It’s thought that two weeks after a freeze, the sorghum is safe again. However, many producers won’t risk and don't have the time to bring their animals back to the pasture.

Complicating the issue is that it isn’t always clear when livestock should be pulled from a pasture. A light freeze may or may not induce dhurrin accumulation, and the uncertainty can cause producers to abandon the forage and start unnecessarily paying for other feed.

Heat and drought conditions can also lead to dhurrin accumulation, and those are even more difficult to gauge.

“Producers have to play a bit of a guessing game, and many aren’t comfortable doing that. We advise them to plant other forage options, but those aren’t always as productive as sorghum,” said Keith Johnson, a Purdue professor of agronomy and a forage specialist. “Without dhurrin, we can continue to graze much later into the year and not have to worry about it at all. It gets rid of the hassle and fear factor.”

I THOUGHT THEY WERE JOKING

Tuinstra, whose work involves harnessing genetic resources for crop improvement, thought it could be possible to modify sorghum’s DNA to disrupt the biochemical pathway that leads to dhurrin production. He treated sorghum seeds with ethyl methanesulfonate, a compound that produces random mutations to DNA.

The process yielded 12,000 different mutant sorghum lines. Graduate and undergraduate students screened more than 50,000 plants from this population to identify genotypes that do not produce dhurrin. Genomic sequencing identified the gene that was altered and allowed Tuinstra to create experimental hybrids that could be field tested. 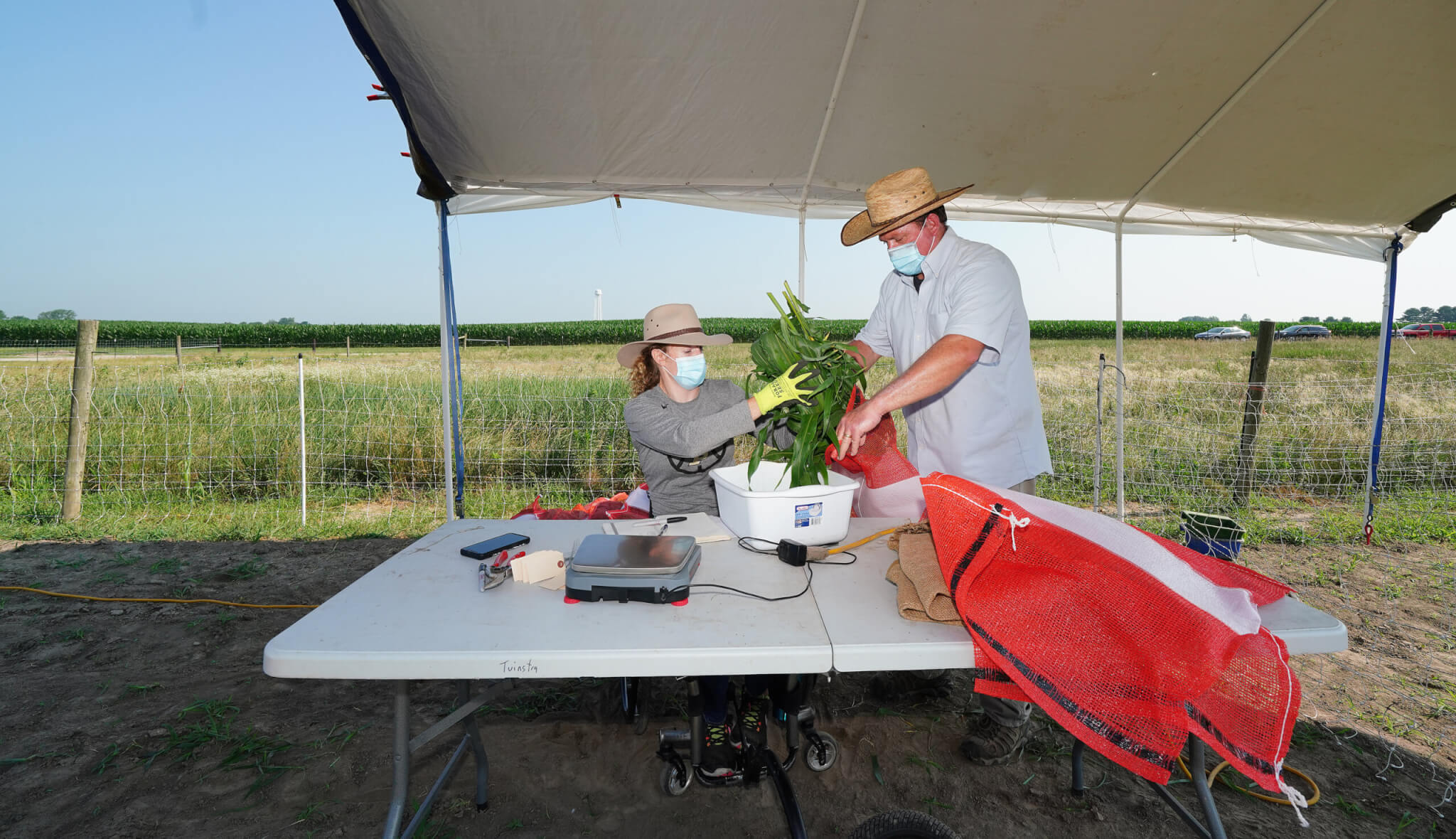 Shelby Gruss, a doctoral candidate in Tuinstra’s lab, planted a replicated experiment that had plots of the dhurrin-free sorghum among plots of three sorghum hybrids that naturally contained dhurrin. When those plants were mature enough, she set sheep loose to graze and used trail cameras and drones to monitor the animals’ feeding habits.

“You could just see that the plants where they were eating the most were the experimental dhurrin-free hybrid. The others had been touched, but there wasn’t much missing. After two or three days, there was almost nothing left in the dhurrin-free hybrid,” Gruss said. “It was kind of surprising at first. I wanted to see if it happened again, so we ran the experiments again. It kept happening. The animals really do prefer it.”

No one was more surprised than Tuinstra, who was traveling in India when Gruss and other graduate students started sending him photos.

“I remember seeing those photos and thinking the preliminary results were too good to be true,” Tuinstra said. “I thought they were joking. When I got home, I ran straight out to the farm to see for myself. I couldn’t believe it.”

Whether it’s plants, animals or other organisms, a single gene may be responsible for multiple traits. So when the gene that affects dhurrin production was altered, the big question was what else might change in the sorghum plants.

Once again, Gruss set to work, this time to identify which, if any, agronomically important traits like yield, insect defense and drought tolerance might be altered.

While all the results aren’t complete, preliminary work shows that dhurrin-free sorghum yields as well as conventional hybrids and at times produces slightly more biomass. The conventional plants are slightly more insect-resistant, but not by much.

BRINGING THE TECHNOLOGY TO FARMERS

Tuinstra patented the dhurrin-free trait and turned to Ag Alumni Seed, Indiana’s foundation seed company and a non-profit Purdue affiliate, when it came time to commercialize his sorghum technology. The company today develops and markets high-performance popcorn hybrids, but it has a long history of being a pipeline for getting Purdue’s value-added crop traits to market. 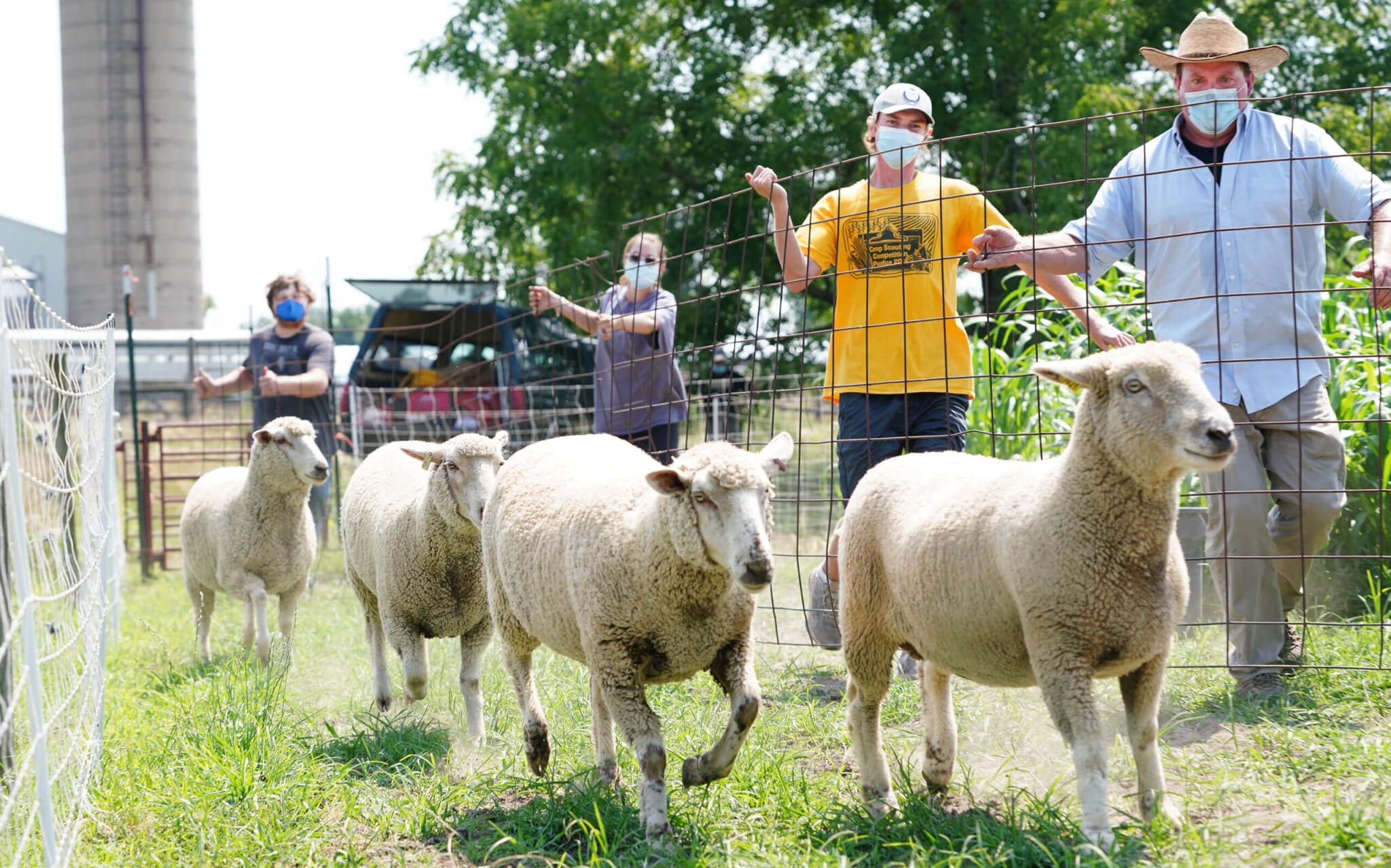 Jay Hulbert, Ag Alumni Seed president and CEO, said the company provided some funding to further Tuinstra’s research and field trials and connected him with S&W Seed Company, which breeds and sells hybrid sorghum seeds globally. S&W Seed eventually licensed the technology and plans to bring it to market in the U.S. and Australia initially.

“This was really a throwback to the role we used to play. This is going back to our roots,” Hulbert said. “S&W is focused on bringing value-added traits to farmers, and this is a good fit. We were able to help expedite this and keep information flowing between Purdue and S&W.”

Scott Staggenborg, sorghum product marketing director for S&W Seed, said dhurrin-free sorghum takes a stress off growers who have to worry about their animals at an already busy time of the year.

“In the U.S., most times that first freeze is in the fall when you’re in the middle of corn or soybean harvest. You have to take the time to pull livestock off the field,” Staggenborg said. “We think this makes the hay you want stress-free and saves producers time and money.”

S&W is continuing field trials with the dhurrin-free sorghum and envisions adding other traits to improve its appeal. These new hybrids could be reaching fields within a few years.

“It’s gratifying for a breeder to see a project like this work out so well. This is good for the animals and the growers,” Tuinstra said. “It’s not often that you can do that and have little or no negative effects on the rest of the plant. I’m proud of all the work our team has put into this.”