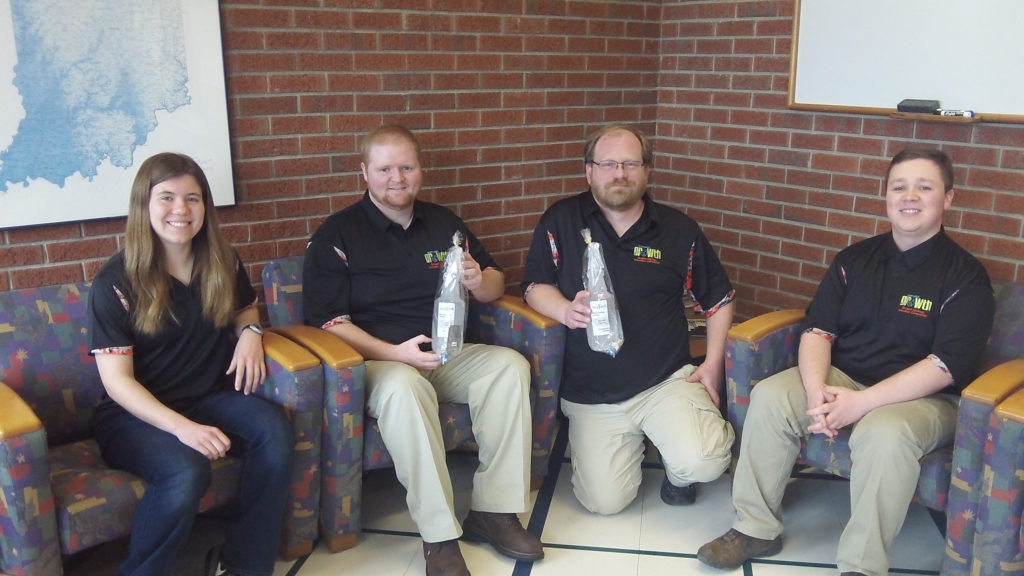 A chat with farmers over a cup of coffee in a small Indiana town led to an invention that earned a team of four students first place in the 2018 Student Soybean Innovation Competition. Team SoyTack won $20,000 for its soy-based tackifier, a fast-curing, formaldehyde-free soil stabilizer. The Indiana Soybean Alliance has funded the competition since 1994.

Junior roommates Jacob Semonis, agricultural economics and agronomy, and Christopher Stichter, agricultural systems management, went to the competition callout looking for technical expertise to balance their own strengths. They found it in Terence Babb, a senior in multidisciplinary engineering, and Susan Hubbard, a junior in biological engineering. Babb and Hubbard also had participated the previous year, so they understood how critical time management would be.

“You think there’s so much time; the deadline is months away,” Babb says. “Then you don’t have any time at all.”

That’s because three components — a written report, working prototype and 10-minute presentation — comprise each team’s score, explains Michelle Creech, program manager for the competition. At least two members of each team must be undergraduates, but Creech and others also encourage graduate students to participate. Their additional years of experience, she says, “add a lot of value to student teams.”

Team SoyTack was on it, but a great idea eluded them. It had to be ambitious but doable, tap available resources and have a solid potential market. The team generated as many as 30 potential projects, and rejected them all.

Then Semonis, who grew up on a family farm in Atwood, Indiana, went home and had coffee with some farmer friends who suggested a need for erosion control. He brought the idea back, and the team spent hours brainstorming — and arguing — until they landed on hydroseeding, a process that applies a mixture of mulch, seed, adhesive and water to where the seed is meant to grow. “It was like a lightbulb went off,” Semonis says. SoyTack, the team’s soy-based adhesive for hydroseeding applications, was born.

“Then everybody kind of fell into their role,” Babb says. He took the lead in the lab, while Stichter focused on greenhouse germination and erosion testing. Hubbard and Semonis handled business analysis and reporting. Team members say their different majors strengthened the whole.

Such academic diversity is an advantage, agrees Nate Mosier, Indiana Soybean Alliance Soybean Utilization Endowed Chair and the competition’s faculty advisor. “We make an effort to recruit as widely and broadly as possible so different disciplines are represented. It fosters interaction across disciplines that is not as common as we would like it to be.”

“The main takeaways from this competition are teamwork and communication,” Stichter says. “Our schedules did not line up at all, and it was hard to get all of us to meet up at the same time. Communication through other channels was key.”

Veteran faculty advisors like Michael Ladisch, distinguished professor of agricultural & biological engineering, and Natalie Carroll, professor of Extension education, don’t expect all teams to succeed, as enthusiasm gives way to busy schedules. Of the 33 teams that formed this year, 18 presented at an elimination round in January, and 11 at the official judging in March.

Learning to apply classroom knowledge to a complex project “is early exposure to what students will have to do as professionals,” Ladisch says. He also points out that the competition shows participants majoring in subjects outside of agriculture career possibilities in the field.

It’s a three-way win — “for the students’ growth; for the soy industry, because it’s getting new ideas; and for faculty, because we’re involved with students differently,” Carroll says. “In a way it’s flipped, because the students are in charge, and we’re a resource.”

Success in the competition can lead students to the summer ASPIRE internship and ongoing work on their soy-based products. They conduct research; learn about technical communication, marketing, customer delivery and entrepreneurship; and move their prototype toward commercialization. “There are ways to improve the product that we haven’t thought of yet,” says Hubbard, who is one of four competitors who applied for the internship this year.

“I can tell you right now, we plan on moving forward,” Semonis says. “When you get a team together and they have the same goals and they’re willing to work 110 percent, it’s interesting to see what can happen.”

See a list of the 2018 winning teams and their faculty advisors here.