College of Agriculture Fraternities and Sorority Lead the Way 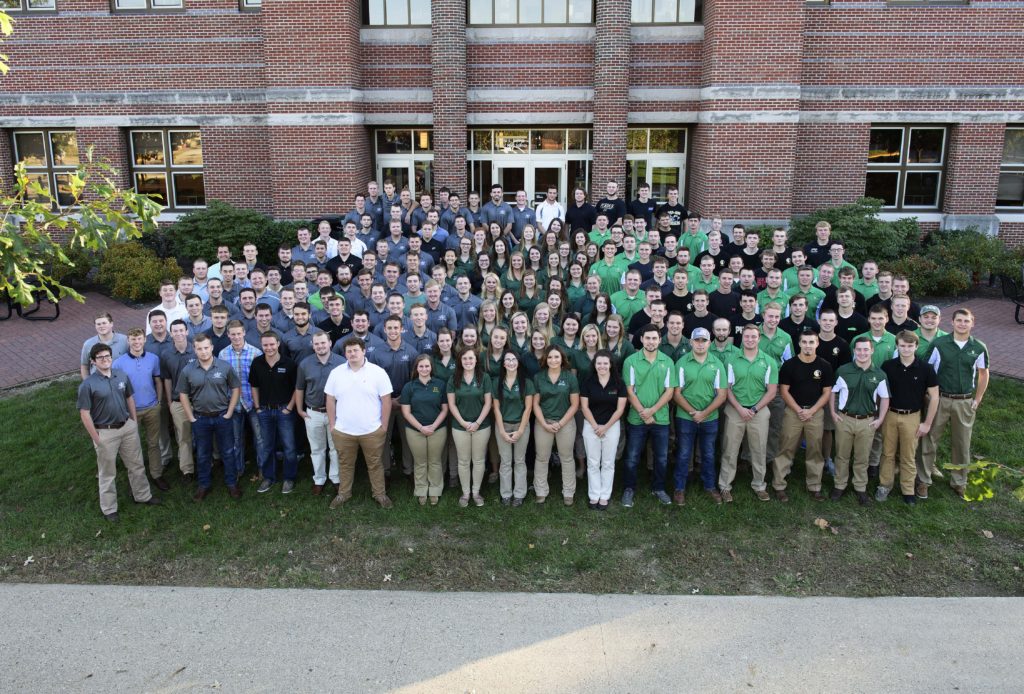 Purdue University’s College of Agriculture stands out — not only with its educational programs but with the students it attracts and the ways in which those students give back. They emerge as the future leaders in the world of agriculture and beyond.

Outside of the classroom, one of the areas in which agriculture students grow is in the field of Greek life. Purdue has three agricultural Greek life chapters — the Sigma Alpha sorority and the Alpha Gamma Rho (AGR) and FarmHouse fraternities.

FarmHouse and AGR help their members rise through the ranks of Purdue and the professional world. This past year the fraternities also excelled among campus fraternities and sororities in regard to their grade point averages — with FarmHouse ranking fourth highest, and AGR ranking fifteenth.

FarmHouse has been a contender for the top fraternity on campus for five consecutive years.

“The members of agricultural Greek life push themselves to grow — not just in terms of increasing their GPA, but in terms of improving on a personal level and emerging as outstanding young men,” says Dr. Michael Gunderson, FarmHouse’s chapter advisor and an associate professor for Purdue’s department of agricultural economics.

The success of the members stems from the brotherly bond they share. “These guys lift each other up and inspire one another,” says AGR chapter advisor Nathan Manges.

The brothers of AGR and FarmHouse are predominantly cut from the same cloth, coming from rural upbringings and single-family farms.

“For those in the College of Agriculture like myself, we came from small, rural Indiana towns and weren’t exactly ready for Purdue with its sprawling campus of $40,000+ students,” Manges says. “It’s easier to feel like you’re at home when you live with others who came from similar farm backgrounds. Many of these guys went to 4-H fairs and showed cattle together when they were kids. And a lot of them were members of the Future Farmers of America (FFA) when they were growing up. They want each other’s dreams and aspirations to turn into realities.”

Members of both fraternities help each other sharpen their professional and academic edge through “membership development events” within the houses, such as resume writing workshops, mock interviews, financial management lessons and weekly study sessions. They also provide professional development opportunities, including regional career seminars for undergraduates, internships through alumni contacts, job networking and alumni associations with post-graduate agricultural programming and more.

Taking advantage of these opportunities paid off for AGR chapter president Zane Gottschalk, leading him to an internship with Caterpillar Inc. — one of the world’s largest construction and agricultural equipment manufacturers.

“My brothers pushed me to be the best I could be,” Gottschalk says. “I wouldn’t be where I am today without their support. My experiences in AGR made me feel prepared to work with the Caterpillar team.”

Before they became advisors, Gunderson and Manges both pledged in fraternities, and like Gottschalk, they give credit to Greek life for helping them develop personally and professionally.

“Spending time with peers from similar backgrounds is incredibly helpful,” Gunderson says. “That built-in support system is a great force of motivation and encouragement.”

Sigma Alpha was founded in 1978 at Ohio State University by a group of five women searching for an alternative to strictly social Greek organizations. The Purdue chapter of Sigma Alpha was established in 1984.

Unlike other Greek life chapters, Sigma Alpha doesn’t have a house. But the sisters of this sorority are a tight-knit group united by their educational interests.

“My split-second decision to go for Greek life freshman year has provided me with amazing opportunities and friendships,” says chapter president Bailey Goff.

In addition to weekly gatherings and study sessions, the chapter holds a formal meeting each month that features guest lecturers — usually female leaders in agriculture. The sisters invite members of Purdue Extension as well as professors and agricultural professionals to speak about a wide variety of topics ranging from challenges in the field of agriculture to methods of balancing work and family.

The Sigma Alpha sisters do their own fair share of speaking in the community. As part of their national service project, Agriculture in the Classroom, they visit local elementary schools and talk to students about the role of agriculture in the economy and society at large.

“By providing sisters with these opportunities to serve, Sigma Alpha has excelled in preparing members for life in the agriculture field and giving us real-world experience,” Goff says.

Sigma Alpha’s chapter advisor Mary Helen Halsema agrees, saying that “the chapter allows its members to flourish as young professionals and gain confidence when it comes to carving out their career paths and entering the working world.”

Together, these three Greek life chapters enhance the College of Agriculture experience for Purdue students. They help members thrive, giving their brothers and sisters the strength and skills to blossom wherever life plants them. “Going Greek” isn’t just about achieving academic or professional success — it ultimately promotes personal growth.