“For the most part honey bees rely on humans to survive. We have been breeding them for many hundreds of years to express the traits we want, like honey production, resistance to disease and gentleness.”

Small farmers across the U.S. use high tunnels to extend their growing season, something known to present different pest problems compared to open field production. However, as community farms grow to fill in for urban and rural food deserts, researche…

The Purdue Landscape Report team has received the Purdue Agriculture 2021 TEAM Award. An acronym for Together Everyone Achieves More, the college created the award in 1995 to recognize interdisciplinary team achievements of faculty and staff.

Small farmers across the U.S. use high tunnels to extend their growing season, something known to present different pest problems compared to open field production. However, as community farms grow to fill in for urban and rural food deserts, researchers see a gap in an understanding of how pest pressures vary depending on if the high tunnels are located in the city or country.

As travel around the country slowly returns to pre-pandemic levels, experts warn of the possibility of
bringing home uninvited guests. They may not ask to crash on your couch, but invasive insects such as
the spotted lanternfly could prove to be a real nuisance if they arrive home with you.

Behind the Research: Krispn Given

When Krispn Given mentions he’s a honey bee researcher, the first question people ask him is whether he gets stung a lot. He doesn’t.

The bees are defensive sometimes but not aggressive, says Given, who is key to the entomology department’s beekeeping and pollinator protection programs. He is widely recognized for his innovative work in honey bee instrumental insemination and honey bee breeding. 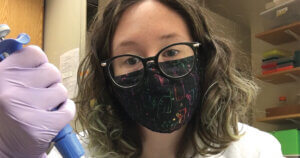 By Kayla Sweatland DNA extractions and polymerase chain reactions (PCRs) are just a couple things that Mia Brann, a junior majoring in plant sciences from… 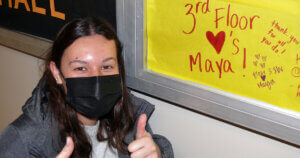 Sophomore strives to provide some kind of normal

By Corynn Christjansen As a freshman, Maya Fulton enjoyed spending her free time with the students on her residence hall floor and attending dorm-sponsored events.…

Many farmers rent bee hives to pollinate crops, but they could tap into the free labor of wild bees by adopting an as-needed approach to pesticides, a new proof-of-concept study shows.

A multiyear study of commercial-scale fields in the Midwest found this approach led to a 95% reduction in pesticide applications, while maintaining or increasing crop yield for corn and watermelon. The findings are detailed in a paper published in the Proceedings of the National Academy of Sciences.

“I love working with bees because, I think, they are the most important insects in the world. We need to promote them and find ways to take care of the existing populations,” Liced Giraldo Moreno said.

“A major reason this project worked is because so many farmers around the state are comfortable working with Purdue Agriculture,” Ian Kaplan, professor of entomology, said. “We owe that trust to the networks and relationships Extension fosters among farmers in Indiana.”

How do you make access to scientific knowledge more democratic for people around the world?
How can we be inclusive of diverse groups in the creation of that knowledge?
And, finally, how can we equitably transfer that information to those who speak different languages, may not read or write or live in hard-to-reach areas of the world?
These questions have guided the organization Scientific Animations Without Borders (SAWBO) since its founding in 2011. Co-founded by newly hired agricultural sciences education and communication assistant professor Julia Bello-Bravo and Barry Pittendrigh, Purdue’s Osmun Endowed Chair of Urban Entomology and director of the Center for Urban and Industrial Pest Management, SAWBO has created a research and highly scalable outreach program that uses the power of animation to disseminate scientific knowledge around the world.

For many years, scientists have been extracting DNA from the bones of ancient humans, humanoids and animals to paint a picture of evolution and species movement. Despite what’s been portrayed in the movie “Jurassic Park” — in which dinosaurs are resurr…

From “eww” to “cool”: Why you should welcome slugs, bats and wasps

“Many insects, arthropods, invertebrates and mammals pollinate,” Harpur said. “Bats are probably the best-known mammalian examples, but wasps, flies, beetles and slugs also pollinate. It works very similar to how bees pollinate-the animal is attracted to the flower in some way and pollen is transferred on to its body and then, eventually, to another plant. One of my favorite examples is the mirror orchid. Its flower looks and smells like a female wasp. It is so convincing that male wasps will try to mate with it and, in so doing, they transfer pollen between flowers.”

To reach global audiences, think smaller — screens, that is

Scientists around the world develop new technologies and information that can improve the lives of people in developing countries. Getting that knowledge into their hands, however, often proves difficult.

17 Ways to make the most of 17-Year Cicada Emergence

“If you like insects, or are even just curious about them, you have a unique opportunity coming up. Get out and enjoy it while you can,” recommended Elizabeth Barnes, an exotic forest pest educator for Purdue Extension Entomology.

The 17-year cicadas of Brood X were last seen in 2004. This spring, they are set to appear across Indiana and in parts of 14 other states.

“Even though some days I’m getting out of bed to reach the field before the flowers open, it’s easy for me to find the endpoint of who we’re doing this for,” said Jacob Pecenka, a Ph.D. student in entomology. “Watermelon growers in Indiana.”

Bed bugs tuck themselves away into dark, unseen spaces and multiply rapidly, making them difficult to control. That job has gotten even harder in recent years as the pests have developed resistance to the insecticides long used to eradicate them from h…