The scale up of the Purdue Improved Crop Storage (PICS) technology started in 2007 to help farmers in developing counties counter threats to post-harvest loss. Since its inception, PICS bags have been distributed in 68,000 communities in Sub-Saharan Africa and Asia to store harvested crops, like cowpeas, maize, wheat and rice. This simple innovation allows farmers to store their grain safely for extended periods without the use of pesticides and to improve household food security as well as income through access to better market prices.

Recently, PICS made forays into Central and South America, mainly Peru. “Before the project can identify experts to train farmers in the technology or establish a supply chain, it is imperative the team understands the dynamics of the country’s farming communities,”  Dieudonné Baributsa, principle investigator of the Capacity Strengthening for Postharvest Handling and Storage (CAST-PH) in Arequipa, Peru and associate professor of entomology, said.

The CAST-PH is funded under the Arequipa Nexus Institute for Food, Water, Energy, and the Environment (Nexus Institute), an alliance between Purdue University’s Center for the Environment and Universidad Nacional de San Agustín de Arequipa, Peru (UNSA). Baributsa and others on the CAST-PH team recently completed a study that sheds light on specific challenges farmers face in Arequipa, an essential grain-producing region of Peru. The results were published in the journal PLOS ONE. 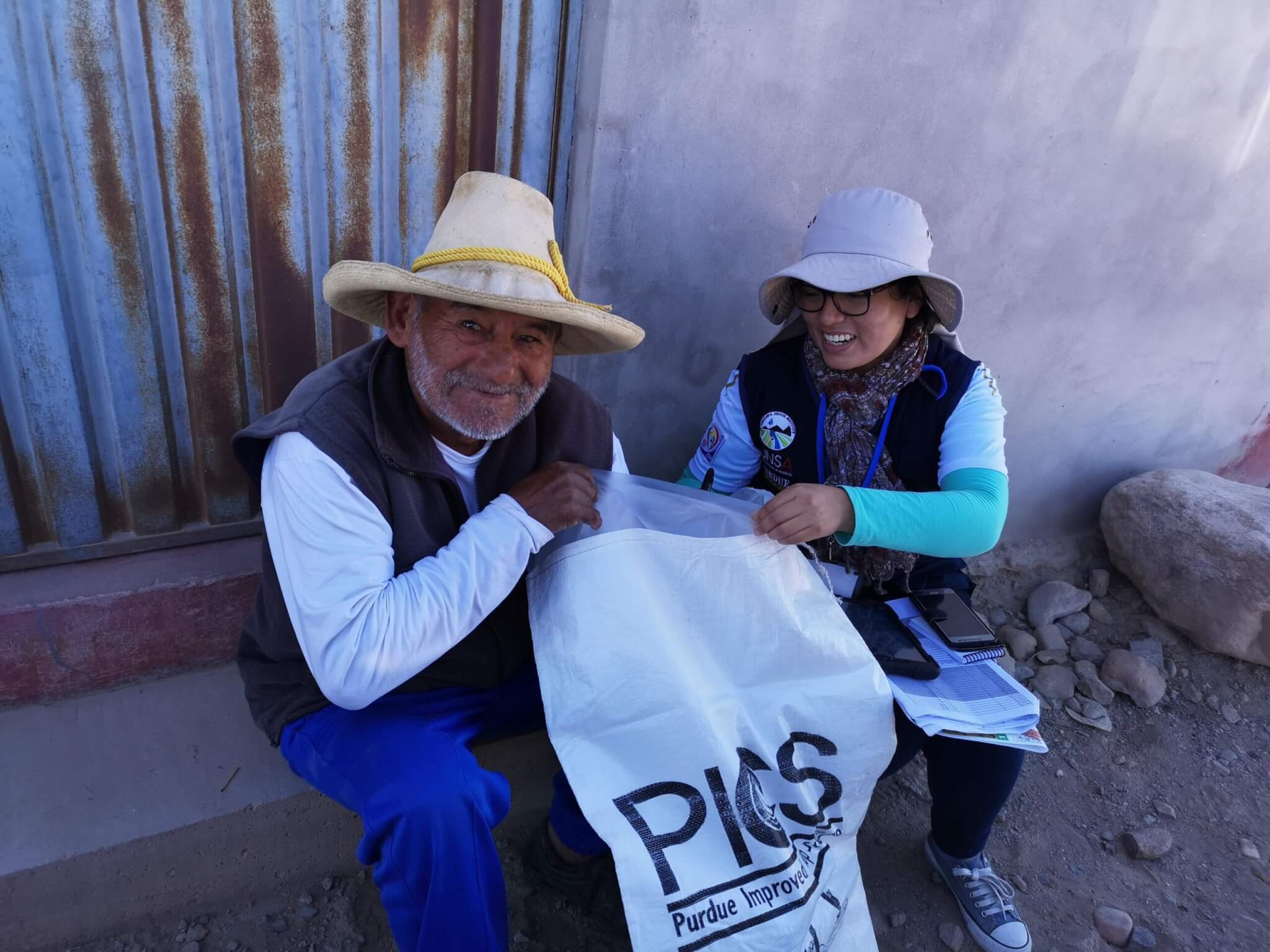 “These types of studies are important because they help identify issues faced by smallholder farmers in preserving grain quality after harvest,” Charlie Woloshuk, Purdue professor of botany and plant pathology, said. “They provide basic information related to challenges during grain handling and storage; and help identify whether there is potential interest in and demand for the PICS and other postharvest technologies.”

Baributsa, Woloshuk and other collaborators surveyed 503 farmers in the lowlands and Andean region of Arequipa. They found that rice, common bean and quinoa are most commonly grown in the lowlands while starchy maize and native quinoa ecotypes are the principal crops in the Andean zone.

“Ninety percent of the surveyed farmers dry crops in their fields, directly on the ground and about 77 percent of those farmers cited insects as a significant and common challenge during post-harvest storage” said Jorge Díaz-Valderrama, a postdoctoral researcher in entomology at Purdue who led the study. Out of all those surveyed, only 44 percent said they use preventative measures to combat pests.

Farmers who store grain longer for household use or sale reported that they experience crop loss due to insects.  “We tend to see more insect pests during storage in low-altitude farms because temperatures are higher,” according to Sonia Jackeline Zanabria, a principle investigator of the CAST-PH project and professor in the department of food industries engineering at UNSA in Arequipa, Peru. “More insects result in more potential grain damage in the lowlands compared to the high altitude region of the Andes.  Therefore, we will need to adapt training and use of the PICS technology on a community-by-community basis,” Zanabria, said.

“Grain storage by smallholder farmers in Peru is no different than what we have seen in other countries in Africa or Asia,” Baributsa, continued.  “Insects, rodents, and molds are major challenges during field drying and storage.” He explained that this study lays the foundation for a future intervention to scale-up postharvest technologies in Arequipa and other regions in Peru.Future efforts will continue to build the capacity of extension agents and farmers, which will reduce postharvest losses in the region.

In recognition of its extraordinary community engagement initiatives, the Association of Public and Land-grant Universities (APLU) has named Purdue University and Purdue Improved Crop Storage (PICS) an exemplary designee.

PICS: How a technology scaled up to reach millions

Why do we turn on our radios? For music, entertainment and maybe for news, if we’re feeling virtuous. Hardly anyone in the United States would say they turn on their radios for the advertisements. But if you’re a farmer in Eastern or Western Africa, a radio advertisement could be the difference between your family eating…