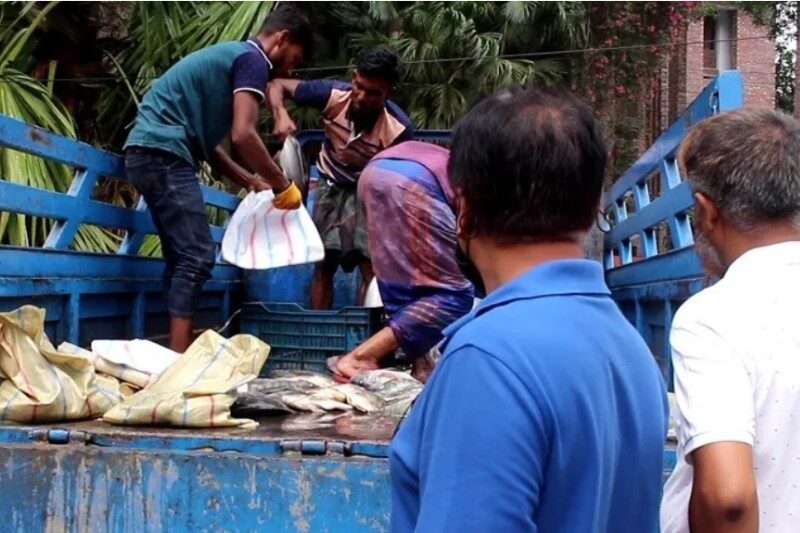 Translated from a story published by SHOBUJ BANGLADESH.

An auction was organized in the offices of the Agriculture, Economics, and Rural Sociology faculty of the Bangladesh Agricultural University to assess the value of food safety in fish and chicken in Bangladesh. The auction was organized by the Bangladesh Agricultural University, Dhaka University, and Texas State University together with financing from USAID. The research team organized this auction as a strategy to determine the market price of fish and chicken that are produced safely through this project.

Researchers stated that safely cultivated fish are attracting buyers and it looks like farmers will be able to sell fish that they produce at their desired price. At the beginning of the event, Dr. Madan Dey joined virtually from the United States. He said, “the purpose of this project is to raise fish and chicken while properly maintaining food safety and quality.” After this, project director Dr. Md. Saidur Rahman highlighted the agenda and the rules of the auction for the buyers present. He said, “fish cultivated under the project along with fish bought directly from the market are available here.”

He asked buyers to determine the price of the cultivated fish according to the market price. After that, two samples each of Tilapia and Pangas fish were shown to the buyers. Out of these two one was bought from the market and the other one was specially cultivated fish. At the first stage of the auction, the buyers were asked to determine the price of a fish that looked good based on its size and color. During this time buyers observed the fish in detail and submitted their maximum price in sealed envelopes.

In the second stage, buyers were asked to determine the price of specially cultivated fish based on information from the laboratory regarding the quality of the fish. During this time, Dr. K. H. M. Nazmul Hussein Nazir of the Department of Microbiology and Hygiene of the Bangladesh Agricultural University highlighted information from the laboratory for the buyers present and answered their various questions. Research shows that there are less bacteria present in safely cultivated fish. Sometimes there may even be no bacteria at all. There seem to be more bacteria present in unsafely cultivated fish.

After this, the results of the action were announced. The person who offered the highest price in the action was declared the winner. To purchase the fish, that person was asked to pay the second-highest price for it.

Teachers, office employees, and neighborhood businessmen including nearly 50 general buyers were present at the auction. Dr. Md. Akhtaruzzaman, a member of the research team, Dr. Samina Luthfa, an associate of the Faculty of Sociology of Dhaka University, and nearly 50 buyers were present. In stage one Dr. Md. Abul Haem from group “A” became the winner by offering 250 taka for specially cultivated Tilapia and 200 taka for Pangas fish. He had to pay the second-highest price of 200 taka for Tilapia and 150 taka for Pangas fish.

Dr. Md. Saidur Rahman, the principal co-coordinator of the project said that this project is being financed by the Feed the Future Food Safety Innovation lab. Through this project, producers are gaining an interest in cultivating fish free of bacteria and other hazards. The researchers also said that this will ensure health and safety through the use of safe fish.