Most days, Austin Dixon can be found in the dimly lit basement of the Biochemistry Building, surrounded by expensive, high-tech equipment studying proteins for his undergraduate research project.

On other days, he can be found in a bright classroom, demonstrating how to make a rudimentary lava lamp out of Alka-Seltzer tablets to a group of loud elementary school students. In both environments, Dixon thrives because he shares his love of science with the world.

“Science gives me the tools and understanding to answer questions about the world we live in,” said Dixon, a senior in biochemistry from Greenwood, Indiana. “It provides a platform of discovery to move the world forward.” 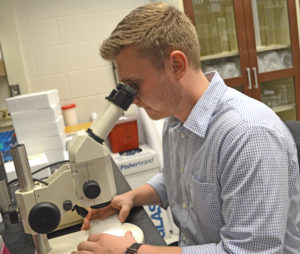 Photo by Mikaela Wieland
Austin Dixon works in the laboratory on an uncharacterized class of proteins. His love for science influences everything from his undergraduate research to his volunteer work with middle schoolers.

It isn’t enough that he pursues his research goals on his own. Dixon said the next generation must be inspired to discover great things as well. He teaches in classrooms and judges science fairs. Both volunteer efforts are aimed to engage kids and spark their interest in science.

“Often, science is something most kids see as dull or uninteresting,” Dixon said. “Doing this has allowed me to positively influence younger kids and change their perspective on science.”

One of the experiments aimed to pique the middle schoolers’ interest is the Alka-Seltzer lava lamp.

“It’s a great way to teach them how something they already know about really works,” he said.

The kids mix vegetable oil and water with food coloring and an Alka-Seltzer tablet. The experiment demonstrates simple concepts like density and polarity. The tablets produce carbon dioxide bubbles that are less dense than oil and rise to the top of the lamp.

The Purdue Biochemistry Club isn’t Dixon’s only outreach. He judges K-12 science projects at the Indiana Regional Science Fair Competition in West Lafayette and volunteers at the annual Celebrate Science Indiana in Indianapolis. At these events, he interacts with and teaches science to more than 1,000 kids.

“I’m able to interact with hundreds of young, budding scientists and discuss their projects with them,” Dixon said.

Dixon’s outreach mission is to cultivate the next generation of scientists.

“These programs are necessary to get children interested in science beyond the textbook, and open their mind to the possibility of pursuing the field in the future,” he said.

Dixon knows that the kids aren’t the only ones benefitting from the experience.

“It’s rewarding to me personally because I’m able to make an impact in my community and within the lives of these children, which they will remember forever,” he said.

Positive memories and experiences associated with science are important, Dixon said, because he wants people to understand the benefit of scientific research and the scientific process. He also wants to erase the stigma associated with science. Dixon said that requires a dialogue with the public that needs to be more transparent and more people need to know how long and detailed of a process science is.

Part of that starts with the way he speaks about his own research. He said that he tries to make sure to explain that his work has a practical use.

“You have to talk about the why,” he said. “People care about what the impact of the science is.”