Junior tuned in to radio experiences

With his friends standing beside him, Jacob Klaybor stood back and took in the hillside covered with students who were enjoying the band playing on a warm spring night. More than 1,500 students enjoyed the annual Rock the Quad. And Klaybor was at the center of it all.

“I barely remember the concert,” said Klaybor, a junior natural resources and environmental sciences major from South Bend, Indiana. “I was just standing there in awe that we had a couple thousand students out there having a good time because of the hard work you and your team put in. You don’t always get those types of visual results.”

Klaybor is president of Cary Club Radio (called WCCR), which organized Rock the Quad, a free concert for students. WCCR is also one of three student-run campus radio stations. Student hosts independently program WCCR’s online platform. The hosts have an opportunity to create their own “brand” because they have freedom over their own shows to choose things from playlists to talking points. 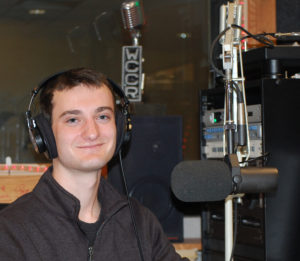 Photo by Cheyenne Hoffa
Jacob Klaybor is the president of Cary Club Radio (WCCR). In addition to creating radio shows, the group also puts on an annual Rock the Quad concert.

“The ability to create engaging dialogue is what turns a show from you talking at someone through a microphone to you inviting them into the conversation,” Klaybor said. “People are fun to listen to. When they broadcast their favorite songs or tell stories from around campus, they can create a shared experience with a listener who they may not even know.”

Klaybor said WCCR is a great way to help advance journalism and communication student’s future careers, but it is also a fun hobby that anyone can enjoy. Since the club is filled with students from all majors, Klaybor met and collaborated with students and organizations from all over campus. Klaybor is involved in environmental groups on campus, but in taking a step outside of his field he has been able to learn how to be an outsider.

“It is important to always optimize your resources, especially when you are doing something unfamiliar,” said Klaybor. “When you need help you should always go and seek it out.”

All that effort doesn’t mean no fun. Klaybor said he enjoys looking through WCCR’s extensive record collection and listening to other programs. Klaybor said the fun memories and awesome results of their efforts were worth the late nights.

“Driving around at 3 a.m. searching for an open Taco Bell for the opener for Rock the Quad last year after picking them up airport with my friends is a memory I’ll never forget,” Klaybor said. “The next day it was all worth it, because the concert went so well.”

During Klaybor’s freshman year his friends talked him into joined radio club in Wiley Hall. He has been hooked ever since. Though he currently isn’t producing a show, he hopes to once his term as president is over.

“I would definitely want to bring back the show that I had with my friend during my freshman year,” Klaybor said. “We had a small show on Friday nights where we would play music, discuss news, and share stories about the interesting or exciting things that had happened during the week.”

Klaybor said one of the best parts of being at WCCR is the chance to carry on a tradition that has been a part of campus since 1952. Hearing from WCCR alumni has motivated Klaybor and the rest of the members.

“So much has changed since it started,” Klaybor said. “We have a room full of records in the back that are unused, because now we just use an aux cord. One thing that hasn’t changed is that people still enjoy listening to the radio.”

He embraces the weeks leading up to the next Rock the Quad event. In his second go around they have learned from their mistakes in previous years and won’t be out until 3 a.m. the night before the show.