Love for animals takes her halfway around the world 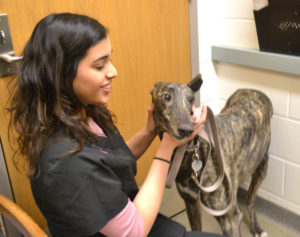 Photo by Katlynn-Ann Douglass
Aishwarya “Ash” Chitnis loves caring for animals so much, it brought her all the way to Purdue from Mumbai, India. She found others who care for animals as part of the Purdue Animal Science Ambassador program.

Aishwarya “Ash” Chitnis finds herself assisting veterinary clinicians and assistants during procedures of the animals that often walk in and out of the veterinary clinic. She also examines the animals by looking into their mouths and ears, and ensuring they are ready for surgery. It’s clear by watching her that she cares as much about these beloved pets as if they were her own.

“My passion for animals reaches beyond healing them,” said the junior animal sciences: pre-veterinary medicine major. “I also make sure they are properly taken care of.”

That passion for animal well-being took her halfway around the world — from her home in Mumbai, India, to Purdue — and it drives everything she does. But her journey began when she was very young and her first pet, a 3-month-old dog, died.

“I didn’t know if my dog died so young from negligence from the vet that was treating it or the unavailability of the medicine needed to treat the dog,” Chitnis said.

She didn’t just mourn for her dog’s death. She took it as a call to action. She saw a need for better animal care and felt she could make a difference. Seeing an animal die too early and not knowing the cause lit a spark in her.

“I want to make a difference in animal health care,” Chitnis said.

She wanted to help make animals feel better and she knew she could help prevent what happened to her to other pets’ around the world. The most important thing to her is knowing that the animals she treats are better because of her effort. She began studying for a veterinary degree in India, but it was just the equivalent of a bachelor’s degree. She decided to come to Indiana for the more rigorous study that a bachelor’s degree in animal sciences, then a doctorate in veterinary medicine would bring.

“Traveling makes me a more open-minded person,” she said. “It changes the way of doing things.”

But all that traveling is not without challenges. When she came to Purdue, she knew she would need a way to meet other people, so she joined the Animal Sciences Ambassador team.

“I love working with people, and it was the best way to adjust since I’m from a different country,” she said.

She also said being an ambassador helped her develop leadership and communication skills. Plus, she made a lot of good friends who provided a lot of support.

“They helped me understand how things work and to understand the culture at Purdue and in America,” she said.

From all her experiences, Chitnis hopes to make lasting changes.

“In many places around the world, people are hesitant to spend their hard-earned money on pet, because they don’t always connect to them,” she said. “My goal is to make a difference in animal healthcare and to do that I want to understand many different types of animals and make sure there are affordable ways to care for them.”

By doing this she can make sure what happened to her dog does not happen again. Chitnis has a plan that involves a lot of schooling; her end goal is to become a surgeon for small animals.