Like a lot of travelers, Ashley Higdon fell in love during a trip. She fell for tropical birds while studying in Costa Rica. She was so smitten, she decided to get involved with songbird research.

But that love was fleeting, and she soon fell for another bird: owls. 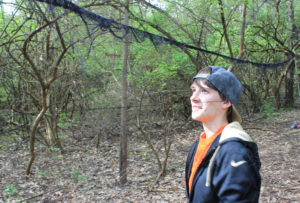 Photo by Regan Holtsclaw
Ashley Higdon checks the nets she uses in her owl research. The junior wildlife major from South Bend, Indiana, captures the birds, collects data about them, and tags them before releasing them.

“Owls are really cool,” said Higdon, a junior wildlife major from South Bend, Indiana. “They are super secretive and the only nocturnal raptors we have. And that makes them unique.”

Higdon and her research partner catch northern saw-whet owls in large nets, identify them, record their age, determine their gender, and band them. Her research helps the community know how many owls and species are in a location.

“Research is important because millions of people learn from it,” Higdon said. “It is one of the most powerful tools. It’s factual, and people can adapt it, and continue more research, and research builds on research.”

Her work has expanded over time. She doesn’t just capture the owls, she now works with her professors to propose and write grants that help fund new owl research. Research often relies on grants to continue.

“No one has ever done what we are doing before in Indiana,” she said. “It’s pretty novel, especially for undergrad students. We raised all our own grant money and it’s a very independent project.”

As you might expect, most of Higdon’s owl research happens at night. From 6 p.m. to 3 a.m. Higdon, her fellow researcher, and four volunteers spend the night walking among the research sites and calling to owls using an audio lure. They set up nets in a cross pattern two miles apart to catch the owls.

The researchers check the nets every hour for birds. Once they catch one, they check its age and put a band on it. You can tell the age of an owl by shining a fluorescent light on the inside of its wing, Higdon said. The more molted the feathers are, the older the owl is.

“Molt is the process where feathers are lost but they are then regrown,” Higdon said. “As birds age, they have different molt patterns.”

“I hope people learn more about birds that migrate. They don’t all just migrate north to south like everyone thinks,” says Higdon.