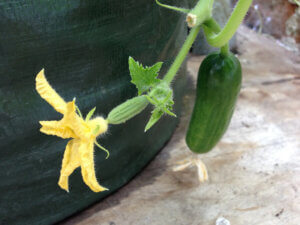 If you’ve noticed that your cucumbers are a little (or a lot) bitter lately, don’t give up hope. A little water, mulch and patience will provide relief.

Most cucumber plants contain a bitter compound called cucurbitacin, which can be present in the fruit as well as the foliage. Bitterness in cucumbers tends to be more prominent when plants are under stress from low moisture, high temperatures or poor nutrition. Although most areas of the state received abundant moisture earlier in the season, more recent hot, dry conditions have encouraged production of the bitter compound. Plant breeders, however, have developed many modern cultivars that lack the bitter genes.

For some cucumber eaters, the bitter taste is accompanied by a digestive discomfort known as a burp. Some newer cultivars of cucumbers do not have the bitter compound and, thus, no burp. So, some seed companies called their bitter-free cukes “burpless.” Newer cultivars with thinner skin also tend to be less bitter.

The amount of bitterness in the cucumber depends on the severity of the heat and drought. In most cases, cutting off the stem-end and removing the skin of bitter cucumbers removes much of the bitterness. Some fruits are bitter all the way through and should be discarded. Bitter cucumbers will not taste any better when pickled! 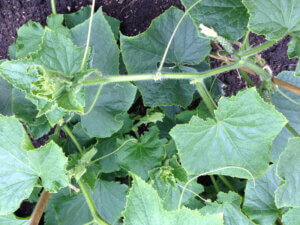 Watering during droughty periods — 1-1.5 inches of water in a slow, gentle application — will help keep bitterness out of subsequent fruits. Apply a mulch, such as straw, shredded bark or newspaper, to help cool the soil, conserve moisture and keep weeds under control.

Next year, your best bet is to plant bitter-free cultivars and provide optimum growing conditions, when possible. Many cultivars are listed as bitter-free, including Burpless, Carmen, County Fair, Diva, Fanfare, Garden Sweet, Marketmore 76, Slice More, Sweet Slice, Sweet Success, Sweeter Yet, and Tasty Green. New cultivars arrive each year, so be sure to read through next season’s garden catalogs and websites to find the bitter-free types.

Take cuttings from annual garden plants such as impatiens, coleus, geraniums and wax begonias to overwinter indoors. Root the cuttings in media such as moist vermiculite, perlite, peat moss or potting soil, rather than water.

Cut flowers from the garden to bring a little color indoors, or dry for everlasting arrangements.

Check trees and shrubs that have been planted in recent years for girdling damage by guy wires, burlap or twine.

Don’t fertilize woody plants now. It stimulates late growth that will not have time to harden off properly before winter.

Pears are best ripened off the tree, so do not wait for the fruit to turn yellowish on the tree. Harvest pears when color of fruit changes — usually from a dark green to a lighter green — and when the fruit is easily twisted and removed from the spur.

Prune out and destroy the raspberry and blackberry canes that bore fruits this year. They will not produce fruit again next year, but they may harbor insect and disease organisms.

If the weather turns dry, keep newly established plants well-watered. New plants should receive 1-1.5 inches of water every 7 to 10 days.

Keep the garden well-watered during dry weather and free of weeds, insects and disease.

Harvest onions after the tops yellow and fall, then cure them in a warm, dry, well-ventilated area. The necks should be free of moisture when fully cured in about a week’s time.

Harvest potatoes after the tops yellow and die. Potatoes also need to be cured before storage.

Harvest watermelon when several factors indicate ripeness: the underside ground spot turns from whitish to creamy yellow; the tendril closest to the melon turns brown and shrivels; the rind loses its gloss and appears dull; and the melon produces a dull thud, rather than a ringing sound when thumped.