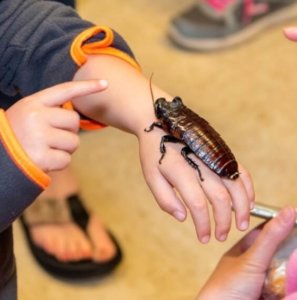 When teaching about insects, biologists almost never say “always” or “never.” The words “almost always,” usually,” “most often,” “generally,” “ordinarily,” and “normally” can save a lot of trouble because in biology, there is “almost always” an exception to every rule.

Take, for example, the characteristics that separate insects from other classes of animals. Insects are normally ectothermic or cold blooded, thus requiring the sun to warm them to activity. They ordinarily have six legs; usually three main body parts, including a head, thorax and abdomen; generally have four wings and normally lay eggs rather than give birth to living young. However, it seems that every rule has an exception. If you are one who likes to put all of biology into tight little black and white boxes, exceptions are frustrating until you become comfortable with what I call biological hedge words.

Personally, I am a big fan of hedge words because they allow entomologists to incorporate biological rules generally without having to discard them all because of an outlier here or there. And they can save us from embarrassment when we teach biology. Take, for example, the following true story.

Note: My editor asked, “Why do you preface your stories that way?  Aren’t they all true stories?” I did not answer him.

The following is a true story. As a professional entomologist and an uncle of two young boys, ages 5 and 7, the age when all children are keenly interested in dinosaurs, action figures, and bugs, I assumed a reputation of the uncle with the coolest job in the whole world. To solidify this reputation, one summer I surprised my little nephews, who live some distance away, with a Madagascar hissing cockroach in a plastic, see-through box.

Madagascar hissing roaches are not your normal cockroach, the kind of roach that most people think of: loathsome vermin that feed on garbage at night and scurry away to their hidden lairs when the lights are turned on. Rather, these are quite clean, and though they grow to be 2 to 3 inches in length, they crawl very slowly so are easy to handle. They actually make great pets. Their name comes from a hissing sound they make when disturbed. They do this by forcing air out of small breathing holes called spiracles located around sides of their body. Incidentally, this behavior can be used as evidence of a great entomologist’s ability to teach insects new tricks. Just before poking or handling them you say, “Hey kids, watch this new whistling trick I am teaching my pet roach to do.” Again, this is why my job as an entomologist is so cool – among 5- and 7-year-olds.

Because of their fascination with insects, I knew a pet roach would be the perfect gift. I was not disappointed. They were SOOO excited. They could not stop talking about it. I taught them the basics about raising and caring for it. They even had it named which, in the pet world, means officially adopted, before I broached the news to their mother. They were absolutely psyched.

Their mother, however, did NOT share their excitement! While feigning cursory interest for the sake of the children, she kept saying things like, “Maybe Uncle Tim should have talked to us about this first. Perhaps Uncle Tim should keep it at his house and then it can just come and visit. We don’t really know how to take proper care of it. What would happen if it got out? It would probably be happier at Uncle Tim’s house.”

Although she was talking to the kids, I could tell that she was really directing her comments to me – almost pleading for me to step in and save her.

Of course, I stepped in. “No worries, I have plenty at home. I don’t need this one. Besides, it’s not good at just visiting. It belongs here with you. It will be a great pet for your boys. It is easily cared for.”

Like many mothers, she was afraid that this would breed, lay a million eggs and soon the whole place would explode in filthy cockroaches. “But what if it gets out? I don’t want to be surprised by a cockroach population explosion all over in my kitchen, much less around the neighborhood.”

Again, it was up to me to reassure her. “That is not going to happen. There will be no surprises. Here is a lid for the plastic box. It will be happy living there. And even if it were to escape, it does not run. It can be easily caught, picked up and returned to its cage. Besides, you don’t see any eggs in there. There is only just the one, and you know it take two to reproduce. So, zero chance of infesting the neighborhood. On the other hand, it will be a great educational pet for your kids. All the other moms on the block will think you are easily the best mom ever. It will be no problem. You’ll see.”

She clearly did not relish the thought of a pet roach in her house. However, she slowly relented, but only after I convinced her that they are not in any way like other nasty cockroaches. “These are not filthy, do not infest homes and are easy to care for. They need only a piece of dried dog food and maybe a chunk of carrot or banana once in a while, and a source of water. And besides, it is only one. It’s not like it is a whole colony.”

Two days later the phone rang. It was my nephew. “Guess what, Uncle Tim? It had lots of babies. They’re really cool. My mom wants to know if you can explain how that could have happened.”

Hmmm. How interesting. This was a female and had been in a colony with plenty of males before the kids got it, but I guess I did not remember that Madagascar roaches are unique among insects in that they don’t actually lay eggs in the traditional manner. Biologists use the word ovipary to describe insect reproduction. In Latin, ovi means egg, and pary means to bring forth. Oviparous insects hatch from eggs that are laid outside the body of the female. This describes the reproductive behavior of insects, fish, reptiles and amphibians and is part of what separates them from other animals, such as mammals. Mammals give birth to living young, a process termed vivipary from the Latin vivi, meaning live, and when put together with pary means to bring forth alive.

So, generally speaking, in most cases the normal process of insect reproduction is most often by laying eggs. Insects usually lay eggs and are oviparous, whereas mammals give birth to living young and are viviparous. There are few exceptions to this rule, but one just happens to be the Madagascar hissing roach. I had forgotten this exception. The term ovovivipary describes this exception to the rule. It means, to bringing forth live young that have hatched from eggs inside the body of the female.

Ovoviviparous insects are actually a very interesting exception in insect biology. I took my time explaining this to my nephew and again praised him for taking such great care of their pet Madagascar hissing roach thus far – such great care, in fact, that it could have babies so quickly and apparently lots of them. He estimated about 50.

I tried to keep him on the phone as long as possible, mostly to avoid the inevitable: “Just a minute, Uncle Tim. My mom wants to talk to you.”

I quickly surmised that the boys’ mother was NOT as excited about all the little roaches as her sons were. I also learned that “congratulations” is not what she was hoping to hear and that “oops” is not a scientifically acceptable hedge word.

The rest of the story is a bit more positive, however, and shows how kids can turn lemons into lemonade. I heard through other family sources (those who were still talking to me) that the boys were soon found peddling baby Madagascar roaches up and down the streets in the neighborhood to all their little friends for 25 cents each, a potential windfall for future business entrepreneurs and biomedical professionals.

I wondered if anyone in the neighborhood was surprised to see such an apparent cockroach population explosion. Normally, they would be. At least most people. Usually.