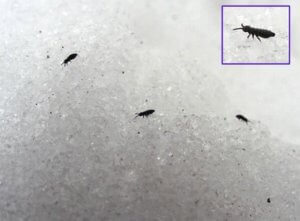 Moving black specks on snow surface are identified as a species of springtail (Collembolan) known as snow fleas.

An entomological rule of thumb is that insects are active in the spring, summer, and fall, but not the winter. It is what we always expect and even come to rely on.  By the time winter hits, insects should either be smart enough to come in out of the cold, or they should have figured out a way to “sleep” through the winter. This rule is followed by 99.9% of all insects. One stark exception is sometimes noticed on the surface of the snow on sunny days, right smack in the dead of winter.

People sometimes report seeing thousands of tiny blueish-black specks that appear as dirt or fine dust on the surface of the snow – but these specks move. Because of the unusual timing (in the middle of winter), displaying peculiar movements (jumping into the air) in unusual and entirely unexpected locations (surface of the snow), these become a distinct curiosity. When examined even more closely it becomes apparent that these are actually congregations of some bizarre kind of insect. That is when they are sent to our laboratory for identification and psychological evaluation.

Our laboratory specializes in insect identification. These are usually found to be Snow fleas (Hypogastruridae: Hypogastrura nivicola). We do NOT perform psychological evaluations on insects, however, and thus cannot vouch for their sanity, much less for the sanity of the submitter who obviously was also outside (in the middle of the winter), doing peculiar things (collecting insects) in unusual places (from the surface of the snow).

Snow fleas belong to a primitive group of hexapods called springtails (Collembola). They are so primitive that they do not possess normal insect legs, eyes, or mouthparts, and are wingless. They get around using a unique method of locomotion, have simple eyes that only detect light or dark – not the compound eyes of most insects – possess very unusual mouthparts that are contained inside the head rather than protruding on the outside like other insects, and have a very simple metamorphosis: from eggs to nymphs to adults. The thing that sets them most apart, however, is their quirky method of locomotion.

Springtails are so different in so many ways that, as of late, insect taxonomists no longer even consider them true insects but rather a related but separate evolutionary line. That said, entomologists as a group are a fairly inclusive bunch and most adopt these primitive hexapods, as well as spiders, mites and ticks, for study even if they do not look or behave like true insects.

Snow fleas derive their common name because they live in the snow and actively jump, much like fleas. Rest assured that, other than the flea-like jumping, they bear no other similarity with the common cat or dog flea. They do not bite people or pets and seldom ever get into homes.

Snow fleas are omnivores. Their food is microscopic, decaying bits of algae, fungi and bacteria that they find near the surface of the soil or in leaf litter where they live. They are most common in moist areas with plenty of organic material, such as heavily wooded areas where decaying logs and other plant material are plentiful.

Snow fleas have a distinctive method of making their way to the surface, even when snow is on the ground. In such times they are the only active arthropod above ground and have been known to make snow appear black or dark-blue in large patches where they gather in such numbers. Snow fleas may look like specks of black pepper sprinkled on the surface of the snow, and the specks appear as if they are moving. Even closer inspection reveals that these are actually tiny, insect-like critters – but they do not get around by the conventional and more sensible method of sane insects.

Springtails support themselves on 3 pairs of legs, like insects, but rather than walking, running or jumping, springtails witlessly shoot themselves around by using a unique appendage or tail at the rear of their bodies, hence their name: springtail. The tail, called a furcula, is spring-loaded and is bent forward underneath the body and secured using a hook-like structure called a tenaculum. Body muscle tension is applied to the furcula, creating significant stored energy, and when the tenaculum suddenly releases, the furcula snaps backward and the whole insect is catapulted as much as 50 to 100 body lengths into the air.

It is a very interesting mechanism and yes, there are scientists called biomechanical engineers who have actually measured the physics behind this movement. Their study methodically calculated the output. The distance of springtail propulsion was found to be up to 12 inches into the air with an initial force velocity of 4.6 feet per second. For a small insect, this is huge. What they did not measure, however, was jump trajectory, so we do not know how far laterally the springtail travels or how long it is airborne before landing. Neither did they mention the dynamics of the jump – whether the thrust causes the springtail body to rotate head over end or end over head. These are obviously important omissions and likely of huge concern to any springtail contemplating its first jump. The authors simply suggested, as a mere footnote at the end of their article, that future researchers might employ high-speed macro videography to document the jump in live motion.

It is just like an engineer to offer plenty of calculations and numbers but leave out such important practical facts. Forward somersaults or backflips make a lot of difference when it comes to the landing part of the springtail’s jump. And remember: these mini- stunt performers do not wear helmets, nor are they strapped into a landing capsule. They are on their own to simply bounce upon landing.

Until someone picks this study back up and actually performs the necessary videography, we are forced to conclude that springtails have little control over either direction or distance of their sling into space, nor do they have any way to steer once airborne. Assuming that they just haphazardly pitch themselves into the air, their emotion can only be surprise. They are probably surprised to arrive … somewhere else. We must also assume that they feel nothing when crash landing, because they just right themselves and prepare to do it all over again.

Entomologists initially question the soundness of springtail minds – employing such unorthodox methods of locomotion – but after serious ponderings, usually conclude that because springtails are all but blind anyway, this may actually be a rationally acceptable method of getting from one place to another. If they don’t know where they were launched from, it is likely of little concern to them where they will arrive. What difference could it make?

On the other hand, if it is true that in the final analysis, life really is all about the journey, springtail lives might actually be quite exhilarating.  They might extol their lives as a perpetual carnival ride with nice, soft, snow landings.

And springtails can’t be all wrong. They are massively prolific. Springtails tend to get overlooked because of their small size – 1 to 3 millimeters in length – and the fact that they are most often in the soil or the leaf litter and not easy to see. But they are reputed to be one of the most abundant of all macroscopic animals. They live virtually everywhere that there is moist soil and related organic resources. They are a surprisingly large part of our woodland ecosystems, and estimates of sheer numbers are as high as 750 million per hectare or approximately 6,968 per square foot of ground. In other words, every step you take in a wooded area is supported by 41,808 springtail legs. (Put that fact into your engineering calculators.)

In addition to their unique jumping talent and their abundance and importance to any soil ecosystem, what makes snow fleas so peculiar is that they actually become more active and more observable over the winter months. During November through March they crawl to the top of the snow, precisely when most other insects do the opposite. They can do this because snow fleas don’t freeze in cold temperatures thanks to a special protein in their bodies that functions much like antifreeze in a car, i.e., it inhibits ice crystal formation. This allows them to remain alive and active in subzero temperatures when most other rational insects, (and humans), are seeking shelter.

In the final analysis, snow fleas, gathering together on the surface of snow in the dead of winter for communal ceremonies of flinging, catapulting, and hurling themselves into the air with no apparent final destination in mind, may not seem real smart, but they are certainly unique and adaptable animals and are one of the more fascinating examples of nature’s exceptions to the rule – sensible or not.