“I feel like a little kid at Disney when I am in the Boilermaker Special,” said Quinn Toole, a senior agricultural economics major from Coatesville, Indiana.

The Boilermaker Special, a modified vehicle that looks like an old steam locomotive, is the official mascot of Purdue University. As the Special’s co-pilot, Toole is in the driver’s seat for a lot of excitement. From interacting with kids at birthday parties, to rallying 57,000 football fans, to attending the Indianapolis 500, Toole said he is always excited to drive the Special — and to watch the excitement it brings. 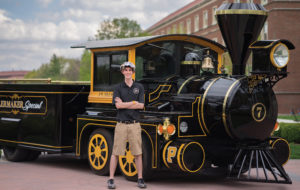 Photo provided by Quinn Toole
Quinn Toole is a co-pilot of the Boilermaker Special, the official mascot of Purdue University. The Special requires a co-pilot because the smokestack blocks the driver’s view on the right side of the vehicle.

“It doesn’t matter your age, the train can put a smile on anyone’s face,” Toole said. “It is a lot of fun when you are doing a birthday party for a little kid whose eyes get huge when the train pulls up.”

Toole said the Boilermaker Special always excited him, too. He grew up a Purdue sports fan, and loved watching the train drive around campus on game days. Driving it was something he always wished he could do.

“I remember coming to football games in high school and thinking, ‘Wow, that’s really cool,’ when I saw the Boilermaker Special,” Toole said.

When he came to Purdue, Toole joined the Reamer Club, the student organization that maintains the Special and a smaller version called the Xtra Special. In addition to being a co-pilot of the full-size train, Toole is the pilot for the Xtra Special.

“It is kind of like we are both graduating,” Toole said.

As much as Toole loved driving the train around campus, he also enjoyed the Reamer Club’s many traditions.

One tradition was serving on the “security detail” for the Boilermaker Special during football games on the road. The football team buses park around the Special to block the wind from hitting it, and Reamer club members sleep in the coal car of the train. The Reamers protect the train the train from would-be vandals and pranksters. Toole said it’s also a good excuse to stay up and have a good time.

“I had the opportunity to sleep on the train at the Illinois game in the fall of 2016 and the group of five of us all sat around talking and playing cards for a while,” Toole said.

But few experiences with the Boilermaker Special compare to the fun of startling people with the train’s distinctive, ear-splitting whistle.

“I have seen all kinds of reactions from people when I blow the whistle,” Toole said. “Some smile, some jump in fright, while younger kids jump in joy. I have even heard people ask me to blow the whistle again.”

Of course, he blows the whistle a lot during “wake ups” on home game days. The Special drives around campus early in the morning, waking up fans and students by blaring the whistle to get them excited for the game. While some might be irritated, Toole said the whistle brought him joy.

“Working with the trains and being in the Reamer Club has definitely been the highlight of my college career,” Toole said.

Boilermakers: What’s in a name?

What does it mean to be a Boilermaker?

In 1891 the Purdue football team beat Wabash College 44-0. According to Purdue Sports Information, the Crawfordsville, Indiana, newspaper (where Wabash is located) published a story with the headline, “Wabash Snowed Completely Under by the Burly Boiler Makers from Purdue.”

Purdue Sports Information also said people called Purdue students “boilermakers,” because they attended Indiana’s land-grant institution, along with the children of middle-class workers. They were considered to be beneath the students who went to fancy liberal arts colleges.

So what began as insult is now a point of pride.