The 2019 Purdue Crop Cost and Return Guide, which is available for free download from the Center for Commercial Agriculture website (here), gives estimated costs for planting, growing, and harvesting a variety of crops, as well as estimated contribution margins (revenues minus variable costs) and earnings (revenues minus total costs). Total costs include accounting and opportunity costs. Examples of opportunity costs are the interest charge on the investment in machinery, buildings, and land, and depreciation on machinery and buildings. The guide is updated frequently as grain futures prices change and the costs of inputs, such as seed, fertilizer, pesticides and fuel, fluctuate. This paper discusses estimates made in early December 2018. 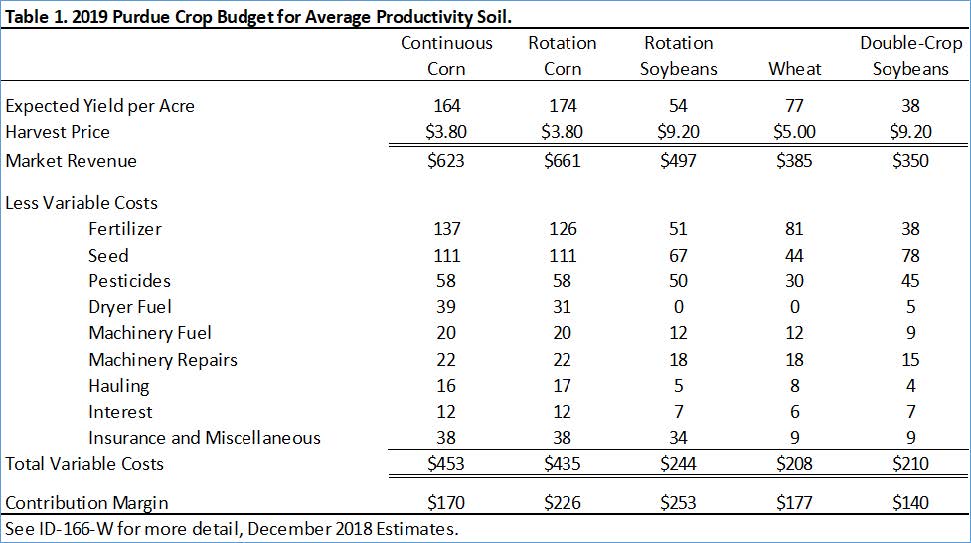 The guide presents cost and return information for low, average, and high productivity soils. The discussion in this paper will focus on the estimates for average productivity soil. Table 1 presents crop budget information for continuous corn, rotation corn, rotation soybeans, wheat, and double-crop soy- beans for average productivity soil. Double-crop soybeans are typically planted after wheat so it is typical to combine the contribution margin for these two crops when comparing to continuous corn, rotation corn, and rotation soybeans. It is important to note that crop yields have been modified in this year’s guide. The current yield estimates reflect trend yields for Indiana for each crop. The contribution margin, obtained by subtracting total variable cost from market revenue, ranges from $170 per acre for continuous corn to $317 per acre for wheat/ double-crop soybeans. The contribution margins for rotation corn and rotation soybeans on average productivity soil are $226 and $253 per acre, respectively. It is important to note that the contribution margin is used to cover overhead costs such as machinery costs, family and hired labor, and rent. Failure to adequately cover these overhead costs typically puts downward pressure on cash rent. 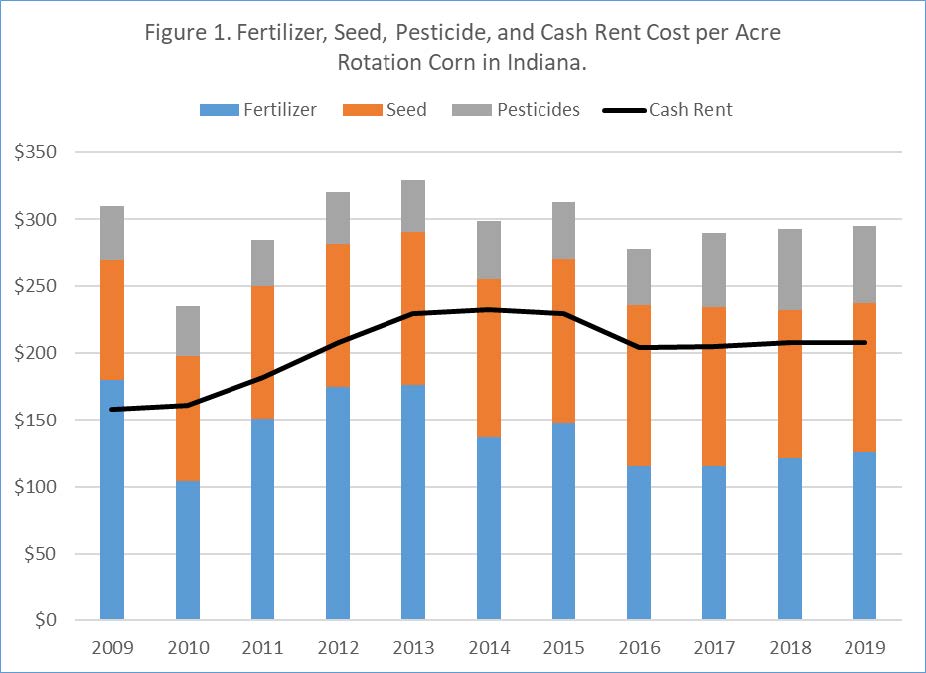 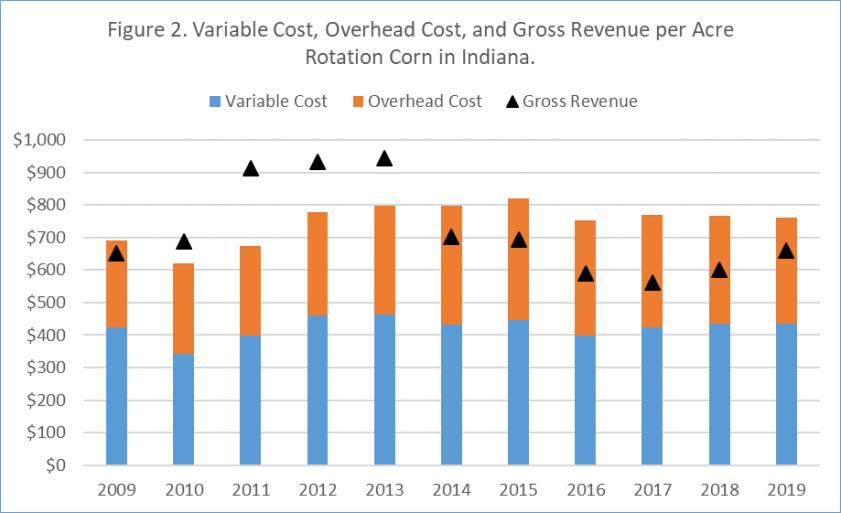 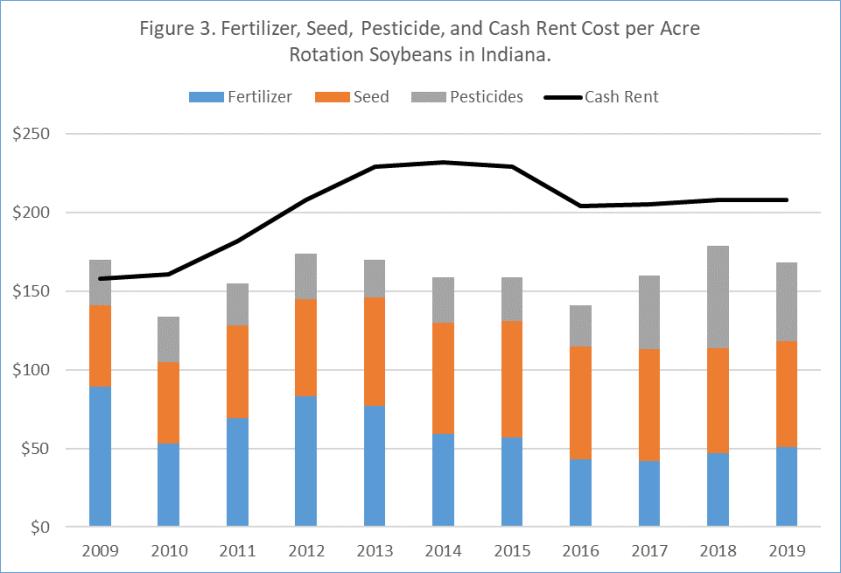 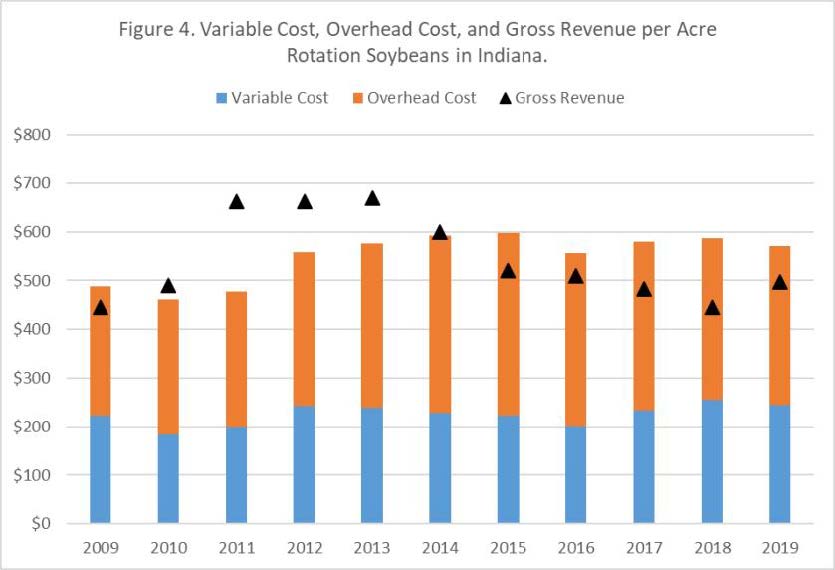 In summary, margins will remain tight in 2019. Budgeted earnings per acre have been negative for corn since 2014 and for soybeans since 2015. Though smaller in 2019, the projected difference in margins between rotation corn and rotation soybeans still favors soybeans. The difference is small enough this year that this relationship could easily switch between now and next spring.