We start this essay by defining the terms productivity and sustainability and establishing a vital bond between them. We then introduce and defend the strategic decision of analyzing the case of smallholder sugarcane farmers in Central America (C.A.) as a way to provide with meaningful contributions to the main question. The remainder of the essay will provide short- and long-term solutions to improve outcomes. In the short term we argue for the formation of farmer organizations and technology adoption that will in the long-term assist in the development of seed engineering technology and byproduct optimization as accessible, efficient, and key elements to improve sustainability, productivity, and market access of smallholder sugarcane farmers.

The traditional idea of “productivity” includes increasing output using less (or the same amount) input. Food economist Jayson Lusk argued that productivity is an often-forgotten cornerstone of “sustainability” (Lusk, 2017). He argues that by increasing productivity we also increase sustainability in the production of agricultural products. In our essay, when the word “sustainability” is used, it will mean the creative process that allows for the possibility of the growing of sugar cane to endure and remain productive over time. Eminent economist and business professor Julian Simon, poured out his belief that human ingenuity has been and will continue to be one of the main drivers of productivity. Simon (1981) credits agricultural knowledge gained from research, development induced by the increased demand, and the ability of farmers to get their produce to market on improved transportation systems, as the key drivers for output and productivity per worker and  acre to increase from the 1970’s onward. This trust of human ingenuity can lead to continued improvement upon the outstanding problems facing sugarcane small holders in C.A.

Small holders, as defined by The Food and Agricultural Organization (FAO), are small scale farmers who manage areas varying from less than 1 to 10 hectares (FAO, 2012). We focus on the current situation of small holder farmers in C.A. and primarily focus on local solutions rather than expansive global projects that require more coordination to implement. We choose C.A. because (1) it is the third largest producing region of Sugarcane in the world (FAOSTAT, 2020a) and (2), according to FAO, developing countries are leading the per capita global increase in sugar consumption, which implies that for the producing countries in C.A., this crop is not only an important export product, but is also consumed domestically. 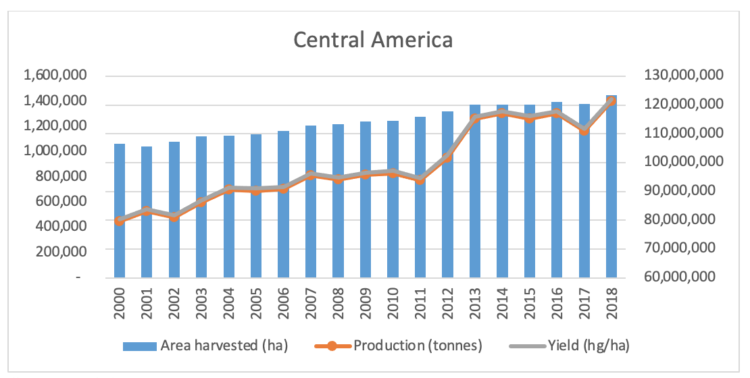 Sugarcane provides approximately 80% of the world sugar supply and is also used as raw material for ethanol production in countries like the United States and Brazil. In C.A. from 2000 to 2018, yields (tons/ha) have trended upwards and increased over 10% from 75 tons/ha in 2000 to 83.7 tons/ha in 2018 (FAOSTAT, 2020a). Using yields as a parameter of productivity, this region is the second most productive region in the world, just below North America. Additionally,  in C.A. , the total area harvested increased by a factor of 36% from the year 2000 to 2018 while production (in tons) increased by a factor of 52% (FAOSTAT, 2020b). This seems to be an increase in productivity and sustainability from the land usage perspective. We now turn to specific ideas to build upon this momentum.

A case for cooperatives:

A cooperative is typically defined as an “autonomous association of persons united voluntarily to meet their common economic, social, and cultural needs and aspirations through a jointly owned democratically controlled enterprise” (ICA, 2005). The commonly stated benefits of cooperatives are taking advantage of increased economies of scale, enhancement of the competitiveness of small farmer’s products, and promoting innovation (Deininger, 1995). Many studies in various developing countries have shown that farmers benefit from cooperatives (Abdulquadri & Mohammed, 2012; Fischer & Qaim, 2012; Shiferaw, B., Obare, G., Muricho, G. and Silim, 2009; Vandeplas et al., 2013; Verhofstadt & Maertens, 2014; Wollni & Zeller, 2007). Others show that cooperatives have failed in some cases at improving smallholder outcomes, but if done correctly, the benefits of membership likely outweigh the costs (Barrett, 2008; Markelova et al., 2009; Poulton et al., 2010). An important factor for cooperatives to be successful is the formation and design. Typically, the most successful cooperatives are primarily focused on the marketing of products, providing resources for inputs such as new technologies, scientific developments, supply chain logistics, land acquisition, and improved market access. These benefits in turn provide higher sale prices from the joint marketing and cheaper input costs from the resources provided (Fischer & Qaim, 2012; Getnet & Anullo, 2012; Shiferaw, B., Obare, G., Muricho, G. and Silim, 2009).

In the case of smallholder sugarcane farmers in C.A., cooperatives may help to decrease transaction costs, similar to the case of vegetables (Hellin et al., 2009). The cooperatives should focus on joint marketing of sugarcane from smallholder producers to increase individual farm incomes and prices. To reduce the supply chain costs, the cooperatives can pool resources to reduce transportation and input costs. The production of the farms should be individual to maintain incentives. Another focus of the cooperatives should be the adoption of technology that is lacking in C.A. such as seed engineering and other prominent technologies common to developed countries.

Development and adoption of soil and weather maps:

The strategic planning of where and when to plant sugar cane can be influenced by technology to maximize climate factors. Climate change is arguably challenging the traditional areas that are known to be suitable or ideal for sugar cane (because the temperatures and rain amounts continues to change and also the time of the year when planting is occurring in those traditional areas). Revisiting and mapping which areas are suitable at a given time (given their temperature, rain and other logistics conditions) could be a way improve yields.

A relevant example is soil databases, such as the World Soil Geographic Database (ISRIC) that comprises the features of many land areas around the world. Small holder farmers can benefit from similar databases constructed for their region. To increase the efficiency of the database, non-profit and educational organizations can notify the farmers of the availability of these databases, and teach educational courses that train them to read and interpret the information on soil quality, geographic location, weather patterns, and other related production factors of growing sugarcane. Similarly, a detailed weather and climate database could be constructed for farmers, which would include data on humidity, precipitation, solar radiation, and other related climate factors in the region.

Continuing the yields discussion, we now turn to seed engineering, commonly used to improve yields. Seed engineering is also used for other purposes such as, herbicide tolerance and insect resistance, which are of utmost importance to yields, productivity, and sustainability. For example, reductions of herbicide and pesticide use have been shown to decrease production cost and decrease environmental pollution (Singh et al., 2013). Genetic seed engineering means to insert new genes and modify existing ones. The first commercial variety of genetically modified (GM) sugarcane was approved in Brazil in 2017 (Mano, 2017). In 2018, the United States Federal Food and Agricultural Administration (FDA) concluded that sugar made with this variety was safe (Lourencao, 2018). The adoption of GM seeds in developing countries may have political or cultural barriers. The cultural barriers for adoption can be addressed through education about the engineering process, the benefits of using the seeds, (e.g. cost, yields, sugar content, pesticide use, herbicide use, and drought resistance) but most importantly the safeness of commercial sugar from GM varieties.

The utilization of byproducts generated by the production and refining of sugar from sugarcane is also a key component of sustainability. Broadly speaking, sugarcane can be processed for both sugar and biofuel (ethanol). Traditionally, sugarcane ethanol is produced from the fermentation of sucrose which occurs after harvest. First the canes are crushed to extract the juice, then the juice is fermented with yeast, finally after a few additional steps ethanol is obtained (Clifford, 2020). However, since this process involves juice extracted from the canes, it potentially competes directly with sugar production and hence food (Basso et al., 2013; de Castro et al., 2018). Hence, we focus our discussion on bagasse, the fiber component of the cane after extraction. This by-product is composed of approximately 50% cellulose, an important ingredient for producing second generation ethanol, the ethanol that is considered the biofuel with greatest potential to substitute fossil fuels (Basso et al., 2013; Sabiha-Hanim & Halim, 2018). Bagasse can lead to an increase in additional revenues for smallholders, and allows flexibility for farmers in the species of sugarcane produced. Species that have a higher juice content can provide more revenue in the form of sugar, and those that have less juice and more fiber (bagasse) can earn more revenue from bagasse for ethanol production. However, similar to soil and climate database, educational endeavors for small farmers regarding these revenues channels and strategic allocation of resources is imperative.

The ideas that we are proposing are tied directly to the improvement of market access. To be specific, as the body of empirical evidence has shown, association of farmers in a cooperative primarily focused on the marketing of sugar and sugarcane byproducts, will directly affect their ability to market their product more effectively. The ability of a cooperative to invest in research and development (in partnership with Universities, government and NGO’s) will allow for the development of seed genetics and the adoption of similar technologies that exist but are not used by small farmers. Lastly, better utilization of sugar cane for the efficient production of sugar and ethanol from the bagasse will be better materialized by the adoption of new processing technologies, distribution of information and lastly better negotiating and marketing through the cooperative.

Concluding, we have discussed how the sustainability, productivity, and market access, of smallholder sugarcane farmers be improved. For the purpose of offering specific ideas we have used the example of small holder sugar cane farmers in C.A as the basis of our proposal. Narrowing down to this region has allowed us to understand the complexities of small holder sugar cane production in an important sugar cane producing part of the world. We have discussed 4 potential ways that small holder sugar cane farmers can improve their production and revenues: (1) the formation of a cooperative as a strategic way to achieve better marketing of the final products and the sourcing of inputs, (2) research, development, and adoption of seed engineering technology as an opportunity to improve productivity and sustainability through higher yields, less land use, and less inputs used in production, (3) the development and adoption of weather and soil maps as a tool to inform farming decisions, and (4) the optimization of byproducts such as bagasse as an inherent aspect of productivity and sustainability. We would like to close with a quote from American Agronomist, Nobel Peace Prize, Presidential Medal of Freedom and Congressional Gold medal recipient Norman Borlaug quote “There are no miracles in agricultural production”. To that we say it is true, but we can only be amazed by the almost miraculous effects that technology and structural organization can have.