U.S. Is A Pork Export Powerhouse

Recent disruptions to economic activity around the world as a result of the Corona virus have served to reemphasize the importance of trade to the U.S. pork industry. Trade in pork products has grown as the U.S. has turned into a pork export powerhouse. Importantly, the relative importance of U.S. pork’s customers has changed dramatically in recent years suggesting future growth could lie outside traditional destinations. Finally, growth in pork trade means economic conditions in importing countries are important to the U.S. industry.

By 1995 U.S. pork exports measured in carcass weight exceeded pork imports, turning the United States into a net exporter of pork. Exports of pork from the U.S. continued to grow throughout the rest of the 1990s and continued into the 2000s. Over the most recent five years, U.S. pork exports averaged the equivalent of about 22 percent of U.S. pork production. Stated another way, the U.S. was exporting the equivalent of just over 1 out of every 5 hogs in recent years.

While U.S. pork exports were growing, pork imports stagnated in relative terms. In recent years, imports of pork averaged the equivalent of just 4 percent of U.S. production. The result, over the last three plus decades the United States became a large net exporter of pork. Net exports (exports minus imports) of pork were the equivalent of just over 19 percent in 2019 and increased steadily over the last five years.

At the same time, Canada and Mexico have become even bigger trading partners than they were years ago. For example, in 2019 25 percent of U.S. pork exports went to Mexico and 9 percent of exports were shipped to Canada. Although both countries were important destinations three decades ago, growth in shipments to these two North American destinations grew rapidly as the total U.S. pork export market grew. Compared to 1994 when NAFTA was implemented, pork exports to Mexico and Canada increased tenfold. In contrast, exports to Japan over this same time frame increased fivefold.

What about China? In 2019, mainland China was the destination for 16 percent of U.S. pork exports. That trade volume was boosted sharply by China’s problems with African swine fever as U.S. shipments to China tripled in 2019 compared to 2018. In contrast to 2019, mainland China took in just 6 percent of U.S. pork exports in 2018. Depending on the status of trade negotiations with China, future growth in pork exports to China could be a bright spot for the U.S. pork industry. 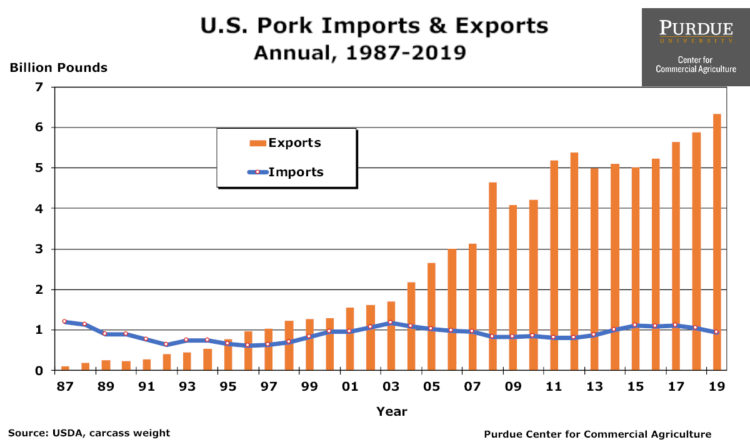 Improvements in production performance are critical to controlling production costs and for the industry to remain competitive in comparison to swine producers in other countries and competing meats.  This article examines long-term trends in pigs per litter.

The biggest year-over-year increase in pork shipments was to mainland China, which more than doubled in 2020. Pork exports to China during 2020 accounted for nearly 30 percent of all U.S. pork exports, up from a market share of just 14 percent in 2019.