COVID-19 Impacts on Pork and Beef

Processing plant closures sharply reduced livestock slaughter volume for both cattle and hogs in recent weeks. Federally inspected cattle slaughter the week ending April 25th, at 469 thousand head, was down 27% compared both to the first week of 2020 and the same week a year earlier. Hog slaughter volume the last full week of April also declined sharply, falling 15% below a year earlier and 26% below the first full week of January. The loss of pork processor capacity will be even more severe this week with additional Eastern Corn Belt plant closures taking place, including Indiana Packers’ Delphi, Indiana and Smithfield’s Monmouth, Illinois plants. Based upon announced plant closures, approximately 21% of the pork industry’s processing capacity is currently offline. But the actual reduction in pork processing capacity is greater than that figure suggests because some plants are operating at less than normal capacity because of labor shortages related to COVID-19.

The reductions in pork and beef processing capacity are reducing the supply of beef and pork available at the wholesale and retail level, while at the same time reducing processors’ demand for live animals. The reduction in meat supplied to consumers is starting to push wholesale beef and pork prices up. For example, the weekly average of the Choice boxed beef cutout, which ranged from about $205 to $211 per cwt. during February, rose to $272 last week. The pork cutout weekly average followed a different price path than the beef cutout, rising sharply during March before weakening in early April, but it too strengthened last week as supplies tightened. Last week’s pork cutout average rose $18 per cwt. compared to a week earlier while the weekly average Choice beef cutout rose $20 per cwt.

The reduction in packing plant capacity has dramatically reduced processors’ demand for live animals. As a result, negotiated live animal prices have fallen sharply over the last several weeks. Hog prices peaked in early March with carcass base prices in the Iowa-Southern Minnesota region averaging $59 per cwt. the first week of March. Prices weakened throughout March and early April, however, and averaged just $34 to $36 per cwt. the last two weeks. Slaughter steer prices, which traded near $120 per cwt. (live weight) during most of February, declined the first three weeks of March before rising briefly the last week of the month. The price decline resumed in April, however, and last week fed steer prices averaged just $100 per cwt. in the Southern Plains region. Feeder cattle prices have held up better than fed cattle prices, but have also declined. Weekly average prices for 700-800 pound steers in Kentucky traded near $130 per cwt. during January, February and early March, before dropping as low as $110 in late March. Recent prices have recovered somewhat, hovering near $118, but that was still nearly 10% lower than in January and February.

Near term, the loss of processor capacity is of greatest concern in the pork industry. The vast majority of U.S. pork is produced in hog confinement systems that, once a pig is born, provide relatively little flexibility with respect to when the finished hog is ready for processing. As a result, relatively short marketing delays create major on-farm capacity problems as producers simply run out of space for market-ready hogs leading to concerns that producers will be forced to resort to euthanizing market hogs if processor capacity does not increase quickly.

Although the loss of processor capacity is also problematic in the beef industry, producers have more flexibility with respect to the length of time it takes to produce a market-ready steer or heifer than do pork producers. Some evidence of this flexibility showed up in USDA’s April Cattle on Feed report, released late last week.

The Cattle on Feed report indicated cattle feeders reduced net placements of cattle on feed during March, while also aggressively marketing fed cattle. Feeders reduced placements on feed by 23% compared to last year and 21% compared to the five-year average for the month of March. The reduction in placements on feed was a direct response on the part of cattle feeders to an expected decline in beef demand related to COVID-19. The decline in placements during March followed a much smaller placement decline of 8% in February. Smaller placements in late winter and early spring will reduce beef supplies, but not until this summer. Aggressive fed cattle marketings, which rose 13% above both a year earlier and the 5-year average for March, meant cattle feeders entered April with their marketings relatively current leaving them somewhat better able to manage their way through recent packing plant closures. However, additional or extended beef plant closures could still cause cattle supplies to back up in feedyards. 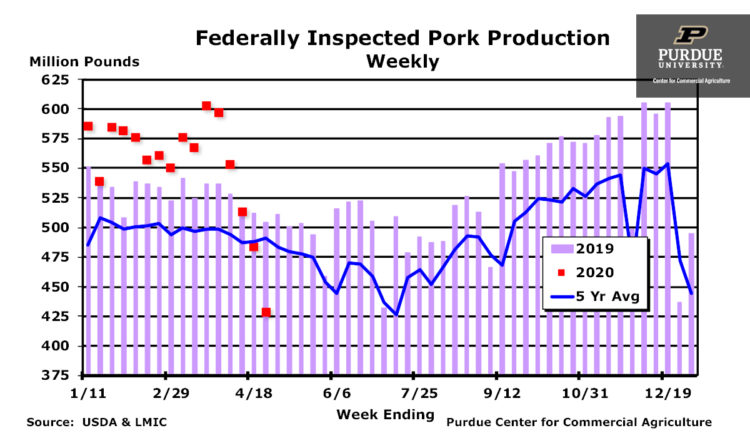 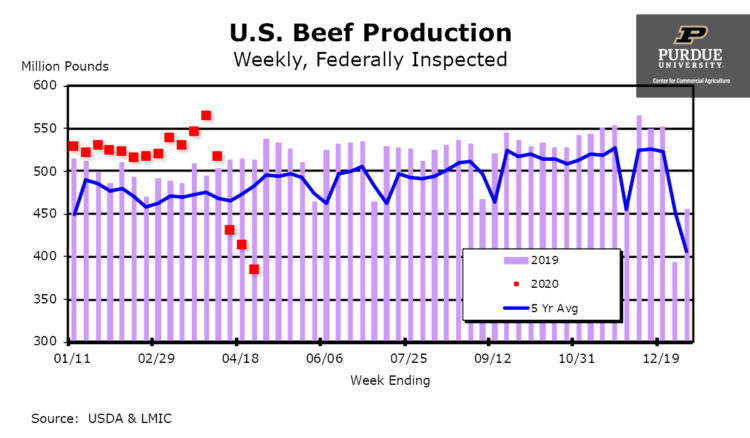