Corn and soybean prices have risen sharply since mid-August 2020. Smaller than expected 2020 U.S. harvests of both corn and soybeans are a key reason for the price rally. But just as important is the rise in exports of both crops to overseas destinations, primarily China. The rise in China’s demand for feedstuffs is tied to the resurgence in the Chinese pork sector as China attempts to rebuild its hog herd and boost the supply of pork to Chinese consumers. 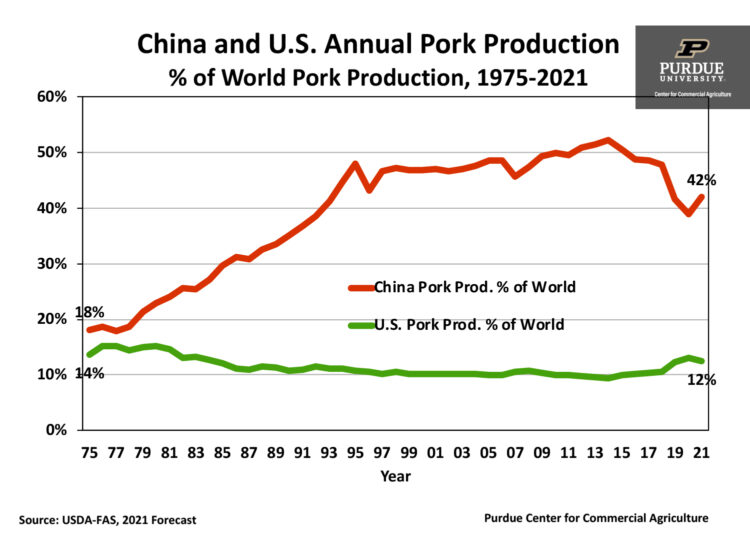 In 2017 hog slaughter in China totaled 702 million head, nearly six times the number of hogs processed in the U.S. that year. ASF devastated the Chinese hog herd beginning in 2018 and by 2020 hog slaughter volume plummeted to an estimated 455 million head, a decline of 36 percent. Chinese pork production declined from just over 120 billion pounds in 2017 to less than 84 billion pounds in 2020. To help put that difference in perspective, the 36-billion-pound reduction in China’s annual pork production exceeded the volume of pork produced in the U.S. during 2020, which was just over 28 billion pounds. 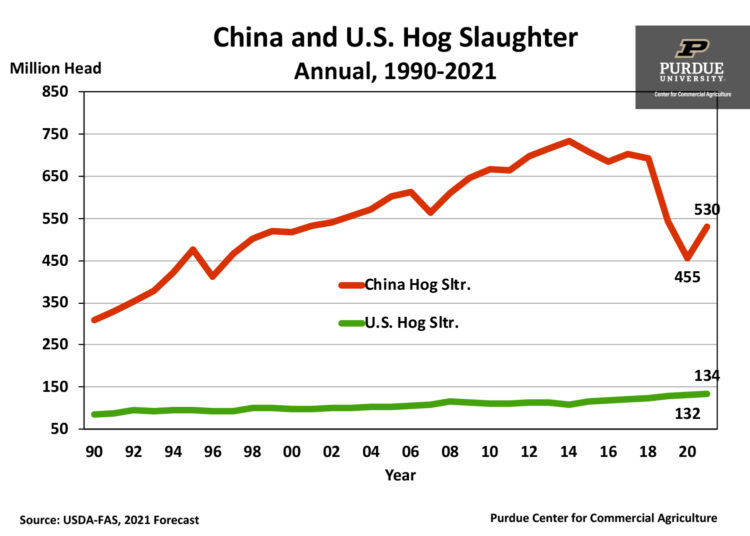 The impact of the expected rise in Chinese pork production is being exacerbated by a shift in the way pork is produced in China. Historically, a large portion of China’s pork production capacity came from small hog operations that didn’t employ U.S. style hog diets. In an attempt to boost pork production rapidly, China has encouraged the development of large-scale commercial type operations that rely on hog diets more comparable to U.S. feeding regimes. The industry expansion, combined with the ongoing change in production technology, is placing more pressure on China’s feedstuffs sector leading, in turn, to a large increase in demand for imported corn and soybeans.

In addition to boosting demand for U.S. corn and soybeans, ASF also provided a boost to U.S. pork exports. Preliminary data for 2020 indicates U.S. pork export volume rose approximately 18 percent above 2019’s volume. This despite the fact exports to Mexico and especially South Korea were weaker than in 2019. The biggest year-over-year increase in pork shipments was to mainland China, which more than doubled in 2020. Pork exports to China during 2020 accounted for nearly 30 percent of all U.S. pork exports, up from a market share of just 14 percent in 2019. Although pork exports to China could slow down during the last half of 2021, economic recovery in other key markets later this year could provide ongoing support to U.S. pork trade.

Improvements in production performance are critical to controlling production costs and for the industry to remain competitive in comparison to swine producers in other countries and competing meats.  This article examines long-term trends in pigs per litter.

World pork markets have been disrupted the last couple of years, first by African Swine Fever (ASF) in China followed by a U.S.-China trade dispute and then, in 2020, by the coronavirus.

Join us Wednesday, March 10 at 12:30 p.m. EST for an update on the corn and soybean outlook following release of USDA’s March Crop Production and World Agricultural Supply and Demand Estimates (WASDE) reports. Registration is free but necessary to receive the link to join live or get notice of the webinar recording.