“I thought this was going to be a fairly innocuous lunch but I’m starting to worry,” entomology professor Tim Gibb said. “I suspect this isn’t just going to be lunch and a lecture.”

Gibb was one of several dozen attendees at the Hunger Banquet on Jan. 22, an event co-hosted by the Colleges of Agriculture and Health & Human Sciences. The event was advertised as an enlightening experience about hunger insecurity. When participants arrived, however, it became clear their interaction with hunger might be more than hypothetical.

Upon entering the room, attendees were handed a ticket, which determined where they would sit, the outer edges of the room, which hosted the largest number of people, the middle circle, a more modest number, or the center table, which sat only four participants. Lunch was soon delivered.

The outmost tables received a rice, a couple of bag of chips and some beans, the middle tables received rice, beans and sausages while those few at the center enjoyed a full meal complete with protein, fresh steamed vegetables, iced tea and caramel drizzled cake.

After everyone had been served, Vanessa Pacheco, Purdue’s coordinator for civic engagement and the event’s speaker, invited everyone to eat. 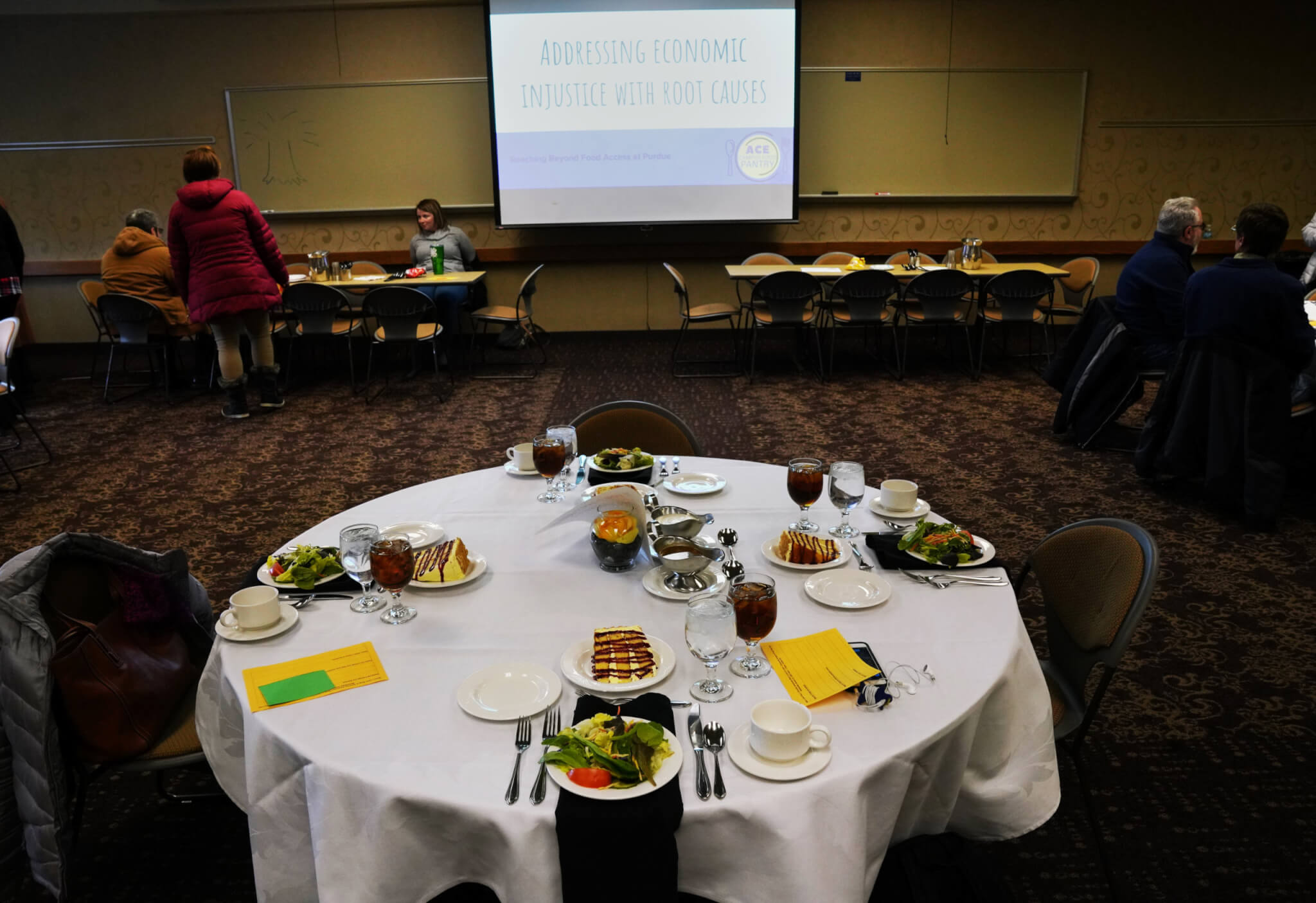 A table set up at the hunger banquet. This was the middle table with plentiful food.

“By now it should be obvious there is something going on,” she said. “In order to talk about our discomfort you have to be able to engage with those uncomfortable things.”

Purdue students are not immune to this trend.

Pacheco, who helps manage the on-campus, student-run ACE Food Pantry, said during the fall semester of 2018 the pantry served over 580 clients. In the month of October 2019 the pantry saw 280 visits. The needs of students that utilize the pantry vary. Sometimes, Pacheco said, they’re coming in to grab granola bars to get through classes because they don’t have the time or funds to eat on campus. Other times, students are using it to fill very basic needs from toilet paper to their supper.

“I hear students joke about whether they should spend money on tuition or dinner. I also hear them say things like ‘I just spent the last dollar in my bank account,’” Pacheco continued. “And I feel pride for what we do in the pantry, helping those that have these issues, but also concern that there is a need for it.”

Initiatives like the pantry are important, but are ultimately Band-Aids. In the spirit of Martin Luther King Jr., Pacheco advised addressing the root cause of issues like food insecurity, from lobbying lawmakers to support more substantial and inclusive legislation surrounding social welfare programs like SNAP to upping minimum wage to a living wage and fighting economic, social and racial inequality. Quoting King, Pacheco reminded the audience that, “true compassion is more than flinging a coin to a beggar. It comes to see that an edifice which produces beggars needs restructuring.”

An attendee eats their lunch of rice and beans.

During Pacheco’s talk, the audience grappled with the awkwardness of different lunches. Some tables shared with the less fortunate while others barely ate at all, feeling concern about the unfairness of the situation. Many agreed, there was something about the physical representation of food insecurity that placed focus on issues of inequality

Hajera Zemy, a sophomore, said she is intimately acquainted with issues of hunger and food insecurity, but she hadn’t realized it was such an issue in the United States or on her own campus. “I’m from India where food insecurity is always an issue for a major part of the population,” Zemy said. “I just didn’t think it was as serious here. Now I know.”

Zemy was seated at one of the exterior tables, but they were lucky, she said, because one of the more privileged tables shared food with them. Lowell Williams, IT project manager in the College of Agriculture, who sharing their food, said it seemed like a no-brainer. “You don’t always have to play within the rules,” he said.

“When you’re talking about hunger and food insecurity it’s just a concept,” Natalie Wilson, an analytic chemist with the Office of Indiana State Chemist, said. “When it’s all laid out and you’re interacting with food and hunger it’s something else entirely.”