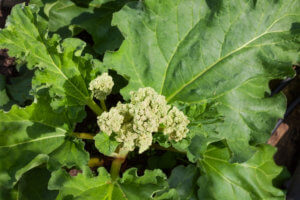 Gardeners frequently ask why their rhubarb is bolting. Well, if you think of it from the plant’s perspective, it is just a part of the plant’s natural life cycle. Flowering is part of the reproductive phase that leads to the production of fruit and seed.

But from the gardener’s perspective, the production of flowers, fruit and seed in rhubarb wastes the plant’s resources, which could be better spent on producing edible stalks or storing carbohydrates to use for the following season. And if allowed to mature seed, the resulting seedling offspring are often less desirable than the mother plant, which we paid good money to buy as a named cultivar. In fact, seedling offspring are often more likely to bolt than some of the more modern hybrid cultivars.  Seedling offspring can also be vigorous enough or just numerous enough to take over the original planting.

It does appear that some rhubarb plants are more prone to flowering than others. Old-fashioned varieties, such as Victoria and MacDonald, are reported to be heavy seed stalk producers. Canada Red and Valentine are less likely to bolt. Plant maturity is also a factor, with more mature plants being more likely to bolt than youngsters. Dividing the crowns every 4-5 years should help rejuvenate the planting. Applying moderate amounts of fertilizer, such as well-composted manure, each spring should also discourage bolting.

Weather no doubt has a role to play as well. Rhubarb is a cool season perennial that can remain productive for 8-15 years, if given proper care. Plant stress, such as temperatures above 90 F, prolonged drought during hot weather, poor nutrition, etc., may also promote bolting.

The bottom line is that rhubarb may bolt for a variety — and likely a combination — of several factors. Many gardeners may not know what cultivar they have, and there’s not much we can do about the weather. So, if your rhubarb should happen to bolt, remove the flowering stalks just as soon as they are visible, to which the plant will likely respond by sending up another. If you keep at it, soon the plant will return to the desired priority for foliage production.

Another question that sometimes comes up is whether the flowering makes the leaf stalks poisonous. The answer is no, the leaf stalks remain edible, regardless of whether flower stalks are present. However, the leafy blade portion is always poisonous due to a high level of oxalic acid.