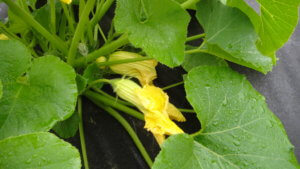 A common complaint among vegetable gardeners is that their squash plants have a lot of flowers, but many of them just fall off without producing any fruit. This same observation can be made of cucumbers, melons, pumpkins and gourds, all of which are collectively known as “vine” crops to home gardeners. These plants are all members of the Cucurbitaceae family and are also commonly referred to as “cucurbits.” 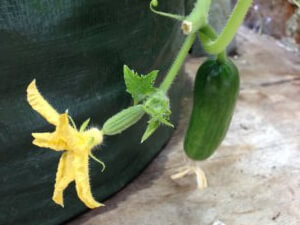 It is easy to tell the difference between female and male flowers in this group of plants. Female flowers look as if they have a miniature fruit (squash, cucumber, gourd, etc.) just below where the petals are attached. Male flowers simply have a slender stalk below the petals.

However, if female flowers are the ones dropping, then it is safe to conclude that some factor is preventing successful pollination. The most common culprits include excessively hot or cold temperatures and lack of bee activity due to weather, low population, etc. Some commonly used insecticides, including carbaryl (Sevin), are highly toxic to bees, so if you must apply such products, time your sprays for periods when the bees are not active.