Manufacturing in the Indiana Economy

Indiana’s favorable geographic location, large labor pool, and manufacturing-friendly state and local government policies have been instrumental in attracting and retaining manufacturing firms (Houin and McNamara, PAER, Nov. 1997). Employment growth in the Indiana manufacturing industry from 1983 to 1995 is evidence of this success. Indiana’s manufacturing employment growth rates are particularly impressive when compared to the national economy.

Manufacturing is not only a substantial source of employment but is an important source of revenue for the people and state of Indiana as well.

Manufacturing employment in the transportation equipment and rubber/rubber products sectors increased by 37% and 29%, to 980,100 and 969,800 jobs, respectively, an addition of 484,000 jobs. Printing and publishing materials manufacturing added 308,300 jobs to the national economy over the same period. Other sectors with positive changes in employment levels added 819,800 jobs to the U.S. economy over the 1983 through 1995 period. 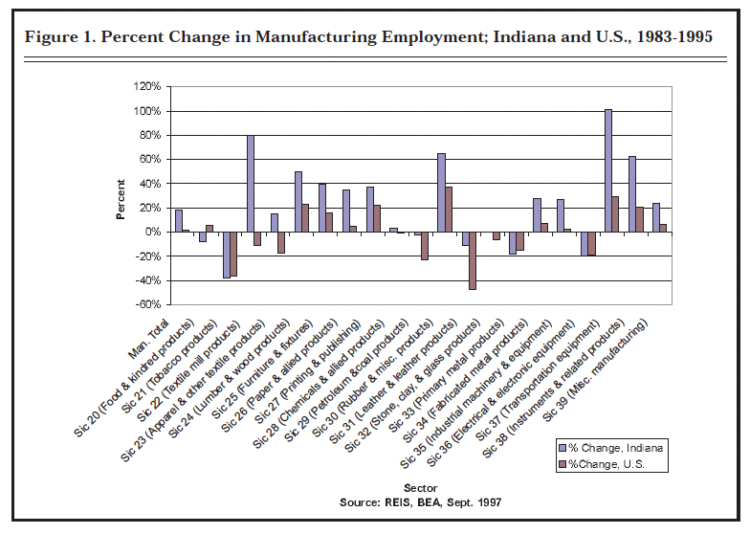 Over the same period employment in the leather and leather goods sector declined by 47% to 114,000 jobs in 1995. Employment in tobacco products and petroleum and coal products manufacturing decreased by 36% and 23%, respectively, a loss of 65,700 jobs. Other sectors with losses in employment had 815,600 fewer jobs.

Indiana manufacturing employment in 1995 accounted for 696,239 of 2,549,312 jobs, representing 27%of Indiana employment, up from 23%in 1983. Manufacturing of transportation equipment, textile mill products, rubber and miscellaneous products, and instruments and related products exhibited the largest percentage change in employment.

The location quotient (LQ) is a measure of the degree of an industry’s concentration in a state or region in comparison to the general economy. LQ values below compare manufacturing shares in the Indiana economy to national shares. The LQ is defined as:

SIC 21 (Tobacco Products), SIC 22 (Textile Mill Products) and SIC 23 (Apparel and Other Textile Products) have LQs of .06, .08 and .46, respectively. These industries have little presence in the Indiana economy as compared to the national economy. LQs for the other 13 manufacturing sectors indicate the sectors have similar or slightly larger concentrations in the Indiana economy than in the national economy.

Location quotients also were calculated with the number of establishments (Table 1). The LQ gives an idea of the relative size of Indiana establishments in that sector com-pared to the size in the national economy. LQ values for the primary metal products sector are 4.18 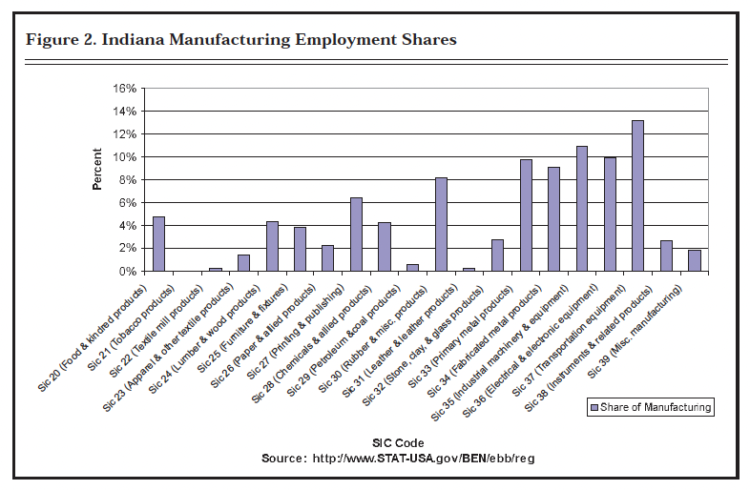 Indiana has a strong manufacturing economy, employing 27% of the state’s workforce in 1995. Manufacturing employment increased by 18%from 1983 to1995, to 696,239 jobs. Fifty-three percent of employment in Indiana manufacturing occurs in five sectors; transportation equipment; industrial machinery and equipment; primary metal products; electrical and electronic equipment; and fabricated metal product products. In general, the Indiana manufacturing economy has mirrored national trends. Of the 20 manufacturing sec-tors in Indiana, 13 had positive growth rates, while 6 had negative growth rates. Location quotient values suggest that out of the 20 manufacturing sectors in Indiana, 10 had larger shares in the Indiana economy than in the national economy, 7 had shares similar to the national economy, and 3 had smaller shares. 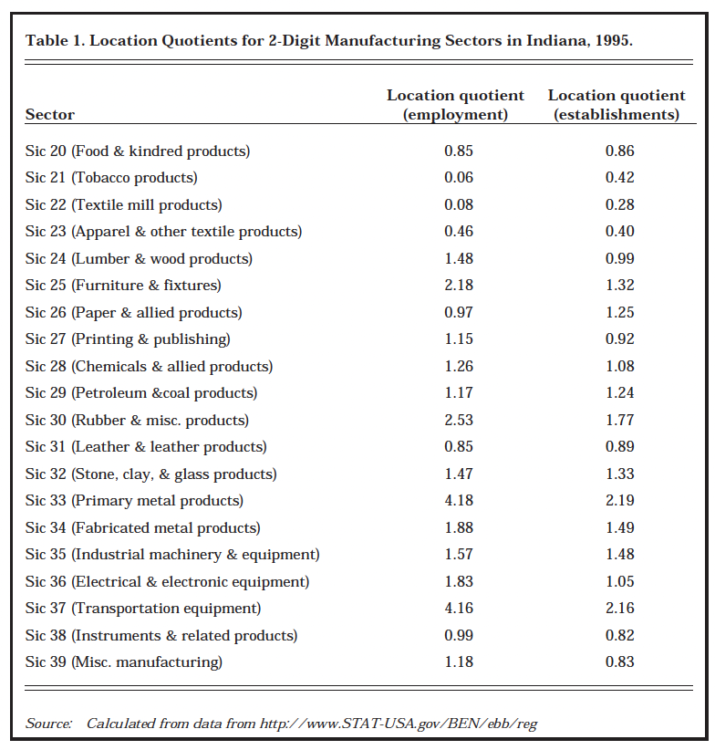