“With time, I can help others — farmers, growers, people that handle the food, people that grow the food. That motivates me, that I will be part of the change.”

Growing up in Cali, Colombia, Hansel Mina noticed that despite his country’s rich biodiversity, malnutrition was a pervasive problem among its population. He further observed that too many unprocessed fruits and vegetables were disposed of rather than consumed. “For me it was kind of heartbreaking,” he says. “I wanted to contribute to this issue.” In 2013, as an undergraduate in food engineering at Universidad del Valle in Cali, he was selected for a six-week internship at Purdue with Clinical Assistant Professor of Food Science Amanda Deering. Her research aligned with Mina’s interest in food processing and quality control, but Mina felt ill-equipped at first. “The facilities and the level of research here were totally different,” he recalls. “Breaking the English barrier and the knowledge barrier was very challenging.” After returning to Colombia and completing his degree, he worked for the International Center for Tropical Agriculture  (CIAT), pursuing research in cassava for two years, “but I wasn’t contributing enough to solving the real problem,” he says. So in spring 2017 he took Deering up on her standing offer to return to Purdue for doctoral study.

Mina’s research is with the Center for Food Safety Engineering (CFSE). His focus is to implement the use of advanced equipment and technologies, such as laser-based BARDOT (bacterial rapid detection using optical scattering technology) in generating bacterial libraries that will be used in the detection and identification of bacteria in lettuce. In another project, Mina investigates how fresh produce become contaminated, during both preharvest and postharvest, with pathogenic bacteria harmful to humans. “So many recalls are happening because of E. coli and Salmonella spp. contamination, we are trying to track back where they got contaminated and in what stage,” he explains.

“Every day I learn something,” Mina says. He now views with good humor what used to be frustrating, such as repeating the exact same protocol with different results and no apparent explanation. That’s when his advisor is especially helpful, he says. “A food science graduate herself, she has empathy for what we are going through,” he says. “She is a key support for my being here at Purdue, and I appreciate that she encourages me to keep moving on this path.”

Deering’s work has also given Mina valuable insight into Extension, he adds. Their Spring Fest activity gave children and their families a microbiological peek at “What’s Growing on Our Spinach.” In other Extension efforts, Mina taught people how to effectively wash their hands, and he especially enjoyed using his native Spanish to train farm workers on good agricultural practices.

Mina has joked with his committee members that he’ll think about how he’ll use his PhD after he has it in hand. “But I really like what my professor does in the Extension program — training farmers,” he says. “The field is so dynamic, and our goals keep changing as we keep learning.” In his time away from the lab, he enjoys outdoor activities like running, hiking and rollerblading, as well as playing the guitar and listening to all genres of music. 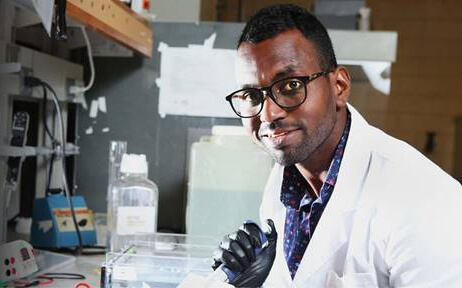