Much like the story of the drunk searching for his car keys at midnight under the streetlight, when he actually lost them in the nearby park, agricultural scientists have been looking for climate impacts in those areas where they have the best data and models. When a policeman asked the drunk why he wasn’t looking for his keys in the park, the drunk responded: “because this is where the light is!” While those of us studying climate change and agriculture have not been confronted quite so directly, I think most scientists would agree our focus on the world’s four major staple crops: corn, soy, rice and wheat is because high quality data and  models of crop growth are readily available for those staples.

Indeed, we conducted a meta-analysis (Moore et al., 2017) of all of the climate impact studies submitted to the last Intergovernmental Panel on Climate Change (AR5) and found two-thirds of the 1800 impact estimates pertained to the four staple crops. There were insufficient research findings for the remaining 171 world crops monitored by the UN Food and Agricultural Organization to allow proper statistical synthesis of climate impact estimates.

While these ‘big 4 crops’ dominate global calorie production, this is not true for critical micro-nutrients like vitamin A, zinc, iron or iodine. Micro-nutrient  deficiencies are responsible for stunting and wasting of millions of the world’s poorest children while posing significant risks to maternal health. These vitamins and minerals are more prevalent in fruits, vegetables, and livestock products, all of which have largely been neglected by climate impact analyses. Setting aside the nutrition issues, and considering strictly economic importance, major staple crops account for only a quarter of the value of global agricultural output. In the US this is higher but staples still only account for one-third of farm output value, while livestock products account for a larger share of U.S. farm revenues (40 percent).

Climate Impacts on Farm Workers have been largely ignored

In recognition of this knowledge gap, we have initiated an interdisciplinary research program at Purdue (GLASS: Global to Local Analysis of Systems Sustainability) which, among other things, is studying the impacts of heat stress on farm workers and hence on the global food system. The scientific foundation for this work is research undertaken in the Earth, Atmospheric and Planetary Sciences Department by Matthew Huber and members of his lab group. They have combined climate model predictions of temperature, humidity and solar radiation with models of the human body’s ability to dissipate internally generated heat (Figure 1) to estimate how climate change might limit individuals to work outdoors in strenuous activities such as farming in the tropics (Buzan & Huber, 2020). They find that outdoor labor capacity in tropical portions of Latin America, Africa and Southeast Asia could be cut in half by the end of this century! 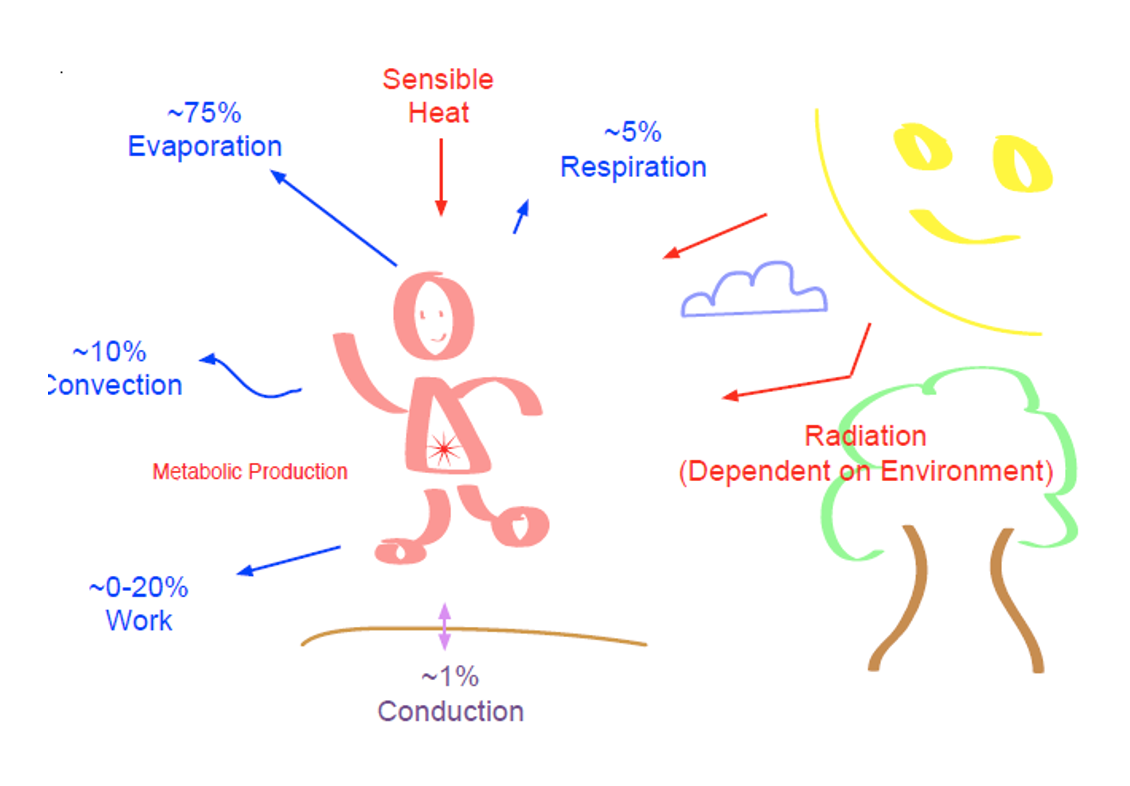 When we compare the loss in labor capacity in Southeast Asian rice production to the estimated yield impacts which have previously dominated climate change studies in that region, we find that humans fare much worse under climate change than do the rice plants (Hertel & de Lima, 2020). Paddy rice is well-adapted to high temperatures, which is one reason it is widely grown in the tropics. However, humans, when confronted with the combination of high temperatures and high humidity, are unable to dissipate the heat generated internally under outdoor labor. They suffer greatly in our projections of future climate impacts. In short, we have been studying the wrong organisms to understand changes to food production under future climate!

Diminished labor capacity for farm labor means that more workers must be employed in agriculture, and large investments aimed at mechanizing the most strenuous tasks will be required. This raises food prices in the many places already suffering severe food insecurity. As food production drains labor and capital from the rest of the economy, economic growth slows down and hinders the ultimate pathway out of poverty for most of these farm households.

In assessing priorities for future research into climate impacts it is useful to think about the fundamental drivers of long run agricultural output growth. Figure 2, taken from a study done my collaborator, Keith Fuglie and his colleagues at USDA’s Economic Research Service, shows the fundamental drivers of global farm output over the past 60 years. The first thing to note is that farm land expansion accounted for just a small portion of the total 2-3%/year annual output growth over this period. Growth in commercial (intermediate) inputs, including fertilizer, chemicals and seed, played an important role in the 1960’s, 1970’s and 1980’s. This was the period of the green revolution when farmers in Asia, Latin America and North Africa adopted new seed varieties requiring far more commercial inputs than traditional crop varieties. Labor also contributed importantly to output growth over this period, as more educated farm workers added value to production. However, something striking happened in the 1990’s – crop prices fell to historic lows and farmers could no longer afford to expand input usage. Instead they relied on squeezing more production out of the same amount of inputs. In other words, they ‘tightened their belts’! 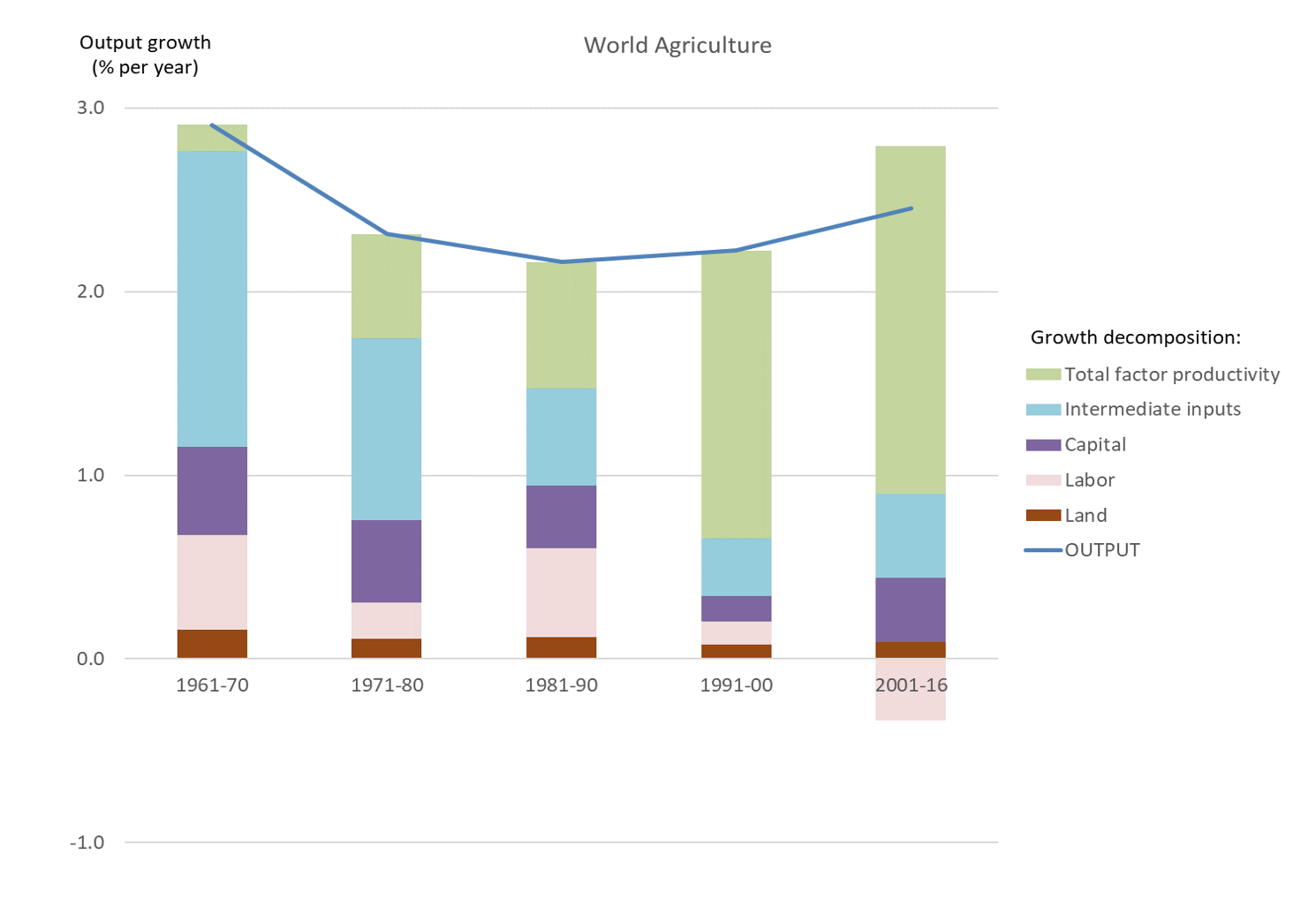 Economists call the gap between input growth and output growth ‘total factor productivity’ (TFP for short — ‘total’ in this this expression distinguishes this from productivity measures like ‘yield’ or ‘output per worker’ which only consider one input). It is clear from the growing importance of the green segments in Figure 2 that TFP has been accounting for more and more of global farm output growth. Keith Fuglie argues that agricultural growth is now largely ‘knowledge-driven’ based on the increasing role of TFP (Fuglie, 2018). What is the link between TFP and knowledge? This is something we have studied over the past decade and our findings suggest that most TFP growth in US agriculture can be traced back to public investments in research and development at places like Purdue University, other Land Grant institutions and USDA’s Agricultural Research Service. 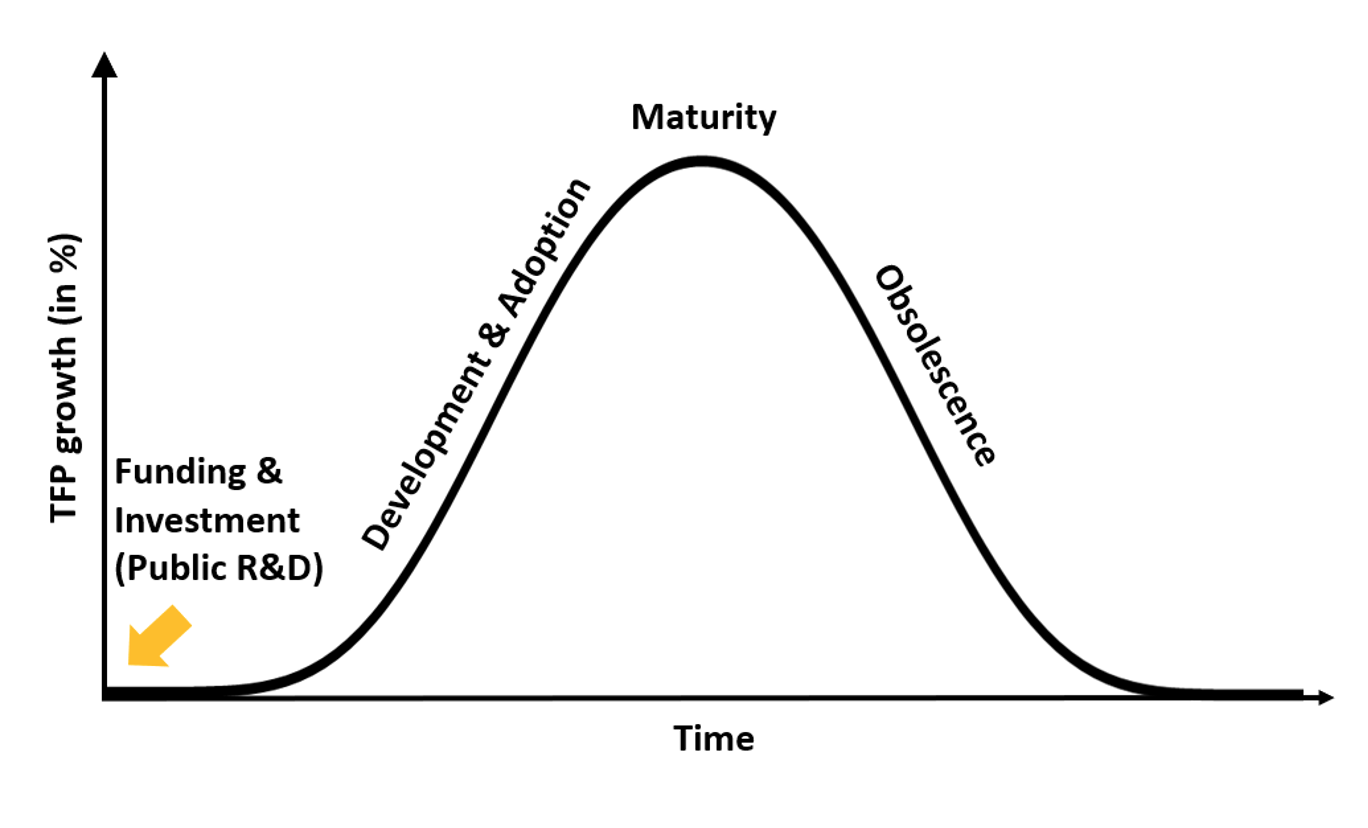 Our work found a lag between public investments in ‘knowledge capital’ and the realized benefits from higher TFP, with as much as 50 years passing from the initial investment (Baldos et al., 2019). Figure 3 portrays this life cycle in which the early years show relatively little payoff as new technologies are developed. TFP benefits must await on-farm adoption of these technologies. Based on our analysis of US data over the 20th century, we find that TFP gains peak at about 22 years, after which obsolescence gradually sets in. Of course, in the case of some technologies, the lag between innovation and maturity can be much longer. For example, it took fifty years from the discovery of Bacillus thruingiensis (Bt) until it was registered as a control agent in crop production. Another half-century passed before it was ultimately approved for widespread use in corn production (Pardey & Beddow, 2013).

How will Climate Change alter Productivity Growth in Agriculture?

Given the importance of TFP in fueling agricultural output growth, we are left wondering how this key driver might be influenced by climate change. This topic has received very little attention to date. Keith Fuglie argues there are two ways in which this is likely to happen. Firstly, climate change is likely to accelerate the speed of knowledge capital obsolescence. Discoveries that are relevant to Indiana corn production may no longer be relevant in a world in which summer temperatures regularly exceed 95 degrees and precipitation is concentrated in fewer, more extreme events.

The second mechanism by which climate change might affect the TFP engine of agricultural growth is a reduction in the number of yield-enhancing improvements for any given crop. Plant breeders often discuss the challenge of developing drought tolerant varieties of corn that also provide competitive yields in a year in which soil moisture is plentiful. With droughts – and flooding – likely more frequent under future climate, the challenges facing plant breeders are significant. This hypothesis is supported by a recent statistical study by Ortiz-Bobea et al., 2018. They studied TFP growth in the US over the last half of the 20th century and find corn and soy productivity improvements significantly slowed by climate change – particularly summer heat stress.

Where does this leave us? The first take-away from this discussion is that we need to be much more holistic in thinking about climate impacts in agriculture. Simply focusing on crop yields for the major staples could be misleading when planning for a future with warmer temperatures, higher humidity and increasing unpredictability of rainfall. Also, given the fact that US agriculture – indeed farming worldwide—is now largely knowledge-driven, we need to think about strategic investments in research and development that can accelerate innovations throughout the food system that  make it more resilient to the effects of the inevitable climate change that is already baked into our current economic and earth systems. In light of the long lag between public R&D spending and on-farm productivity gains, we must be planning today for the adaptations that will be required at mid-century.

We know the economy will recover in 2021. Everything else is uncertain. How fast will we get the pandemic under control? How fast will consumers regain their confidence? Will Congress pass another aid bill? Professor Larry DeBoer takes a leap into the unknown, with a general economic outlook.

There are number of signs of optimism for farmland prices in 2021, yet continued economic uncertainty remains. Cash rental rates are likely to see upward pressure despite recent low or negative returns on rented land.

Trade Policy Outlook: What should we expect from a Biden Administration?

U.S. international trade policy played a surprisingly small role in the presidential election campaign. What changes to trade policy should we expect from President-elect Biden?

By joining this mailing list, you agree to receive an email when a new publication is released. This mailing list is kept solely for the purpose of sharing the report and is not used for any other purposes.