USDA’s October Cattle on Feed report, released on Friday, October 25th, indicated that the nation’s on feed inventory of 11.3 million head was about 1% smaller than a year ago, but still more than 4% larger than two years ago. Although the total number of cattle on feed was smaller than a year earlier, there were more females on feed as the number of heifers on feed was up just over 2% compared to October 2018. 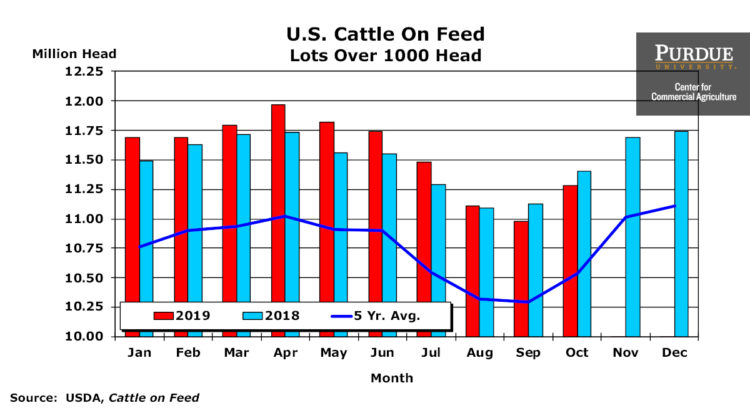 Net placements (gross placements minus other disappearance) of cattle on feed rose 2% above a year earlier during September, but were nearly 3% smaller than two years ago. Feeders backed away from placing both very heavy weight feeders and very light weight feeders on feed in September as placements of cattle weighing over 800 pounds and those weighing less than 600 pounds declined about 1%, both compared to September 2018. Instead, cattle feeders focused their efforts on placing cattle weighing between 600-699 pounds and 700-799 pounds as placements in both of those weight categories rose more than 7% compared to a year earlier.

Year-to-date U.S. cattle slaughter in 2019 has been 1.4% larger than in 2018 but at the same time dressed cattle weights averaged nearly 1% below a year ago, which held the year-to-year increase in U.S. beef production to just 0.5%. When the effects of international trade (both imports and exports) are included, beef supplies facing U.S. consumers so far in 2019 have been almost 1% larger than during 2018 as exports this year have fallen below those of 2018.

Although it does not appear that any significant cattle herd liquidation has begun, it’s become increasingly clear that expansion of the U.S herd has ground to a halt. An examination of cattle slaughter data through mid-October indicates that female slaughter (cow plus heifer slaughter) expressed as a percentage of steer slaughter rose to nearly 97% in 2019 vs. just 90% in the year ago period. Female slaughter that high relative to steer slaughter indicates cow-calf producers have put aside any intentions to expand their herds and, in some cases, might actually be reducing their herd size. The female-to-steer slaughter ratio is also consistent with the year-to-year increase in the inventory of females on feed in commercial feedyards, providing further evidence that the January 1, 2020 all cattle and calves inventory will either be equal to or, perhaps, slightly smaller than the 2019 inventory.

Choice boxed beef prices this year have averaged $222/cwt. compared to $214 in 2018, while Select box prices averaged $206/cwt. compared to $203 in 2018. Although the Choice-Select spread tends to widen seasonally as we move into fall, the spread this year has been unusually wide, averaging over $26/cwt. in October 2019 vs. less than $12 a year earlier. Prices for slaughter steers so far this year have averaged about $116/cwt. in the Southern Plains, less than $1/cwt. below the same period in 2018. Recent fed steer prices have also been weaker than a year earlier, trading in the $108-109 range compared to $111 in early October 2018. 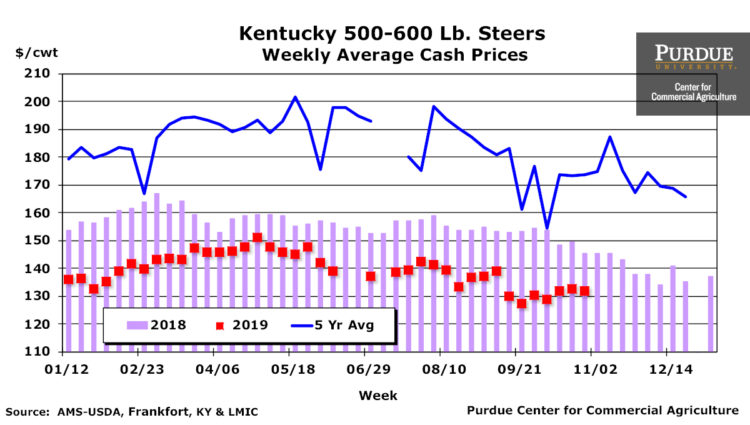 Cattle feeders have struggled since this past spring as large losses have mounted in the cattle feeding sector. Iowa State data simulating returns to a traditional yearling feeding program that does not engage in an active price risk management program indicates feeders have been losing substantial sums since late spring with losses exceeding $200 per head in September. Losses in the feeding sector have put downward pressure on calf and feeder prices this fall.

What lies ahead? Per capita beef supplies are expected to be flat compared to a year ago this fall, leading to a fourth quarter 2019 fed steer average in the Southern Plains near last year’s average of $117/cwt. Calf and feeder prices in the Eastern Corn Belt are likely to trade sideways from recent levels. Prices for light weight feeders have struggled to maintain a premium over heavier weight feeders as cattle feeders’ bids for light weight steers and heifers reflect concerns over increases in corn prices combined with the risk of poor feeding performance given cold, wet weather in the Plains and portions of the Western Corn Belt. 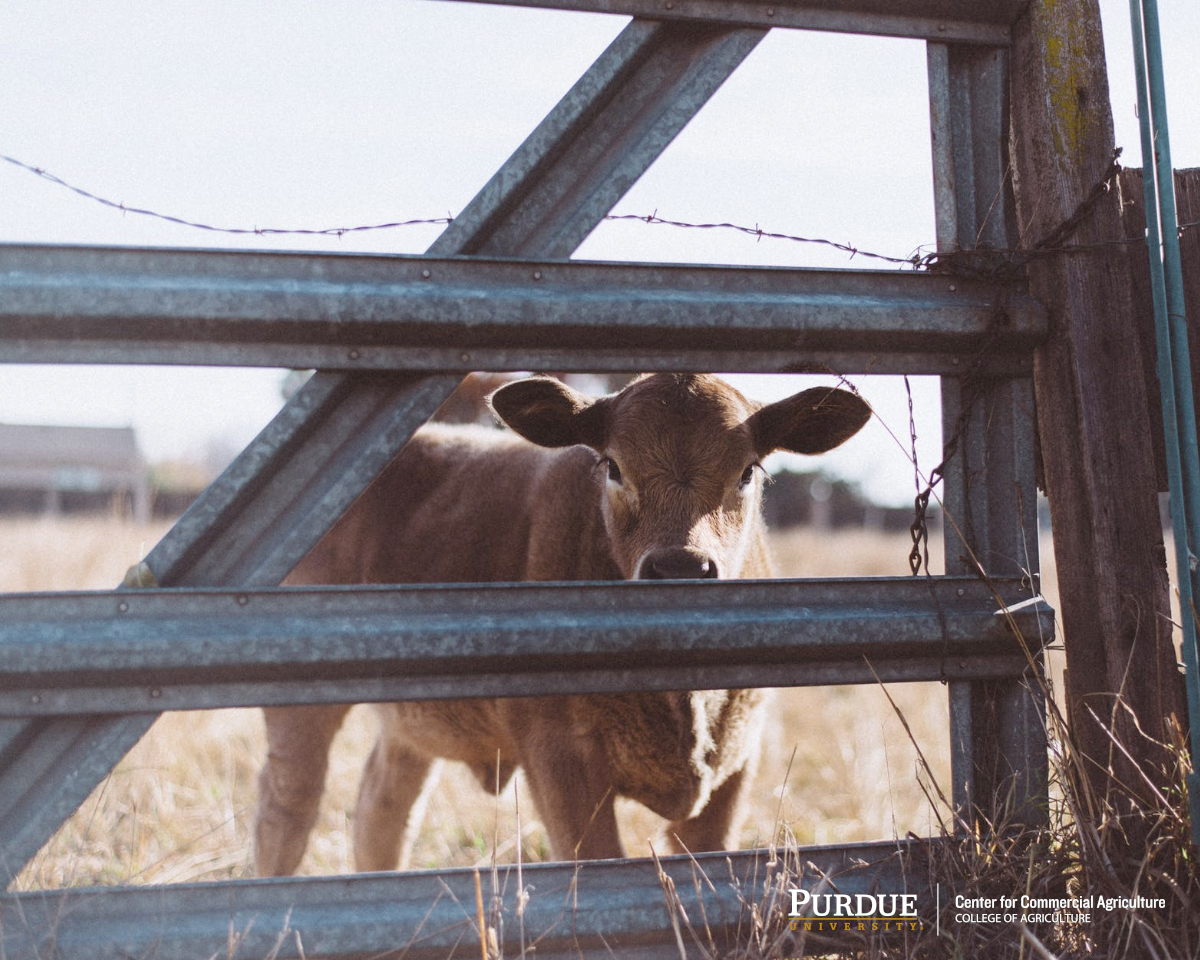