Historical Indiana Farmland Values & Cash Rental Rates can be accessed in our archive. These published in the Purdue Agricultural Economics Report each summer and date back to 1974.

by Todd Kuethe and Craig Dobbins

The COVID-19 pandemic will be the defining economic event of 2020. As documented in the previous Purdue Agricultural Economics Report, the pandemic has had a profound impact on the Indiana food and agriculture sector. Land is the farm sector’s largest input, and as a result, farmland values generally reflect broad trends in the costs and returns of agricultural production. The 2020 Purdue Land Values and Cash Rents Survey suggests that farmland prices across the State generally improved on a year-to-year basis. However, the survey suggests that these gains primarily occurred between June and December 2019, and since December, farmland prices have declined modestly. Survey respondents expect these recent declines to continue throughout the remainder of 2020 and expressed concern over the long-run impacts of COVID-19 on Indiana farmland markets.

One survey respondent stated, “Fear of long-term COVID-19 market impacts are real among Southeast Indiana farmers. Despite good economic conditions prior to March 2020, with other factors (trade, policy, etc.), there is little optimism.” However, at least one respondent reported “land prices high during this COVID-19 pandemic, at levels not seen for several years, which was not expected.” While another stated that “sales in March were higher than we expected them to be, but due to the pandemic, we feel like they have decreased to levels similar to last year.” 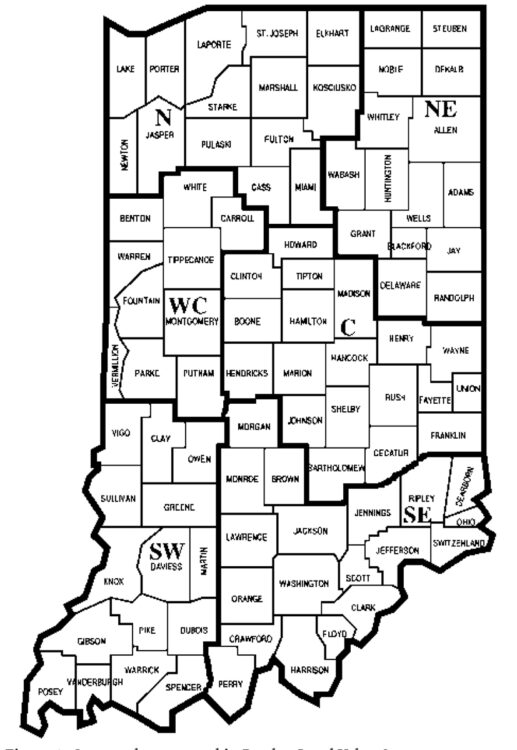 Consistent with historical experience, the highest per acre farmland values were in the West Central region. Top, average, and poor quality farmland values in the West Central region were $9,308, $8,121, and $6,707 per acre, respectively. The least expensive farmland continues to be in the Southeast region with top, average, and poor quality land having values of $6,069, $4,884, and $3,653 per acre, respectively. 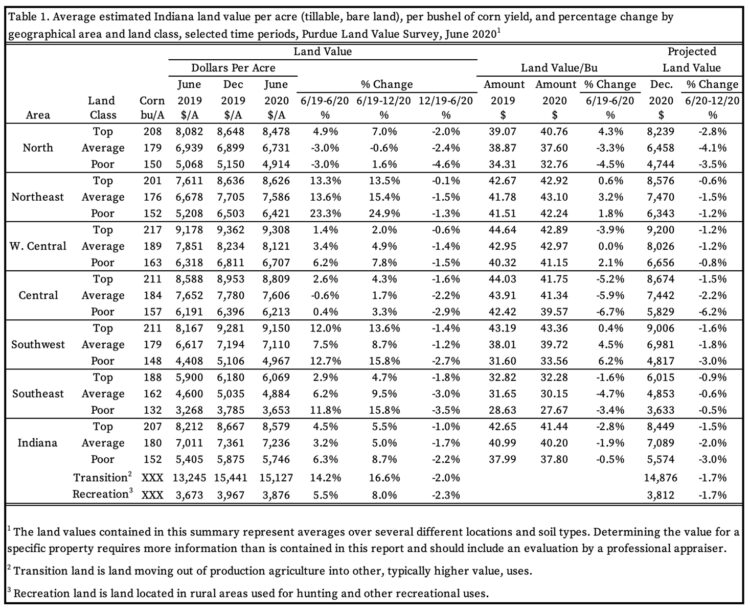 In addition, Table 1 reports the average per acre farmland value divided by respondents’ long-term corn yield estimate. This measure captures the value or cost of farmland per unit of productivity (per bushel of corn). Based on this measure of cost, the highest price farmland is top quality farmland in the Southwest region at $43.36 per bushel. This was closely followed by the Northeast region, where price per bushel ranged from $42.24 to $43.10 per bushel.

To gauge expectations for the remainder of 2020, respondents provide farmland projections for December 2020. Respondents appear to generally expect the declines of the first half of the year to continue at a modest pace. Statewide land values are expected to recede by 1.5%, 2.0%, and 3.0% for top, average, and poor quality land, respectively. At a regional level, the most pronounced expected declines include average quality land in the North region (-4.1%) and poor quality land in the North (-3.5%), Central (-6.2%), and Southwest (-3.0%) regions.

An important influence on farm real estate markets is the transition of farmland to nonagricultural commercial or residential uses. For example, one 2020 respondent noted that local farmland prices were supported by “huge increases in 1031” exchange funds. As a result, the survey collects information about the price of land moving out of agricultural production. The statewide average value of transitional land was $15,127 per acre, a 14.2% increase from the previous June. Recreational land values also increased from $3,673 per acre in June 2019 to $3,876 per acre in June 2020, an increase of 5.5%. Like farmland, transitional and recreational land values increased between June and December 2019 and declined between December 2019 and June 2020.

The survey also collects information on the value of farmland moving into rural residences and subdivisions. Respondents provide estimates of the value of rural home sites located on a blacktop or well-maintained gravel road with no accessible gas line or city utilities. These markets are characterized by a very wide range of values. As a result, results are summarized by median values (the value dividing a series of ordered numbers in half ). As shown in Table 2, the median value for five-acre home sites was $10,000 per acre for North, Northeast, and Southeast regions. The median values were a bit higher in the West Central ($11,500), Central ($12,000), and Southwest ($12,500) regions. The median value of $10,000 per acre also holds for ten-acre home sites in all regions except Northeast ($12,000) and Southeast ($8,000). 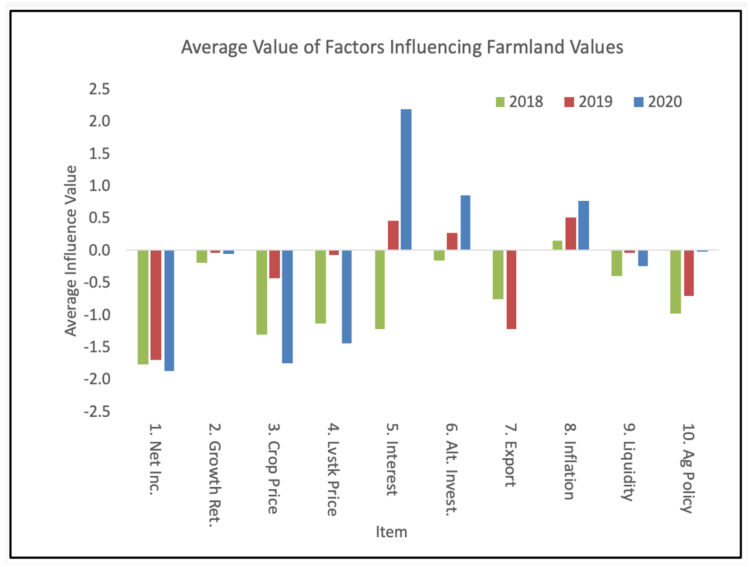 For 2020, there are three positive influences: interest rates, returns from alternative investments, and inflation. Each of these factors were also positive in 2019, yet the results suggest that they have increased in importance. The most notable positive influence is current and expected interest rates. For example, one respondent strongly stated, “At this point in time, the price of corn is immaterial, it’s all about interest rates.” Since June 2019, the Federal Reserve’s Open Market Committee reduced the Federal Funds (overnight deposit) rate several times. These rate cuts include the emergency measures to limit the adverse effects of the COVID-19 Pandemic, and current interest rates are once again at historic lows. Low interest rates place positive pressure on farmland values by reducing the cost of potential borrowers. 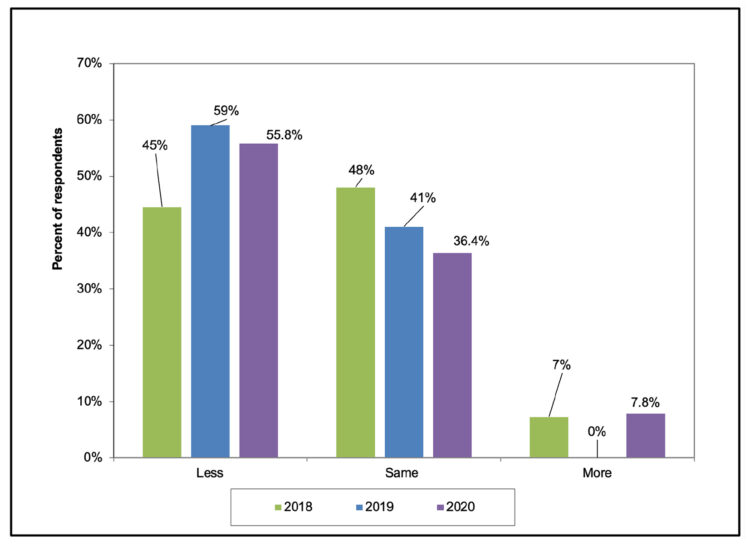 Figure 3. Percentage of respondents indicating less, same, or more farmland on the market than in the previous June

It is also important to note that farmers still appear to be the primary purchasers of farmland. The 2020 survey suggests farmers purchased 65.4% of land sold. Non-farm investors were the next largest purchaser, at 20.1%, followed by developers and institutional investors at 8.1% and 5.3%, respectively.

Respondents were asked to forecast the five-year average corn price, soybean price, mortgage rate, inflation rate, and finally the change in farmland value. The price and rate information for the past five years are presented in Table 3. 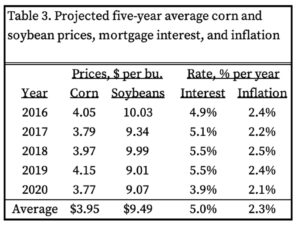 Given the current economic downturn and prospects for a potential recovery, it is not surprising that respondents expect interest rates to decline to 3.9%.
This is the lowest expected rate in the last five years by a wide margin. However, respondents’ expectations for inflation is only slightly lower than previous years at 2.1%.

Where do respondents expect farmland to be in five years given these projections? Not surprisingly, respondents provided a wide range of expectations. The 2020 survey asked respondents to predict the total change in farmland prices between June 2020 and five years from now. The average response was a modest 3.44% increase. This suggests an increase that just outpaces expected inflation, which is consistent with historic farmland growth rates.

Statewide cash rental rates increased across all land quality classes in 2020. The largest increase was in low quality land which increased by 5.4% to $175 per acre. This was followed by a 4.8% and 4.0% increase in average and top quality land, respectively. The rental rate increases offset the reduction in rents that occurred between 2018 and 2019.

Statewide, cash rent as percent of land value remains 3% (Table 4 and Figure 4). This relationship has held relatively constant since the recent peak in farmland values in 2014, following a long decline from 1985 through 2014 (Figure 4). Although the ratio between cash rent and land value varies by region and land quality, the variation is tightly clustered around 3.0%. 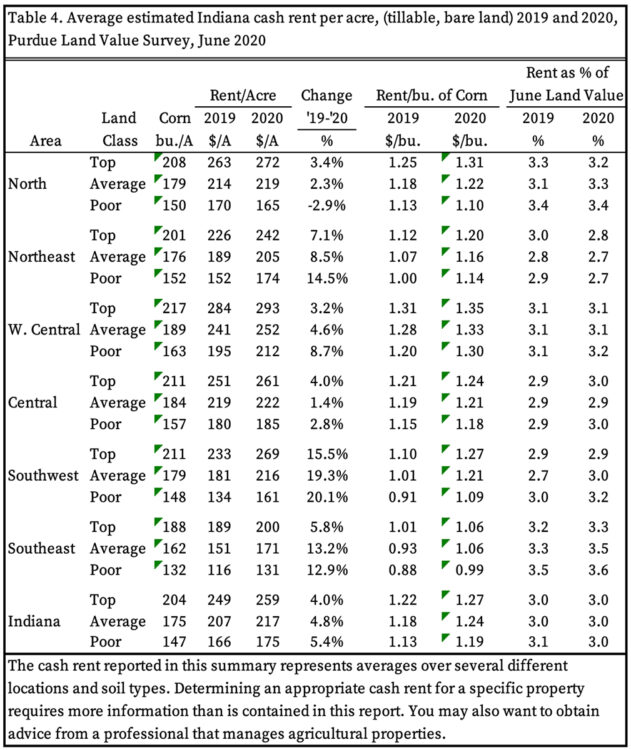 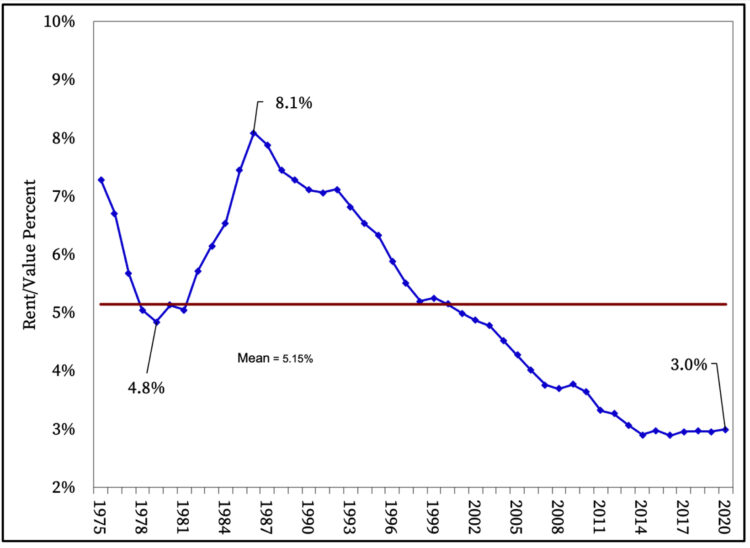 Statewide farmland values sit just below the historic peak of 2014, and on a year-to-year basis, values exhibited their largest gain since June 2013-2014. However, farmland prices have declined slightly since December, which may reflect changes in broader economic conditions related to the COVID-19 pandemic. As mentioned previously, many survey respondents emphasized the uncertainty related to the current COVID-19 pandemic. Given the disruptions across the food value chain and deep economic uncertainty, it is difficult to posit what the next year has in store for Indiana farmland market. The COVID-19 pandemic is a global phenomenon which will likely continue to disrupt trade patterns and income flows around the world. Everyone is hoping for a quick economic recovery, but as one respondent stated succinctly, “who knows what COVID-19 will do to the land selling price.”

These professionals provide an estimate of the market value for bare poor, average, and top quality farmland in December 2019, June 2020, and a forecast value for December 2020. To assess productivity of the farmland, respondents provide an estimate of long-term corn yield for top, average, and poor productivity farmland. Respondents also provide a market value estimate for land transitioning out of agriculture and recreational land.

The data reported here provide general guidelines regarding farmland values and cash rent. To obtain a more precise value for an individual tract, contact a professional appraiser or farm manager that has a good understanding of the local situation. Prior reports are located at: https://ag.purdue.edu/commercialag/home/keyword/purdue-farmland-value-survey/. 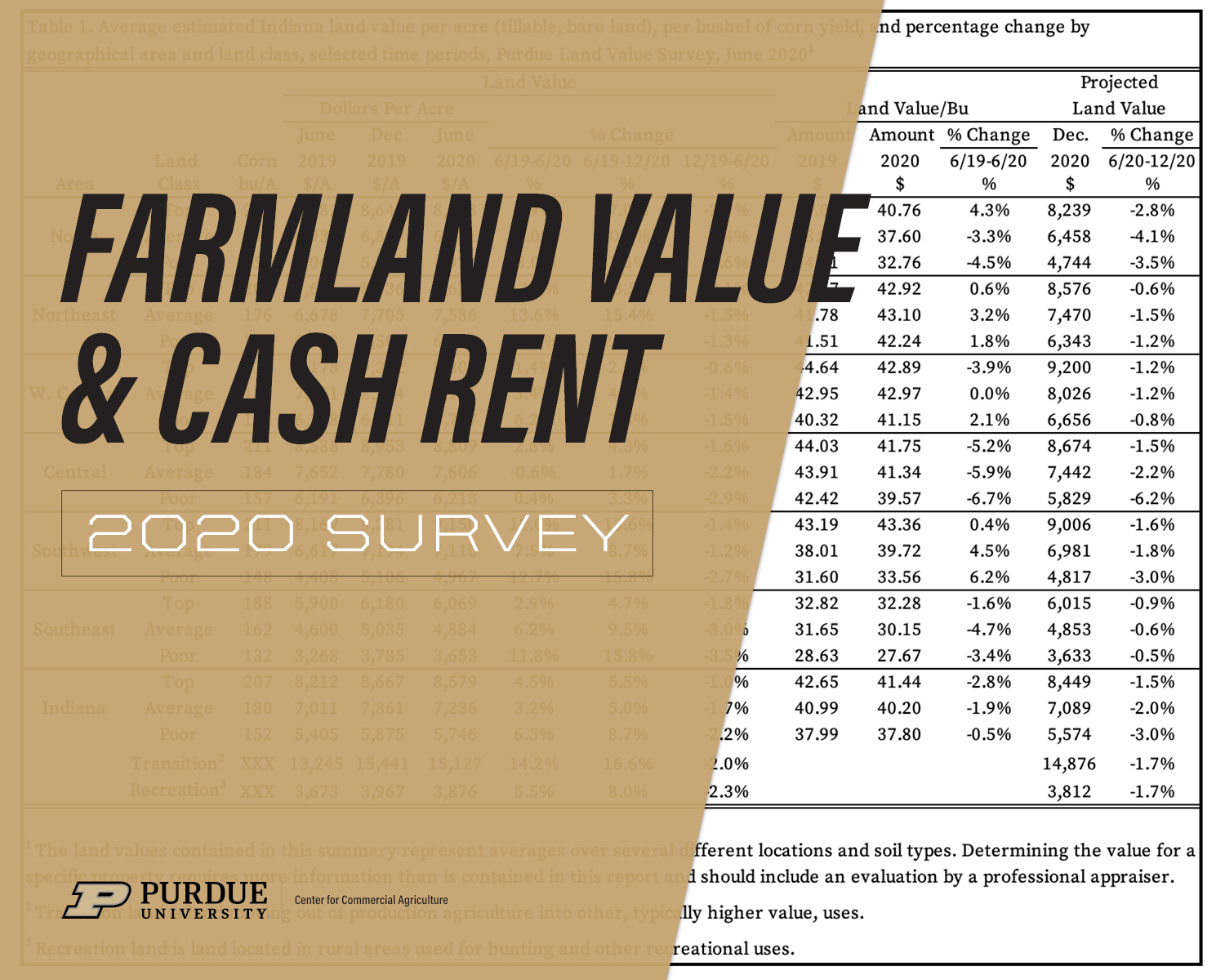 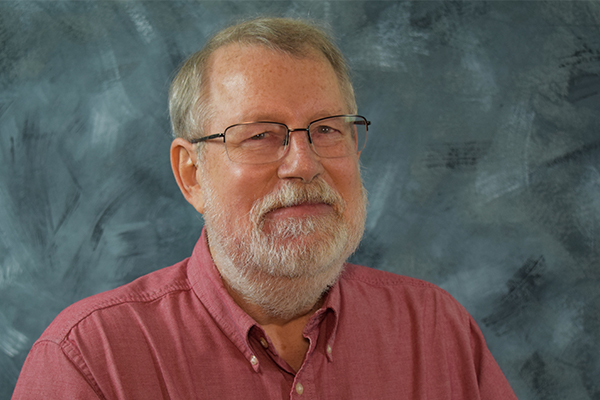 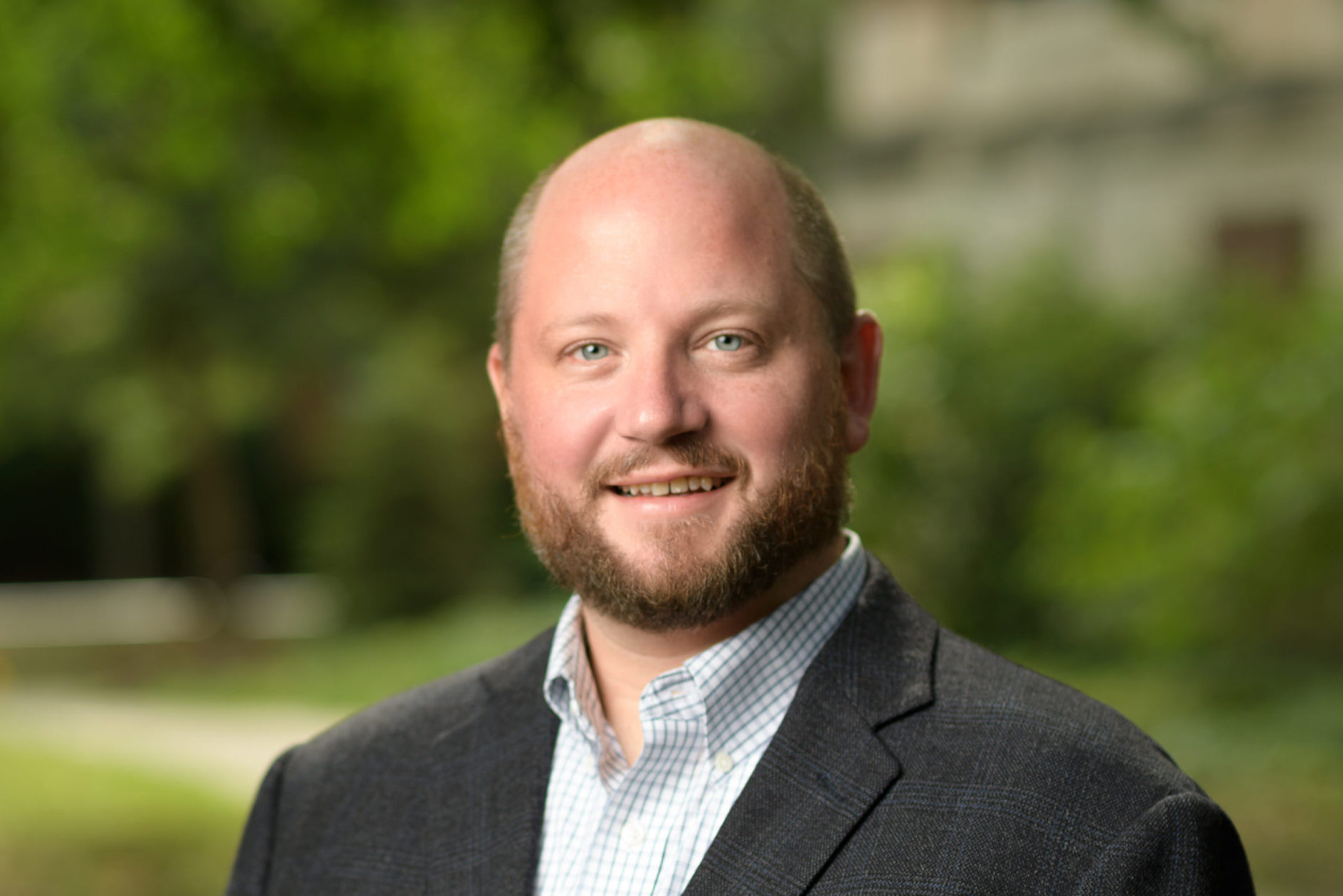 Purdue’s Brady Brewer was joined by R.D. Schrader, President of Schrader Real Estate and Auction Co., and Howard Halderman, President and CEO of Halderman Real Estate and Farm Management at the 2023 Purdue Top Farmer Conference to discuss land values. In this episode, Brewer, Schrader and Halderman give insights into what is in store for the farmland market, how interest rates may impact farmland markets, and the impact of institutional buyers.