Corn price futures for the July 2022 contract (December 2022 contract) increased from $6.00 per bushel ($5.55 per bushel) in early January to $7.75 ($7.30) in mid-April. Moreover, using the iFarm price distribution tool there was a 25 percent chance on April 26 that the expiration price for the December corn futures contract will be below $6.05 per bushel and a 25 percent chance that price will be above $8.55. Given that the U.S. stocks to use ratio is currently only 9.6 percent and continued questions related to U.S. corn acreage in 2022, there is tremendous uncertainty regarding corn prices for the rest of this year. To address this uncertainty, this article examines the impact of relatively high corn prices on feeding cost of gain and net returns for cattle finishing. 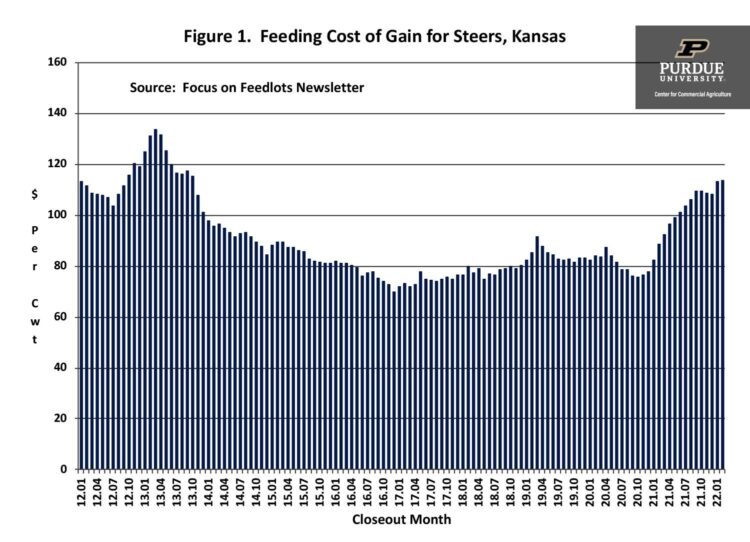 Monthly cattle finishing net returns from January 2012 to February 2022 are illustrated in figure 2. It is important to note that net returns were computed using closeout months rather than placement months. Several data sources were used to compute net returns. Average daily gain, feed conversion, days on feed, in weight, out weight, and feeding cost of gain were obtained from the Focus on Feedlots newsletter, feeder cattle and fed cattle prices from the Livestock Marketing Information Center, and interest rates from the Federal Reserve Bank of Kansas City.
After a profitable run in the fourth quarter of 2021 and the first quarter of 2022, net returns have headed southward. Average losses for the second quarter of 2022 are expected to range from $10 to $50. If feeding cost of gain remains at levels noted above, losses are expected to continue for the rest of 2022. 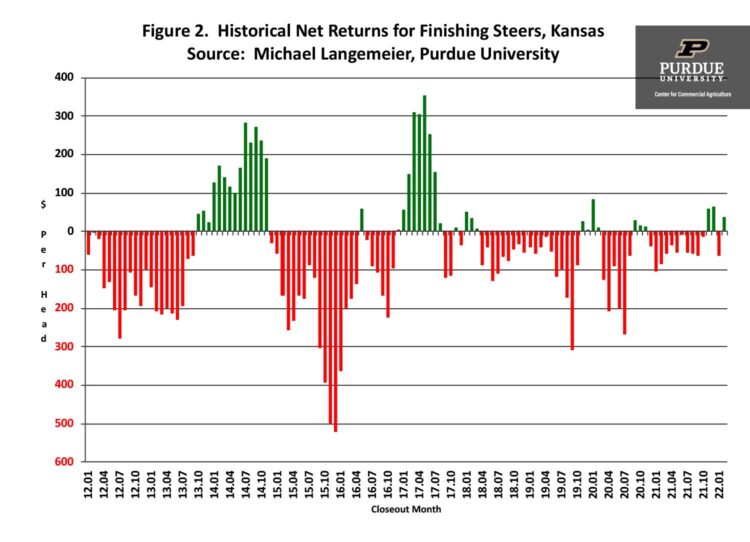 As noted above, there is currently more than a $2 per bushel difference between the December corn futures price at expiration at the lower and upper 25 percentiles. The projections above used the middle range of corn prices. For example, the average corn price for July closeouts was projected to be $7.25. If corn price was $1 lower ($1 higher), feeding cost of gain would be $109.55 ($126.75) rather than $118.15.

Corn prices have increased steadily so far this year and are expected to be quite volatile for the rest of the year. This article examined the impact of higher corn prices on feeding cost of gain and net returns for cattle finishing. Each $0.10 increase in corn prices results in an increase in feeding cost of gain of $0.86 per cwt. and a reduction in cattle finishing net returns of $2.70 per head.

This article discussed recent trends in feed costs for laying hens.  Current projections suggest that feed costs for 2023 will be slightly lower than those experienced in 2022.