Jim Andrew, Andrew Farms, Inc.: One of the discussions in Washington last week was the renewal of the food versus fuel debate –the cattlemen and livestock producers’ concern about the value or price of corn and soybeans. One of the solutions being bantered about is reduction of the Renewable Fuel Standard, which would very much point to land prices perhaps being brought down. Do you really think the people who are making these decisions are aware of the impact it could have on the capitalization of land?

Brent Gloy: No, I don’t. [laughter] I’ll be honest on that one. Although I think some of the people who make the decisions do, some of the people who talk about them haven’t thought through all the ramifications. It’s clear part of the story to this demand growth has been biofuels. If you take a chink out of that, it would change the situation. It might change the story on farmland valuation, as well. This food versus fuel versus(I always say) pheasants versus whatever it is –food in China versus food in the United States. You can concoct all sorts of crazy things. Life is about tradeoffs. As an economist, we understand that, but we have a very hard time explaining that to the rest of the world. I don’t know where all of that will go, but it would be bearish to farmland if the mandate were monkeyed with –“monkeying” being a technical term. [laughter] Surely, I’ve offended somebody.

Brent Gloy: I want to be very clear. I am not saying it’s not appropriate. The historical evidence for a 30 multiple on farmland to last very long is –we don’t have any. Maybe we are in a new era and we will stay at very, very low interest rates forever. I am giving you my opinion that I don’t know how long that can be sustained.

I would never want to try to predict interest rates, because people have been saying, “Look, they can only go up.”

If you had made that bet, you would have lost a fortune in the last several years, betting against interest rates falling further. Can it persist? Yes, it could. I don’t know. That comes down to your view of the market. As I say in the paper I wrote for Jason, the market is the ultimate arbitrator –your opinions and the guy who was bidding on the farm against me opinion. The market will sort it out and figure out who is right. Clearly, the low interest rates are having an impact on farmland values.

______________: Thank you. Can you touch on world values for farmland, just outside of the United States? Obviously the cap rates for U.S. farmland have been declining. In Brazil, Australia, and other farmland regions, is this a global phenomenon we’re seeing or how does the United States stack up relative to other countries?

Brent Gloy: I can’t comment. I wish I could, but I don’t have the data or haven’t looked at the data for other countries to be able to accurately comment on that. I have some suspicions, but I don’t want to offer those without any kind of analysis. Sorry. I do hear rumors of people now saying cap rates are falling in other places too, but maybe not quite as low as they are here.

____________: You defined the bubble ultimately with Buffett and Schiller talking about expectations of people who are taking actions that are inconsistent with the fundamentals. You gave us two red flags: The return on assets was a red flag and also the disconnect between the perceptions of corn prices that drove the rents and the farmland values. But there wasn’t a very strong correlation with low interest rates. Would that not lead you to the conclusion that was probably because people’s perception is disconnected from the fundamentals and they are relying upon increased profit, which would assume you would have to have even lower interest rates?

Brent Gloy: I’m not totally sure I’ve tracked the question, but to reiterate what I’m saying is there is some evidence that perceptions may not line up, once you get more than one degree of separation from fundamentals. Clearly, though, you have to balance all this stuff with interest rates. That is partly reflected in the multiples of what people are paying or the low capitalization rates.

If I didn’t answer your question, I may have to try that one at the break. Jason, unless you can ….

Jason Henderson: Let’s rephrase a little bit. What would it take to keep that multiple above 25?

Brent Gloy: How do you get a multiple above 25? You have real income growth and low interest rates. Real incomes in the farm sector can continue to grow. How would they grow? Demand growth exceeds supply growth. That is back to that first slide where I showed supply and demand fundamentals. If you are in a situation where supply’s ability to meet regular demand growth can’t keep up, you are going to see real income growth in the farm sector. That could get us into a 30 multiple, because you grow something at 3 percent every year. You can get a really high multiple. You have to weigh that out like you think that is.

The history in agriculture, as the Ambassador just said, is pretty accurate: Real commodity prices have declined because productivity growth has outstripped the price increases. But we have been able to keep up with it for a long time. There are a lot of people who would argue fervently about this. Some think productivity growth can’t keep up with demand growth. If you are in that camp, you can end up with a 30 multiple for a long time. That’s the bet we have to make. Have we really reached that point where productivity growth is no longer sufficient? Is biotechnology stalling out or is it going to accelerate? You have to be the judge of that.

Jason Henderson: We’ll go ahead and close this session. I know Brent is going to be around here for awhile, especially since he is willing to buy farmland at $6 corn. [laughter] Thank you Brent for you remarks and the session is adjourned. 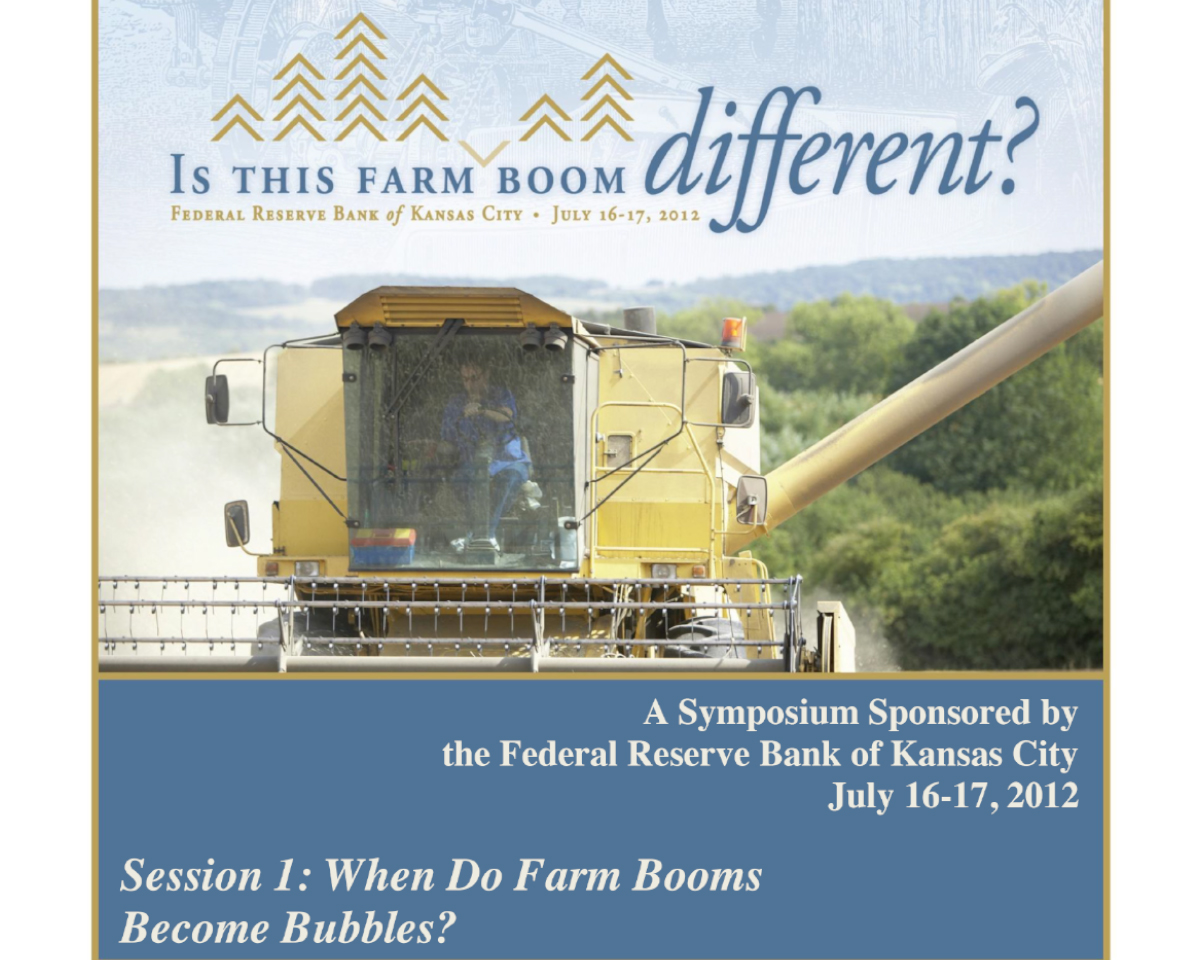 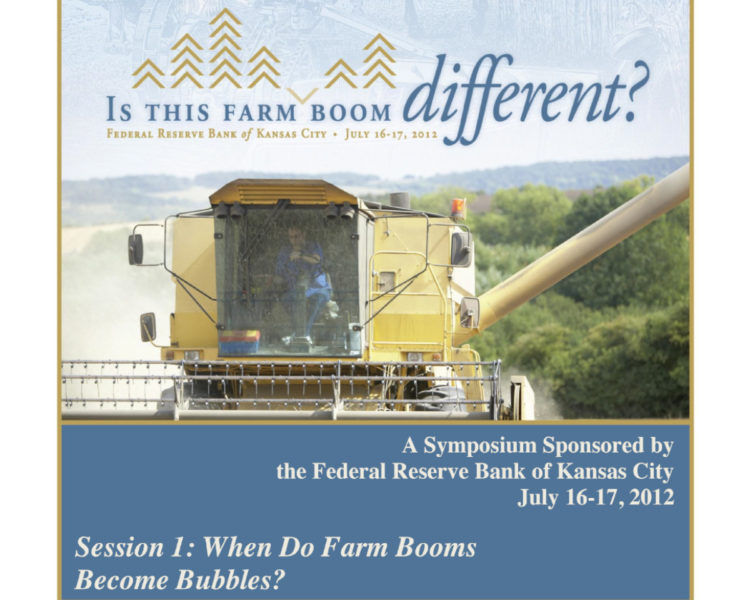 When Do Farm Booms Become Bubbles?

When Do Farm Booms Become Bubbles?

Federal Reserve Bank of Kansas City Symposium, July 16-17, 2012 – Session 1: When Do Farm Booms Become Bubbles? | Rapid increases in agricultural incomes and asset values have brought back memories of previous booms and busts. Henderson, Gloy, and Boehlje (2011) chronicled previous agricultural booms and busts noting that they have often corresponded to rapid expansions and contractions of agricultural exports.

Is This Farm Boom Different?

Federal Reserve Bank of Kansas City Symposium, July 16-17, 2012 – Conference Rapporteur: Is This Farm Boom Different? | This has been a very stimulating and informative symposium. First,I will summarize the key “take-aways” of the presentations from my perspective. Then I will make some additional observations and identify some key uncertainties that are shaping the future of agriculture–“what to watch” in these turbulent times.