It’s Not Just About Costs per Acre, Even in Tight Times

The current climate of low crop commodity prices is squeezing margins. Some margins might even be negative if crop producers continue with current costs. As a result, crop producers might focus more intensely than usual on managing costs of production. As crop producers consider strategies to reduce costs, they often budget on cost per acre. This is an excellent start – certainly better than no budgeting at all. Focusing only on total costs per acre though might cause producers to overlook important tradeoffs with respect to productivity. It would be easy to lower total costs per acre by simply reducing the amount of various inputs.

Budgeting on a cost per bushel of grain is another approach to consider. Three good reasons for budgeting on output units (rather than input units) include:

Agribusiness firms that supply inputs to producers should also consider this analysis. In conversations with producers, input suppliers should focus on productivity and costs per bushel. Understanding the impact of technologies on the production system is a great start. Communicating the influence of the technologies on costs per bushel and net returns per acre is even more valuable. This is particularly true in an environment of margin pressures and intensive price shopping.

The most straightforward reason for calculating costs on a per-bushel (rather than per acre) basis is that the crop being produced will be priced in dollars per bushel. Thus, the costs and benefits will be in the same units ($/bu) making comparison easy. Assume that corn is earning $3.50 per bushel and you have budgeted costs at $900 per acre. It is difficult to know if you are making a positive margin on each bushel of corn given that the units do not align.

Some will raise the concern that production is uncertain. It is true that without yields it is not possible to determine costs per bushel. No budget is going to perfectly predict the future. Instead, budgeting makes use of history and trends to make predictions about the future. Budgeting is based on forecasts that are imperfect but useful. Then after the future is realized, one can compare actual performance to the budget to assess accuracy and improve future budgets. One source that crop producers can use to begin forecasting yields is their actual production history (APH) from crop insurance programs.

The result of budgeting based on the costs per unit of input (dollars per acre) is that spending additional money on inputs always will appear to raise costs. Thus, a producer focused on cost control might assume that reducing expenditures would lead to improved profits. This type of analysis ignores the impact of inputs on the productivity of the operation. Some inputs increase yields more than other inputs. As a result, the higher yielding inputs are likely to cost more as well. An individual budgeting based on cost per acre might forego the more expensive input simply because it costs more. An individual budgeting based on cost per unit of output might note that spending additional money per acre actually reduces total cost per bushel because that input yields more bushels.

The Impact of Total Fixed Costs on Incremental Costs

In agricultural production a large portion of costs are fixed. That is, the cost of the input is the same regardless of how many bushels are produced. If a producer has a fixed cash rent of $295 per acre, the landowner expects $295 per acre. The landowner wants that payment regardless if 125 bushels or 295 bushels of corn are grown. The cost per acre to the producer is $295. The cost of cash rent per bushel in this example would be between $2.36 and $1 per bushel (figure 1), depending on the budgeted crop yield. Similar graphs could be drawn for other fixed costs such as machinery or labor. 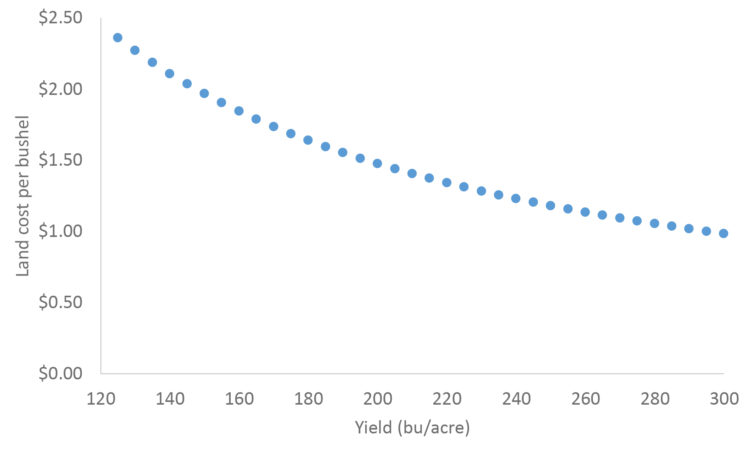 Figure 1. Land Cost per Bushel for Cash Rent of $295 per Acre

Land has historically captured about one-third of total revenues from crop production (figure 2). On land that is rented for $295 per acre and yields 186 bushels per acre, this is a per bushel cost of $1.59. If yields were to slip to 150 bushels per acre, the per bushel cost of land would be $1.97. This represents a $0.38 per bushel increase in cost. Everything else equal, the share of land costs per bushel goes from 32% to 36%. Much of the machinery and people costs are also fixed. Thus, over half of production costs are fixed in the short run, making even small reductions in yield costly on a per unit of output basis. 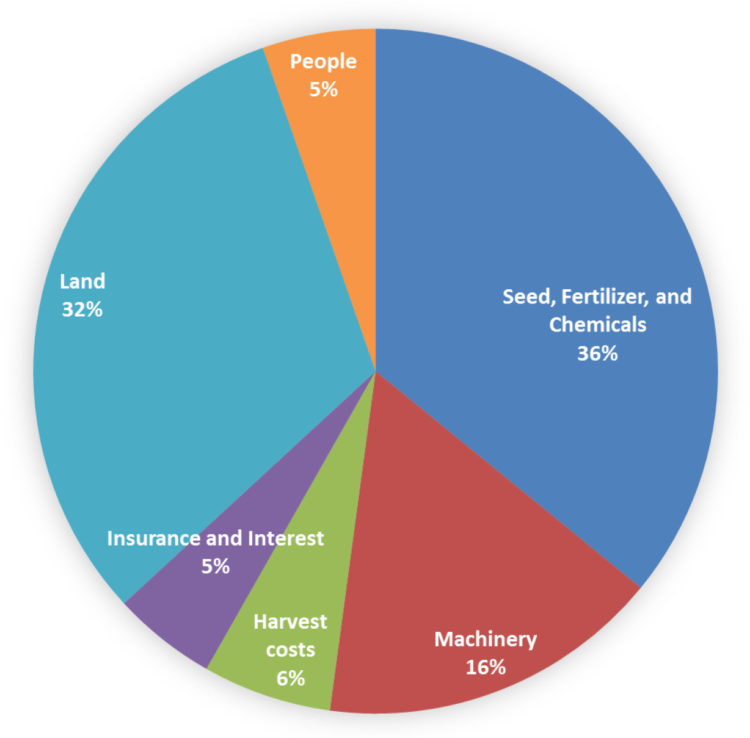 The Tradeoff between Value and Cost

Let’s use the 2015 Purdue Crop Cost and Return Guides as a baseline for analyzing the implications of one strategy to reduce costs, namely reducing the seeding rate (table 1). The baseline assumes continuous corn production on high productivity soils with 33,000 seeds per acre and yields of 186 bushels per acre. We are going to analyze the impact of reducing seeding rate to 27,000 seeds per acre (the recommended seeding rate for low productivity soils). The first column calculates the baseline per bushel costs of growing continuous corn on high producing Indiana farm ground. The second column recalculates the budget on a per bushel basis assuming seeding rate goes down, but output remains the same (186 bushels per acre). The third column illustrates the impact of yields declining to 180 bushels per acre (a 3.3% reduction) due to the reduction in seeding rate. We assumed variable costs, for example hauling and drying costs, would decline proportionally with reduced production.

The initial cost per acre of seed was $124. Reducing the seeding rate lowers costs per acre to $102. This represents a $22 savings per acre, which makes it look like an obvious decision. The story initially when considering this cost on a per bushel bases is even better. The cost per bushel produced is reduced by $0.13. Why change budgeting techniques if the story is the same?

It is unrealistic, however, to assume that changing the seeding rate would have no impact on yields. Instead, we should consider the impact of seeding rate on productivity. Of course, we don’t know for sure what the impact of the reduced seeding rate would be on corn yields. But, we can do “what if” analyses. In the analysis provided in Table 1, reducing yields by just 6 bushels per acre (3.3 percent reduction) significantly changes the results. Lowering yields from 186 bushels to 180 bushels, the cost per bushel is now $0.02 more than for the original planting rate of 33,000 seeds per acre. This result occurs, despite the fact that seed costs per bushel are lower. Most other expenses (even after accounting for reductions in some variable costs such as fertilizer, interest costs, and hauling) increase on a per bushel basis. Land, for example, has increased from $1.59 per bushel to $1.64 per bushel; offsetting more than half of the anticipated $0.09 per bushel cost savings on seed. Across all expense categories the increases in cost per bushel sum up to more than the cost savings from seed.

The important take away from this analysis is that reducing cost per acre is not the right objective. One must account for the impact on productivity from any decision that seeks to lower costs. In this example, you would need to know how much impact reducing seeding rates by 6,000 seeds per acre would impact yields. Any reduction in yields greater than 3.33% would result in an increase in cost per bushel, a need for a higher breakeven price and an increase in losses. This is a clear illustration of “needing to spend money to make money.” Similar analyses should be undertaken anytime you are trying to decide if you should switch or reduce inputs to save money.​
Print Friendly Version

Exit Strategies slidedeck presentation by Michael Langemeier given in Salem on March 25, 2022.