Farmer Use of Ag Data Software

In this era of precision agriculture and big data, farmers are increasingly pressured to adopt a farm data software platform. Companies such as Granular, Farmers Edge and Conservis allow producers to manage and analyze their data. They promise actionable insights that boost yields or reduce input costs.

The sale of The Climate Corporation, now known as Climate FieldView, to Monsanto, now Bayer, for nearly $1 billion highlights the potential value of farm data software. Investment in companies producing farm management software, sensing platforms and internet of things solutions rose 27% in 2017 and 65% in 2018, according to AgFunder News.

But despite the apparent eagerness for venture capital, little is known about the popularity of farm data services among commercial producers. To investigate this, Purdue University’s Center for Commercial Agriculture and CME Group included questions related to farm data software adoption in their April Ag Economy Barometer survey.

Surveyed farms were asked if they currently use Climate FieldView; Granular, owned by DowDuPont; Encirca, also owned by DowDuPont; Trimble; and Farmers Business Network. These five were chosen based on Google search data indicating their relative popularity among known products. 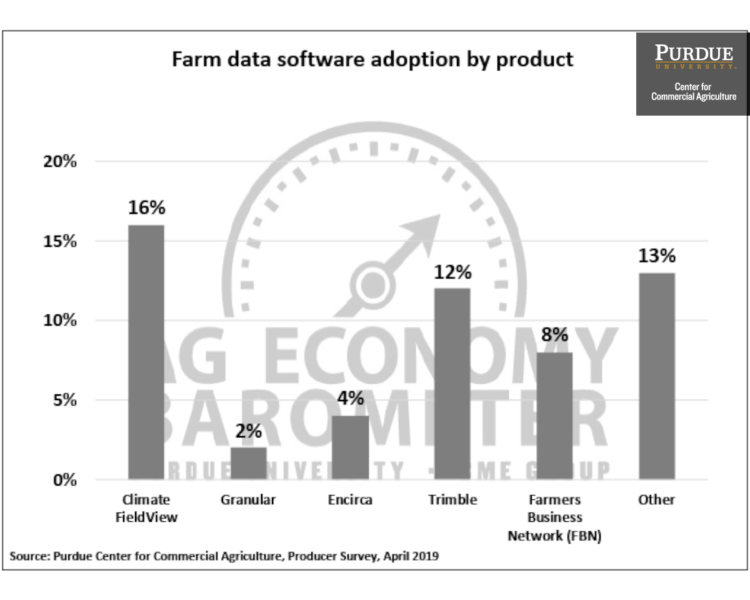 While adoption rates vary by product, 40% of surveyed farms currently use at least one type of farm data software. Climate FieldView is the most popular, at 16% of farms surveyed, followed by Trimble at 12%, FBN at 8%, Encirca at 4% and Granular at 2%. In addition, 13% of farms use a platform not specifically asked about in the survey. Of these, software used for John Deere equipment is the most common.

Of farms using any software, one-third use multiple platforms simultaneously. This suggests that software products address a variety of farm needs and may be complementary. This is particularly true for FBN, whose primary value is its “crowd-sourced” network of input cost and performance data. Among FBN subscribers, over 80% also use another farm data platform.

Data software users were asked how much they spend per year in subscription fees. Of those responding, 51% pay less than $5 per acre, 14% pay between $5 and $10 per acre, and 1% of users pay more than $10 per acre. Strikingly, one-third of users pay nothing for their farm data platforms. This reflects the “freemium” pricing model in which entry-level products are offered at no cost and fees are incurred for upgrades.

Respondents not currently using farm data software were asked to indicate their primary reason for not doing so. Of the available responses, a lack of familiarity with the technology was the most popular at 51%, while 23% of farms perceived farm data software as too expensive.

Another 21% of respondents didn’t see the value, and 4% specified “other” as to why they don’t use ag data software platforms. 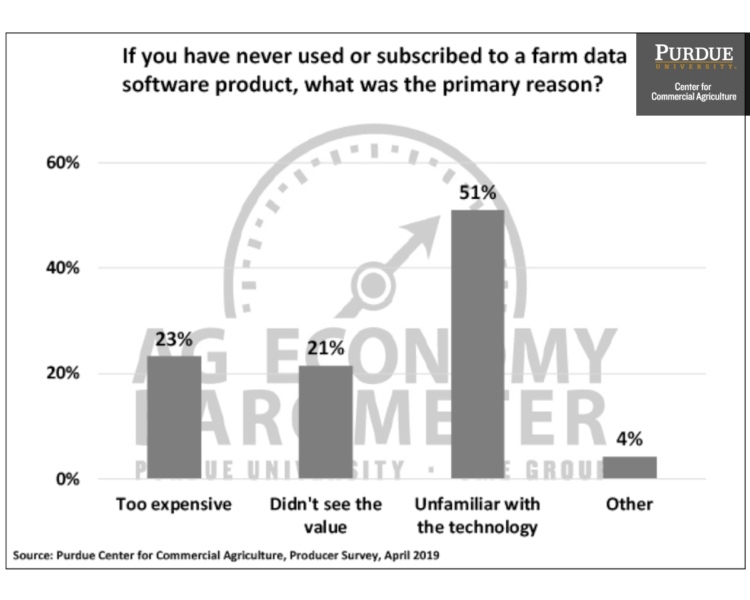 If you have never used or subscribed to a farm data software product, what was the primary reason?

All participants were asked if they had ever used but then abandoned a farm data software product. Of those who had, 40% cited cost as the primary reason for ending their subscription. About a third found that the software did not integrate well with their equipment, and 19% indicated the product was not user-friendly. 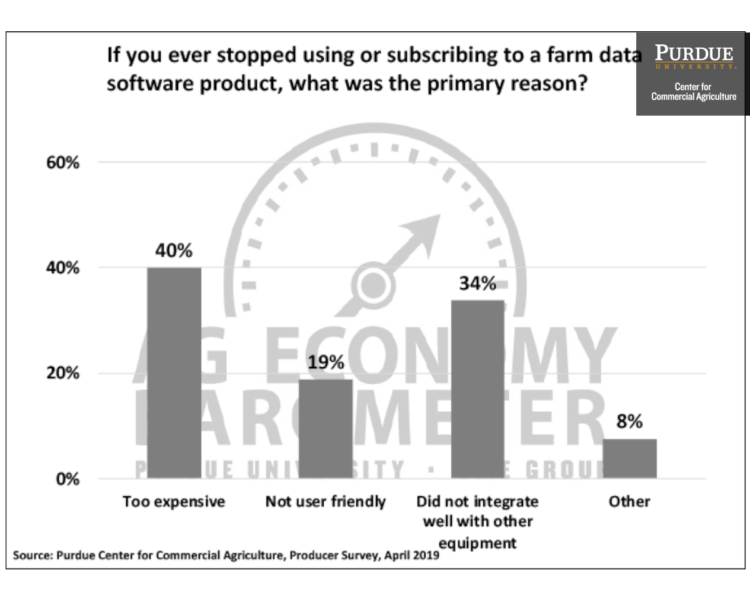 If you ever stopped using or subscribing to a farm data software product, what was the primary reason? 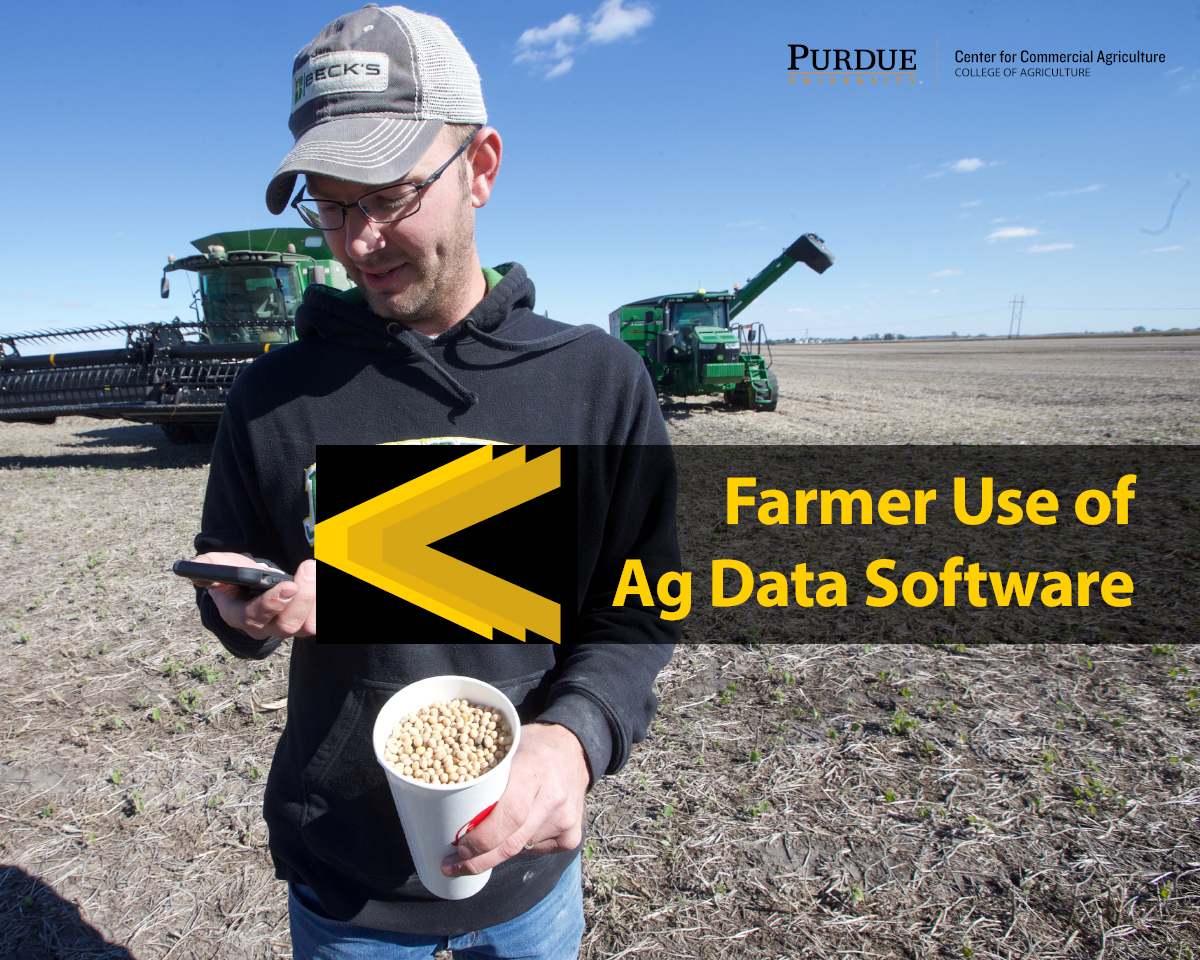 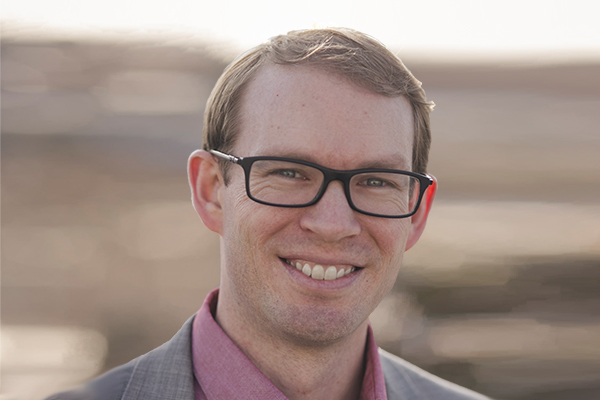 The Value of Farm Data

This survey provides a useful glimpse into the farm data lifecycle from collection to action to evaluation. We find that among large commercial corn and soybean operations, data collection is common (92% collect at least one type of farm data) and that collection is strongly related to farm characteristics.