Key performance metrics for swine production include feed conversion, litters per sow per year, pigs per litter, and pounds of pork produced per sow per year.  All of these metrics have improved dramatically over time.  Improvements in production performance are critical to controlling production costs and for the industry to remain competitive in comparison to swine producers in other countries and competing meats.  This article examines long-term trends in pigs per litter. 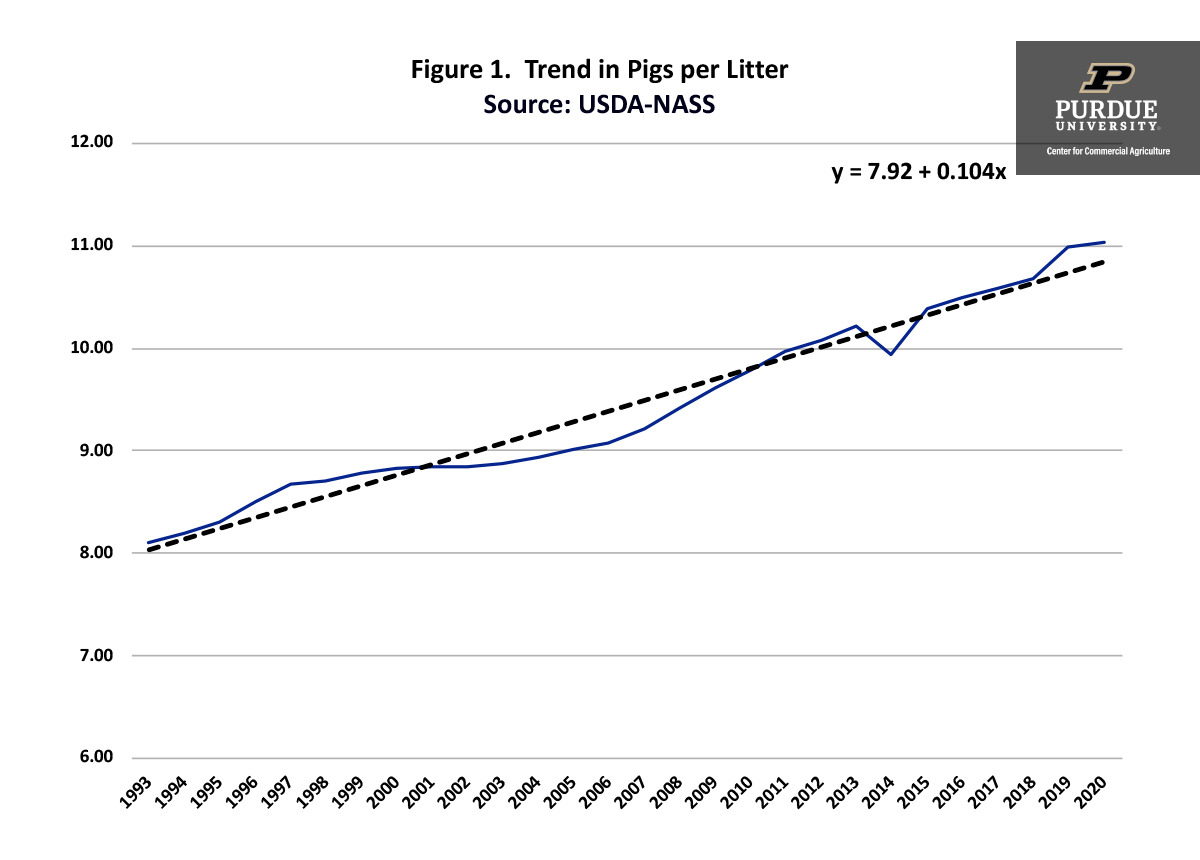 Improvements in production performance, such as litters per sow per year and pigs per litter, have impacts on the number of sows needed to supply the domestic and export markets.  Obviously, if pigs per litter had not increased over the last few decades, we would need a much larger sow herd.  In addition to production performance, the increasing market weight of barrows and gilts has impacted the size of the sow herd needed to supply our markets.  To provide some perspective on the importance of production performance and market weights, we will contrast the growth rates in sows farrowed, pig crop, and swine production in pounds (USDA-NASS).  The annual growth rate in the U.S. sow herd during the 1993 to 2020 period is only 0.02 percent, and is not significantly different from zero.  In contrast, the annual growth rate in the U.S. pig crop (1993 to 2020) and U.S. swine production (1993 to 2019) are 1.25 percent and 1.94 percent, respectively.  In 1993, the pig crop (swine production) was 97.3 million head (23.8 billion pounds).  The pig crop in 2020 was 139.4 million head, while swine production in 2019 was 40.5 billion pounds.  To summarize, we have increased U.S. swine production by 70 percent without increasing the number of sows.  In terms of per sow production, pounds produced per sow increased from 1,979 in 1993 to 3,189 in 2019.

In closing, pigs per litter has increased at a rate of 0.104 per year since 1993.  Another way of stating the same thing, the annual growth rate of pigs per litter in the U.S. was 1.10 percent from 1993 to 2020.  Continued improvements in production performance will help ensure the U.S. swine industry remains competitive.

The biggest year-over-year increase in pork shipments was to mainland China, which more than doubled in 2020. Pork exports to China during 2020 accounted for nearly 30 percent of all U.S. pork exports, up from a market share of just 14 percent in 2019.

World pork markets have been disrupted the last couple of years, first by African Swine Fever (ASF) in China followed by a U.S.-China trade dispute and then, in 2020, by the coronavirus.