by Michael Langemeier and Xiaoyi Fang

Due to continued increases in demand for certified organic grains, crop farmers that have transitioned from conventional to certified organic grains report higher net returns per acre (McBride et al., 2015; Greene et al., 2017; Greene and Vilorio, 2018; Center for Farm Financial Management, 2020).  Despite this, certified organic land accounts for less than 2 percent of U.S. farmland (U.S. Agricultural Census, 2017).  Information pertaining to the relative profitability of conventional and organic production is often lacking.  This article compares the long-run net returns to land of conventional corn/soybean and corn/soybean/wheat crop rotations to that of an organic corn/soybean/wheat rotation.  Ten-year enterprise budgets for each crop rotation were developed so that we could capture the net returns of both the transition years and organic production years for the organic crop rotation.

**A corresponding spreadsheet tool used to compare conventional and organic rotations over a ten-year horizon can be found here.

Organic crop production often involves higher manure, machinery, and labor costs, and lower fertilizer, herbicide, and insecticide costs.  Using FINBIN data for the 2014 to 2018 period, total expenses for organic production in comparison to conventional production were slightly higher for corn, and from 30 to 40 percent higher for soybeans and wheat.

Enterprise budgets were developed for conventional, transition, and organic corn, soybeans, and wheat for a ten-year period.  Conventional corn, soybean, and wheat enterprises were used to estimate net returns per acre for a corn/soybean and a corn/soybean/wheat rotation.  Transition soybeans and wheat were used along with organic corn, soybeans, and wheat to estimate net returns per acre for an organic corn/soybean/wheat rotation.  Soybeans and wheat were used as transition crops, and the transition was assumed to take place over time rather than just the first two years of the ten-year period.  The organic crop rotation was set-up to ensure that the first organic crop would be corn, which has historically been the most profitable organic crop.  More detail pertaining to the enterprise budgets can be found here.

Table 1 illustrates the crop prices that were used for year 1 and years 2 through 10.  After being lower in the first year (i.e., 2020), crop prices were assumed to stabilize and reach a long-run equilibrium.  The historical difference between conventional and organic prices was used to estimate the organic prices.  Sensitivity analysis related to organic crop price assumptions can be found below. 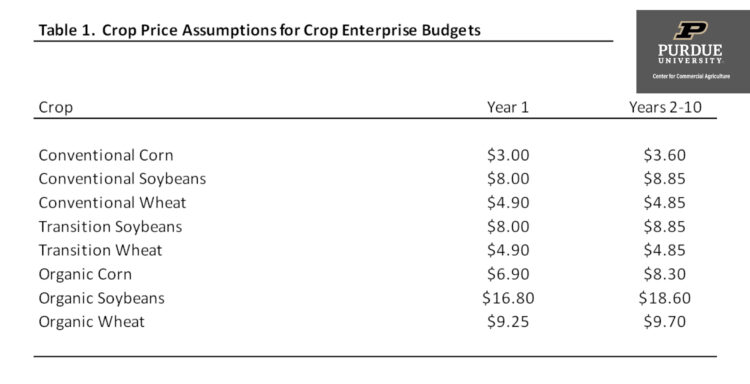 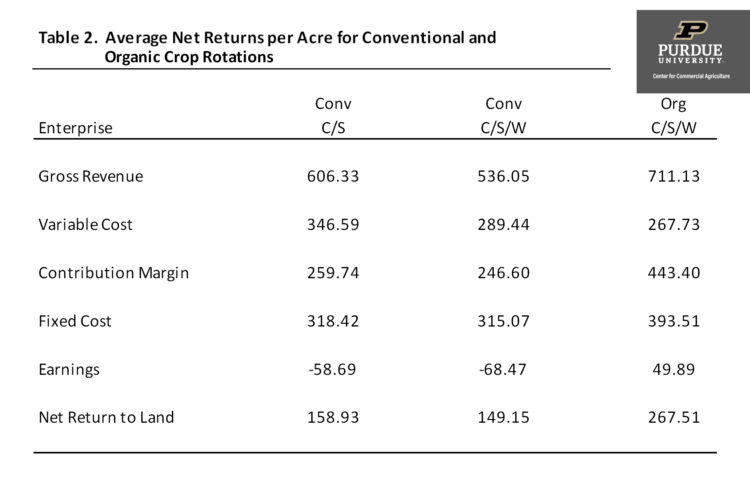 The average net returns per acre for the three crop rotations illustrated in table 2 are sensitive to changes in relative prices, relative yields, and relative costs.  The analysis in this section examines breakeven organic crop prices and breakeven organic crop yields.  Breakeven prices and yields were computed by comparing the net present value of net returns to land among the three crop rotations. 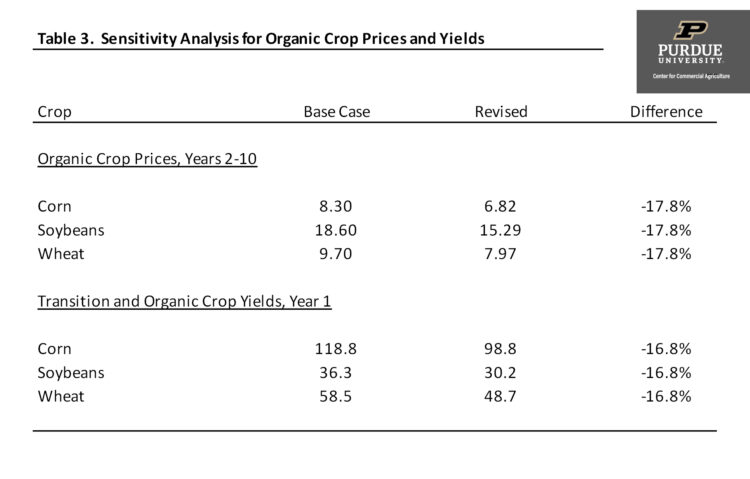 The second part of table 3 presents the transition and organic crop yields used for the base case as well as breakeven yields.  The table only shows yields for the first year.  Trend adjustments are made to project yields in Years 2 through 10, so any change in the projections for the first year will change yields for the entire ten-year period.  Holding crop prices and costs constant, transition and organic crop yields would need to decrease 16.8 percent for the average net return to land for the organic crop rotation to equal that of the conventional corn/soybean crop rotation.  To be equal to the net return to land for the conventional corn/soybean/wheat crop rotation, organic yields would need to be reduced by 18.4 percent.

This article compared the long-run net returns to land for conventional and organic crop rotations.  An analysis of this sort requires a lot of assumptions.  Producers considering transitioning a portion of their acres to certified organic crop production should carefully examine the sensitivity of net returns using alternative price, yield, and cost assumptions.  It is also important to recognize that the crops grown, manure used, and tillage practices vary substantially among organic crop farms.  Furthermore, the FINBIN data shows a much wider difference in enterprise net returns among organic crop farms than their conventional counterparts.  This wider difference is likely due to the difficulty of managing an organic crop system, and the learning curve associated with growing organic crops. 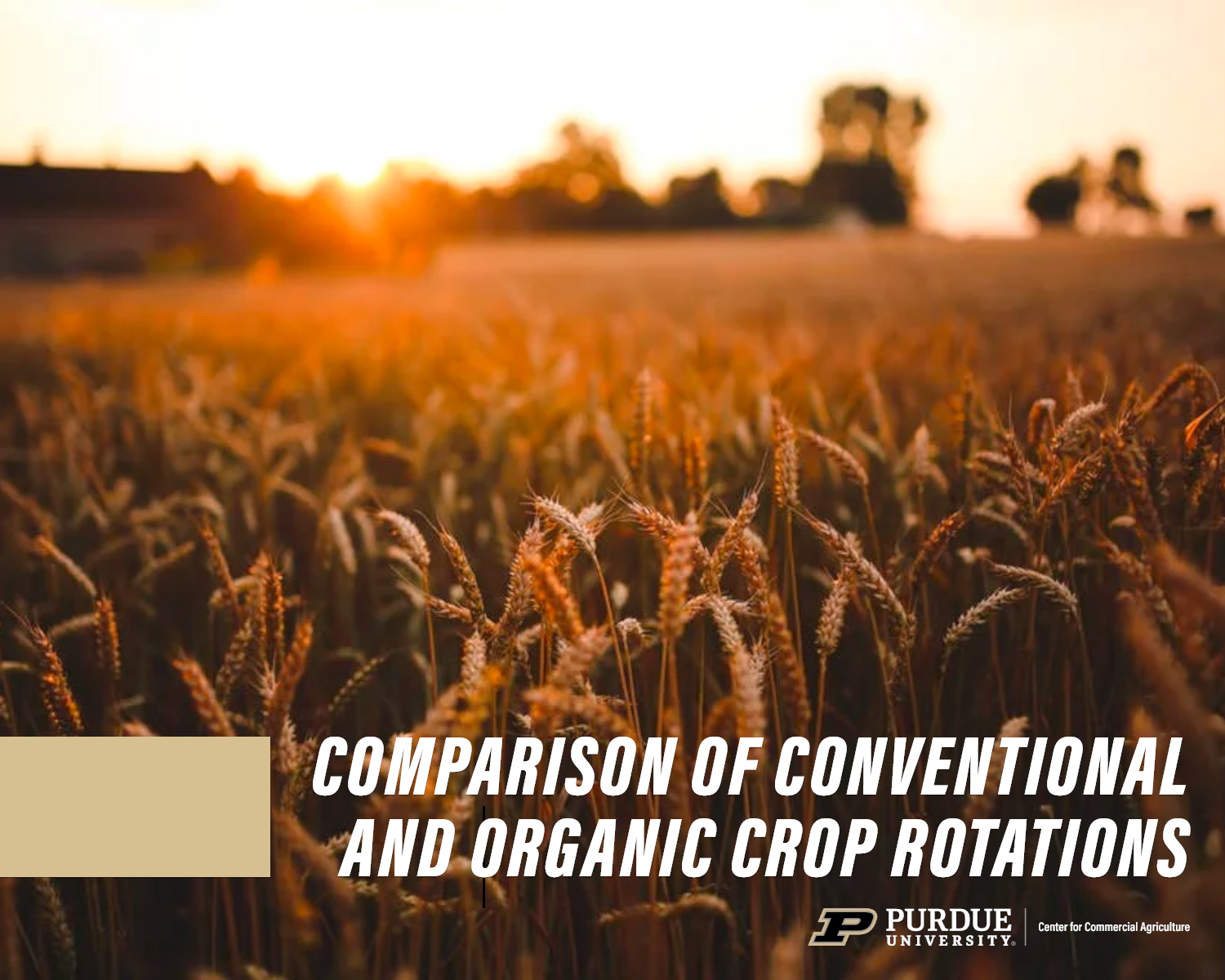 The Purdue Crop Cost and Return Guide offers farmers a resource to project financials for the coming cropping year. These are the December 2020 crop budget estimations for 2021.

Mark your calendar: Wednesday, February 10 at 12:30 p.m. EST for an updated corn and soybean outlook following release of USDA’s February Crop Production and World Agricultural Supply and Demand (WASDE) reports. Registration is free but necessary to receive the link to join live or get notice of the webinar recording.

The COVID-19 pandemic will be the defining economic event of 2020. As documented in the previous Purdue Agricultural Economics Report, the pandemic has had a profound impact on the Indiana food and agriculture sector. Land is the farm sector’s largest input, and as a result, farmland values generally reflect broad trends in the costs and returns of agricultural production. The 2020 Purdue Land Values and Cash Rents Survey suggests that farmland prices across the State generally improved on a year-to-year basis.